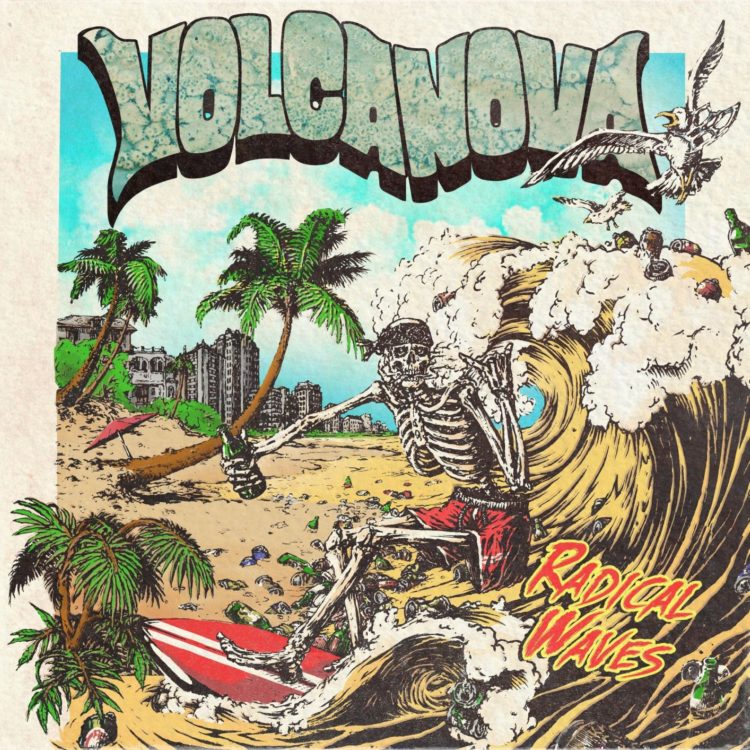 Hailing from Iceland and formed in 2014, Volcanova have flown the stoner and desert rock flag for six years. Despite a wealth of shows and tours with bands such as The Vintage Caravan, Radical Waves is their first full length release. And what a hell of a fun ride it is.

From the get go, the album art fully absorbs this experience. It’s chaotic yet admittedly mesmerising at the same time. A skeleton surfer smokes and drinks whilst leaving a trail of discarded cans and bottles behind in the rising waves. Up above, a seagull chokes on a six-pack ring.

But on with the album itself. Intro track Welcome features wailing distorted guitars and a classic doom vibe and riff that screams Black Sabbath. In particularly it reeks of Sabbath’s self-titled track as Volcanova use that famous dark satanic tritone to really up the gloom factor. It’s a smart move and a nod to the godfathers of metal themselves. Welcome is a huge opener and a strong indicator of being in stoner worship territory.

This then seamlessly blends into Where’s the Time which features an amazingly groovy bass line. I’m always overjoyed when I hear the bass so clearly and this is thankfully consistent throughout Radical Waves. After the bass is complimented by distant wavering guitars, the track kicks into full force.  The rhythms are so intoxicating and the chorus of “Oh no I wasted my life, Blasting through the night” is so damn catchy. There are so many tempting opportunities throughout to sway and groove, proving that Volcanova know exactly how to create memorable melodies and riffs.

Super Duper Van provides a more care free hard rock flavour. Especially with the hints of cowbell, an underrated instrument that can improve anything in my opinion. As the name suggests, Super Duper Van is such a fun song. Throughout the track there’s images in my mind of a jet fuelled Volkswagen camper van, soaring in the sky amongst swirling technicolour and floating daisies. But that’s just me. There’s an amazingly melodic chorus of “a never-ending ride in outer space, pedal to the metal I will never break” where the three members of the band harmonise as one. It’s immensely satisfying, especially as their voices blend so beautifully together. It’s a special thing for all three members of a band to be strong vocalists and Volcanova certainly use these talents to the full.

Following track I’m Off is simply bad ass. It begins with acoustic surfer style tones before kicking into one hell of a distorted riff that’s swaggering with unapologetic attitude. It’s the pure embodiment of the album art with the skeleton surfer wreaking havoc on the polluted beach. The riffs stomp along in a disjointed fashion, emphasising the lyrics of getting absolutely wasted. The song reminds me of what Canadian band Monster Truck could have been if they’d travelled down a heavier route.

Stoneman Snowman is a full instrumental besides from the occasional chorus line of the song title. It’s such a strong ambient piece that perfectly cultivates a melodic and psychedelic atmosphere. It’s still hard and heavy, particularly with the tone shift in the last minute where there’s some serious Cliff Burton style grooving with the bass. Yet it’s so beautifully tranquil at the same time. I’ve been personally quite stressed and overwhelmed with the pandemic situation lately and I can honestly say that the instrumental segments of this song washed a great feeling of calm over me. For that I’m very thankful.

Sushi Sam is the complete opposite, an undeniably catchy single that reverts back to the same level of fun in Super Duper Van. Mountain follows and the tone shifts once again as a low gritty riff stomps ahead with the strength of the subject matter.

M.O.O.D is a complete stand out. It begins with a wild west atmosphere and then descends into a crushing fuzzy doom metal riff. There’s a brief pause before it transforms into an absolute Frankenstein monster. It’s heavy and foreboding as hell, showing how Volcanova can easily switch from the light tones of Sushi Sam to a whole different breed entirely.

There’s a slight southern rock flair to Got Game, interjected with doom of course. There’s almost a marching band type vibe to the drums and bass around the four-minute mark whilst the lead guitar flourishes with hypnotic notes and bends.

Despite Lights being the last track, Volcanova still pelt ahead at full force. The riffs refuse to subdue into dullness, the vocals are still as commanding and harmonising as ever. There’s such a strong ethereal vibe in the middle section and beyond. The light addition of the ambient synth and all the instruments blending superbly together truly constructs such a refreshing and unexpected beauty in Volcanova’s sound.

This is a band that resides and stays true to the stoner and desert rock realm. However, Radical Waves proves that they’re not rigidly fixed to what these genres typically offer. Throughout the whole album there is excellent examples of heavy doom infused riffs and atmosphere that truly provides a hypnotic experience. Yet there are unique qualities too. There is beauty and distinctness to Volcanova’s sound whether it’s through the harmonising vocals or through the calm that their sound evokes. However, Radical Waves still offers incredibly bad ass riffs and songs about drinking and getting high. But it’s this variety and balance that will put Volcanova in good stead for the future.

I’m excited to see what they will produce next after this brilliant effort.