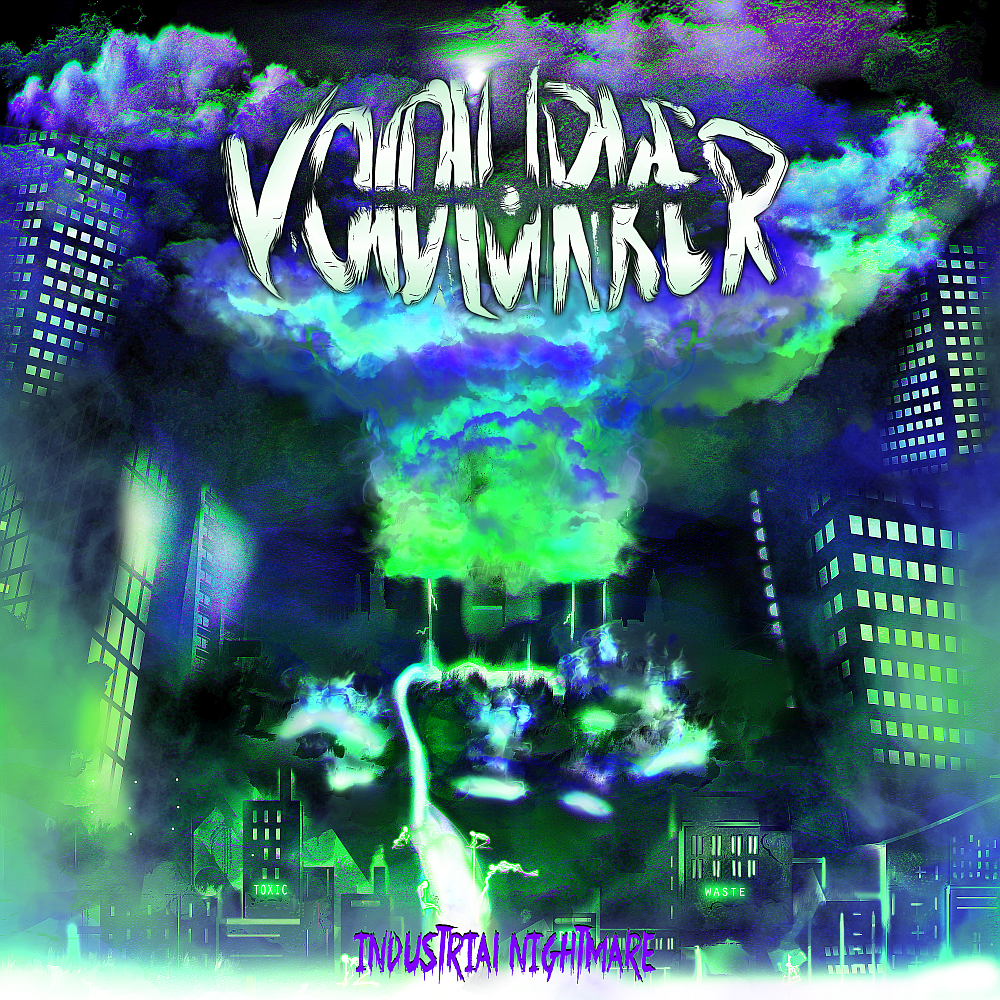 Brummie doomers Voidlurker seem to have appeared out of nowhere (perhaps from out of the void) in the last couple of years. Playing the Metal 2 The Masses Final in Birmingham in 2018 with only a handful of shows under their belts, before winning in 2019 and playing a spellbinding performance on the New Blood Stage at Bloodstock last summer, it feels as if they are the next big thing for British doom metal. With fat, crushing, but unpretentious riffs and a menacing atmosphere, their sound is familiar, but there’s not too many bands in the scene that do it as well as Voidlurker. It’s worth mentioning that ‘other bands’ in the genre might have several albums to their name – the Voidy boys only have this EP and a 2018 demo so far. Industrial Nightmare is the bleak sound of a grey city, produced expertly by Conan’s Chris Fielding. And it’s fucking brilliant.

Title track Industrial Nightmare kicks off the record, with a melodic riff that could be from a lost Electric Wizard track. Feedback squeals in, and guitarist/vocalist Brad Thomas grunts out a guttural ‘Blegh!’ to usher in their trademark Brummie darkness, throat-shredding vocals and pounding drums. Voidlurker carry a couple of riff ideas for four and a half minutes – without it ever feeling as if the song is dragging. Suddenly, the listener is snapped out of their haze and an evil, sludgy guitar line sneaks in. It’s absolutely colossal, and one of the standout musical ideas on the whole EP (there are a few, but we’ll get onto that). That’s not the end, though – Voidlurker show off an impressive hardcore-influenced section at the end of the title track, with the drums controlled to precision. The moshpits are only going to get bigger with time.

The humourously-titled Jeffrey Doomer follows, which as the story goes, came to lyricist Brad’s head one day, and he said it out loud without realising he’d said it out loud. It stuck, and became probably the strongest track on the EP. More down the sludge metal route, a catchy opening riff draws the listener in. Shortly before the two-minute mark, another verse kicks in, that truly defies the listener not to headbang along. The guitar tone sounds particularly bleak and apocalyptic as it chugs away. Eventually, the guitar and bass seem to die away over an air-drum-worthy percussion fill from Jack Bourne before we’re treated to the song speeding up and another ample opportunity to bang your head until it falls off your neck. Jeffrey Doomer is groovy and fun as hell. I can’t get enough of it.

Rotten Seed slinks in with another incredible riff. It’s got an evil but bluesy, stoner-influenced undertone to it, very much in the vein of Sleep. Of course, the fuzz pedals are kicked down upon, the volume goes up, and the riff sounds even bigger than ever after a minute or so. The song goes on in this dark, stoner-esque way for a while before a new riff takes over, causing hairs to stand up on the back of your neck, all the blues replaced with sludgy dirt. Again, one of the standout riffs of the album, and it’s helped by another highly effective tempo change that sneaks in out of nowhere and gets the heads banging. The song starts to decelerate to devastating effect, becoming more and more desolate as the BPM drops. We’re left with around a minute of fading, feedbacking, fuzzy guitars to contemplate.

Bitchcraft and Misery is more upbeat, and leaves you in good spirits. Who’d have thought doom metal could actually be fun? First heard on their 2018 demo, and countless live shows of course, another brilliant title and a standout lyrical (think Type O Negative) and vocal performance from Brad Thomas makes it the true anthem of ‘Industrial Nightmare’. The song and EP finishes on a chuggy, Black Sabbath-y riff, which, again, is designed to get the neck muscles going. A final scream of ‘Get away from me!’ draws the EP to a close, and you only wish there was more. As someone who’d seen Voidlurker 10-15 times before the release of the EP, it’s fantastic to hear the songs in a professionally recorded setup – and the sound is massive. Too often you seem to get debut EPs and albums (or even second and third releases) where costs seem to have been cut on the recording. Not ‘Industrial Nightmare’, though – every note rolls out with purpose and clarity.

Voidlurker might seem simple and one-dimensional to some critics, but beneath the fuzz and the haze you’ve got tightly measured tempo changes, rumbling bass lines from Andrew Rennie on the low end to complete the atmosphere, and chunky riffs and memorable lyrics at the front of the mix. Crucially, it doesn’t need to be complicated anyway. Voidlurker set out on a very clear mission, and passed with flying colours. The riff writing is exceptional. Voidlurker have the rare ability carry a single idea or two for several minutes without losing the listener’s attention, which is no mean feat, but then they’ll turn the song on its head. They’ll make you grin with the dark blues licks, and then your jaw will clench to the murky, sludgy filth on the other side. It’s really hard to pick a favourite song, a favourite riff, anything. Just buy it.