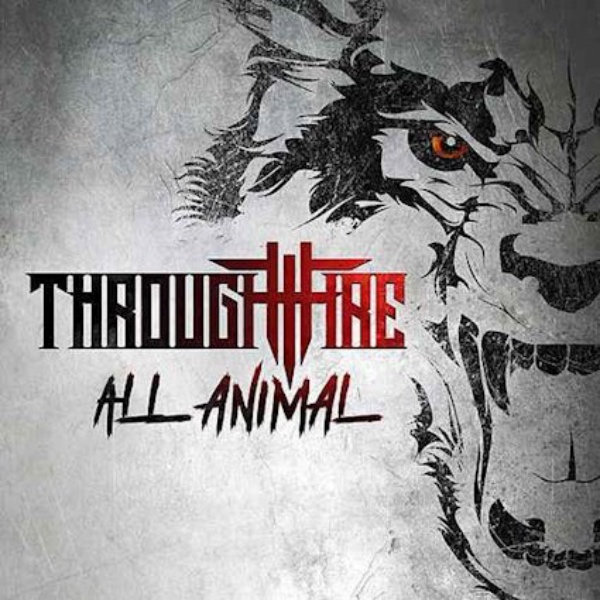 The second album from the Nebraska four piece, ‘All Animal’ has been long awaited. They created quite an impression in 2016 with the debut LP ‘Breathe’, the singles ‘Stronger’ and ‘Breathe’ were on the Billboard Rock charts for several months. ‘Stronger’ was the soundtrack for WWE’S Backlash and also used by NBC Sports. Through Fire have toured with Seether, Fozzy and Black Stone Cherry thus adding millions of Spotify streams and YouTube views in their favour and a massive fanbase.

Lead guitarist Justin McCain has produced ‘All Animal’ in his hometown, at Omaha’s Make Believe Studios,it is out now on Sumerian Records.  When asked about the meaning of the title – “I was just describing what it felt like to snap,” Justin explains. “When Someone keeps pushing you to the limit, that’s when you become all animal. The human side shuts off. Everyone has a breaking point”.

The album starts with the title track and the words ‘I’m gonna sharpen my teeth on every stone you throw’ which sums up the ‘take no shit’ attitude of this recording. It’s a throbbing and grinding beginning, heavy, yet running melodic on a parallel. My initial thought is this sounds a little like Stone Sour, who hail from just over the state line in Iowa. But the next number ‘ Medicine’ has an electronic vibe, with more dynamic and smooth vocals from Grant Kendrick. After playing it a few times I grasp how commercial it sounds. It’s back to groove laden thrash on ‘Sick and Tired’ which contains some superb riffs. ‘Listen To Your Heart’ has more of the electro pop, but is a mix and a tremendous ballad. Comprising of a fine guitar solo and a building chorus, it’s a powerful message.

The direction takes a slow and more laid back route on the mesmerising ‘Die Sober’ a beautifully written song, drumming from Grant Brooks keeps the tempo clear with the minimum of pressure. ‘Breaking Point’ is another punchy track, I love the diversity on this album, different sound waves that compliment each other to make a fantastic listen. ‘If You Love Me, Leave Me’ spells tears before it starts, a melancholy hard driven one that tests Grant’s vocal range. The lower cries continue on ‘My Son’ which provides strong bass by Kyle Leblanc. Ending on ‘Wake The Dead’ a rocker crammed with murderous guitar riffs and pounding drums, I am left in awe.

Through Fire are one of those bands who can deviate their style and remain captivating. ‘All Animal’ is a wholesome blend and it’s well worth getting a copy, Click HERE for details. Currently on tour in the US, I think a UK/ European visit would be well received.