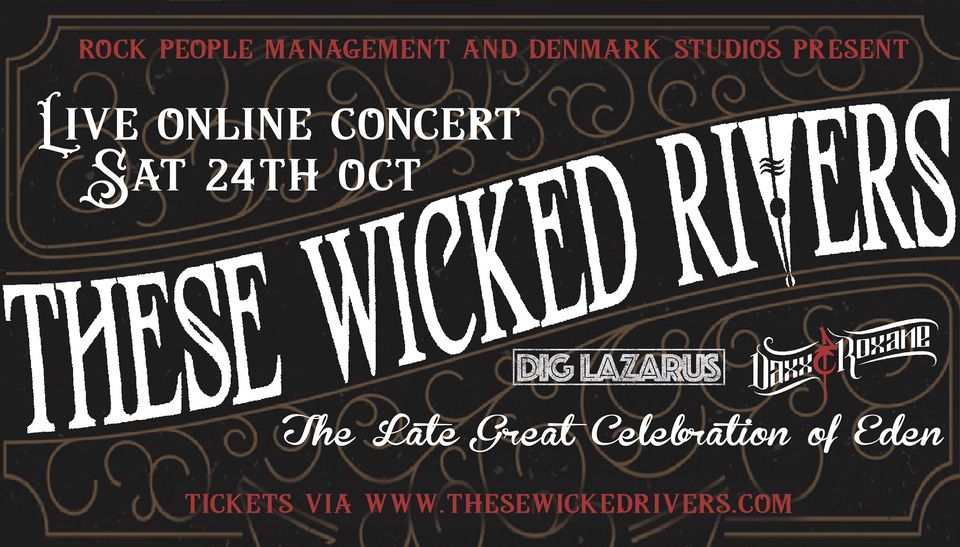 Depending on the Governments Covid postcode lottery, attending a socially distanced gig is slowly becoming more frequent. However, for most of us, we are getting used to watching bands online with the streaming events. Not quite the same as seeing a band live on stage, but they are now an acceptable way of supporting the music scene and your favourite combos. So I didn’t hesitate to cough up 12 quid to see 3 bands, courtesy of Rock People Management and The Denmark Studios. The other good thing about this, is that it’s available to view over the next 7 days. So if you are busy on the first night, you don’t miss out.

I saw Dig Lazarus a while back in Sheffield and was blown away by the amount of energy they have. Not a band to cruise along to, fast and furious is their motto. Given about an hour they have time to dish out over ten of their own compositions and sneak in a fabulous cover of ‘Jumping Jack Flash’. Being heavier than many of their contemporaries, with lashings of riffs and a Punk edge, Dig Lazarus offer you an opportunity to headbang and cause chaos in your own living room tonight. You have to admire frontman Ash Tustain, who performs lead guitar as well as singing non-stop throughout, he’s a little like a young Jack Black, not only in appearance, but with the off beat humour as well. Up alongside is Atticus Hall-McNair on bass and backing vocals and at the back sits Jack Cotterill. The bond between the trio is quite evident, no wonder, as they have all known each other since their University days. The last EP ‘Figured It Out’ was released in 2019 and featured on major radio stations. They have previously toured with the likes of Crobot and Idlewar, but I think they deserve more attention and a headline tour is be something they should be aiming for.

Daxx & Roxane are Swiss nationals based in London. Maybe it’s all that cheese and chocolate, but this is one band, who’s energetic performances are never below 100%. Every time I have seen them they give it all they can muster and they are the most friendliest of guys you could hope to meet. Tonight on screen, with tracks from both albums, it was a such a pleasure to watch them. Songs from ’Ticket To Rock’ the first album, start the set, the title track and ‘Girl Next Door’ are solid screaming rockers and are ideal to get the temperature rising. New songs ‘Without You’ and ‘Strange Woman’ offer some bluesy swagger and there is added depth with the magnificent ‘Dawn’ and sublime ‘Heal’.They are both precise, meaningful and contain a vast amount of technique. D&R have grown and matured over the last year, there is an increase in the balance and the result is stunning. Cedric Pfister on vocals, grasps your attention with his good looks and impressive bass playing, while Luca Senaldi, wearing his trademark headband, keeps it all together from behind the drums. ’Fast Lane, ‘Lust & Love’ and particularly ‘Sugar Rush’ up the tempo. On the small stage, guitarist Cal Wymann’s movements are limited, he usually likes to jump off things and run around a lot more. But that doesn’t stop him from moving about as much as he can and jumping over the other guitarist Simon Golaz, who is lying on the floor. ‘Good Vibes’ from the debut album is last up, what a treat it’s been to see them again.

The intriguing and captivating ‘Tea Leaves’ is the introduction to ‘Eden’ the debut album from These Wicked Rivers . The video for the song also plays, before we see the band on stage. Having seen ‘the death of humanity in Mama’s Tea Leaves’, we have at least an hour to saviour – The Late Great Celebration Of Eden’, that came out last May. A few from ‘II’, the 2017 release of 7 songs also makes up the set. ’Shine On’ and ‘Evergreen’ both from ‘Eden’ came out as singles and demonstrate why TWR have built up such a huge following. Appearing like Mountain men from the Wild West, the quartet are actually from Derby and have been together since 2014. Influenced by 70’s music and the likes of Clutch and Black Stone Cherry, the mix ensures the band have a blend all of their own. From ‘II’ the soulful ‘When The War Is Over’ takes us to another level, vocalist John Hartwell has texture like no other and the screams of guitarist Arran Day’s Gretsch, make the perfect partner to his warm tones. Back to ‘Eden’ and the more flowing ‘Money’ and ‘World In Chains’, precede ‘Testify’ another from 2017. Full of groove and low structured riff, ’Testify’ is an outstanding track, the band look at ease and Arrans playing is awesome to witness. A local man to the band called John, who you see in their videos, is the character behind ‘Floyd’ and the song is a pleasant little number with loads of strength. Again there is impressive guitar and the drums of Dan Southall, stack up to give the song plenty of bulk. After the more earthy ‘Won’t Be Broken’ it gets quite psychedelic and fervent, when they bring it to a close with ‘Don’t Pray For Me’. The finale leaves the Gretsch on the floor providing feedback from the Marshall Amp and a final push on the pedal board from Arran. Summing up a brilliant performance that was totally absorbing.

In between the three main performances, we saw brief interviews by Anne Estella from the recent Webfest 3 and some footage of Dead Mans Whiskey, Liberty Lies, Kris Barras and Massive Wagons. The latter playing ‘Back To The Stack’ which is just one of their incredible numbers. Also adverts for the upcoming Webfest 4, which is packed to the rafters with some awesome bands lined up. Check that out HERE. Good to have some breaks in the proceedings and an ideal way to promote other outfits and events.

Yet another Saturday evening of staying in and watching an online show, but it was really captivating and I loved a lot of the new tracks. With no sign of things getting fully back to normal for a while, this is something we can do to support bands and the music industry. I am all for it and it doesn’t take much effort to get involved.

The event was produced and Directed by Jeff Cooper