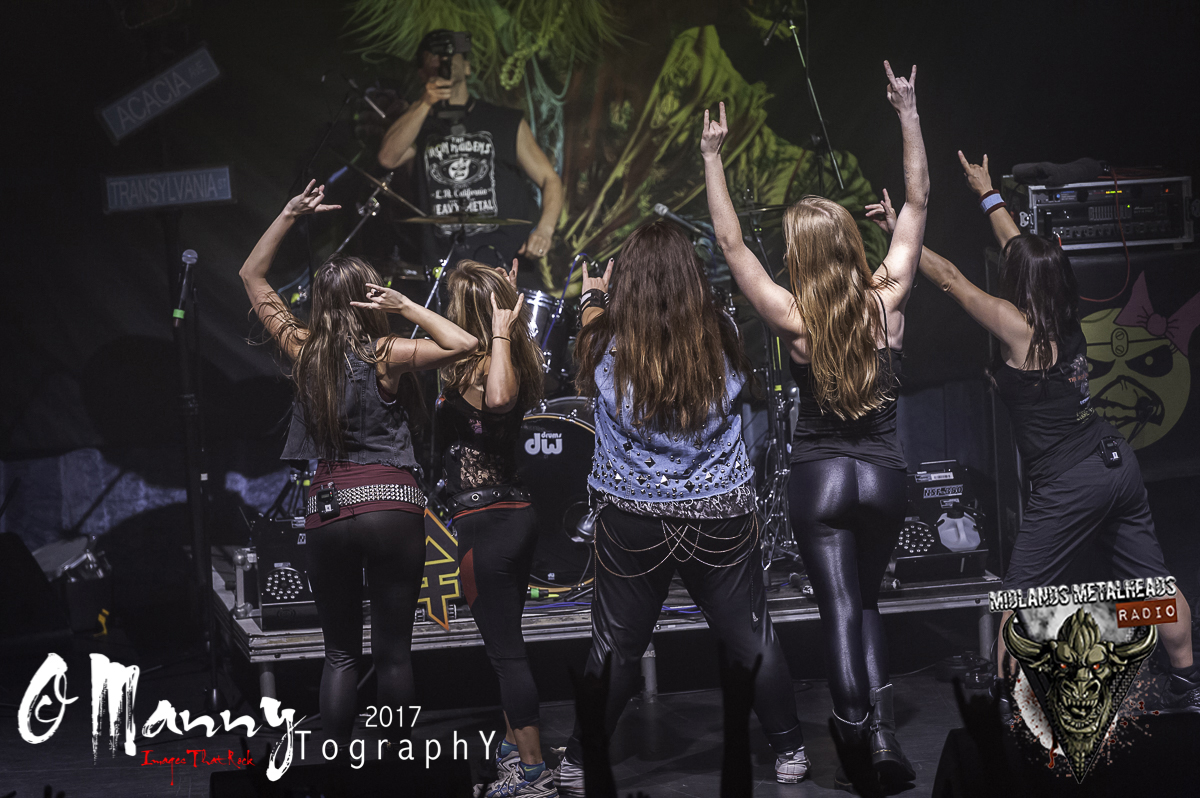 Tribute bands, a hotly debated subject amongst fans young and old. I’m not going to get into the politics of it all, I’ll leave it by saying ‘Live music keeps venues open’ If the act has the blessing of the original act even better! If you’re a die-hard Iron Maiden fan then I guess a tribute band is not something on your agenda, however, if it’s played by five very talented, and let’s face it better-looking musicians, of the female variety, then I guess it’d be rude not to give them a chance.

The Iron Maidens, a quintet of gorgeous girls playing some of the most demanding heavy rock music out there and playing it damn well. Having travelled from L.A. they have embarked on a short U.K. tour consisting of just 5 nights before heading to Europe and then back to a stream of dates in the U.S.

Leamington Spa is the second night in and I find myself in a queue of like-minded, and dare I say it, aged men. As we form a sedate line, like sheep waiting for a dip, talk goes to women in rock and whether they can cut it.. we shall see.

Once inside were greeted by a very pink stage and lots of the dreaded fog! Oh, joy another Rescue Rooms! The pink smog gives Edwina, the backdrop, an almost ethereal look as she stares out at the assembling crowd.

And we wait! but not too long, bang on time the girls appear on stage to much wolf whistling and cheering, a cheeky grin here, and a tongue out to the togs in front of Courtney as she starts up her industrial-sized fan, Reg Richardson managed a cracker of a shot!

‘Aces High’ is how the girls choose to start tonights set, a setlist that combines old and new, some that Maiden will probably never play live again.

The guitar work is ably addressed by  Courtney ‘Adrianna Smith‘ Cox and Nikki ‘Davina Murray‘ Stringfiend, as they power their way through the opening song. The crowd seem impressed as they cheer and thrust horns wildly into the air. Linda ‘Nikki McBurrain‘ McDonald and Wanda ‘Steph Harris‘ Ortiz complete the band on drums and bass guitar respectfully.

The industrial sized fans in front of Nikki and Courtney are showing their worth as their hair hangs in the breeze like its full of static, a clever look and one I’m sure they’ll enjoy as they warm up. They tease the gathered crowd with their goings into and out of the blast, hair flailing as they show what they can do.

Eddy makes an appearance as does the Devil and the Reaper..ok the show doesn’t have the £million budget of the big guys but it works as Courtney duels with a gun-toting Eddy who ‘dad dances’ his way around the stage in a terminator fashion.

Having played the U.K. only once before, one date in 2016, the crowd that had now gathered must be well over the 500 mark. So is the pull of this tribute band. Heralded as being the best Iron Maiden tribute in the world it is very easy to see exactly why that would be.

Carrying on saw the band play some truly outstanding songs. Kirsten aka ‘Bruce Chickenson‘ has the lungs capable of doing Bruce proud. She seemed to be having fun onstage and why not the U.K. is home to some the best rock bands in the world. She struts around in a red tunic waving the Union Flag as a lead into ‘Trooper’.

The crowd were given the choice of ‘Rime’ or ‘Alexander the Great’, a song never played live by Iron Maiden to date. Leamington Chose ‘Rime of the Ancient Mariner’ and nailed it, it looked like Courtney wanted to play Alexander though. Maybe tomorrow night.

Old favourites ‘Number of the Beast’, ‘Phantom of the Opera’ and ‘Fear of the Dark’ finished off the set. The girls quickly reappeared after checking their makeup (pun) and finished the night off with ‘Running Free’ and ‘Iron Maiden’.

Posing for selfies at the end of the night saw the girls turn to face the camera held high above Linda’s drum kit. Showing the crowd their behinds resulted in whups and whistle’s galore. A clever way to ensure the picture is awesome!

Would I see them again? you betcha, I have tickets for the following night in Sheffield. Next tour? Every night seems to be the challenge !!

The Iron Maidens are:-

Children of the Damned

Rime of the Ancient Mariner or Alexander the Great

Number of the Beast

Phantom of the Opera

Fear of the Dark