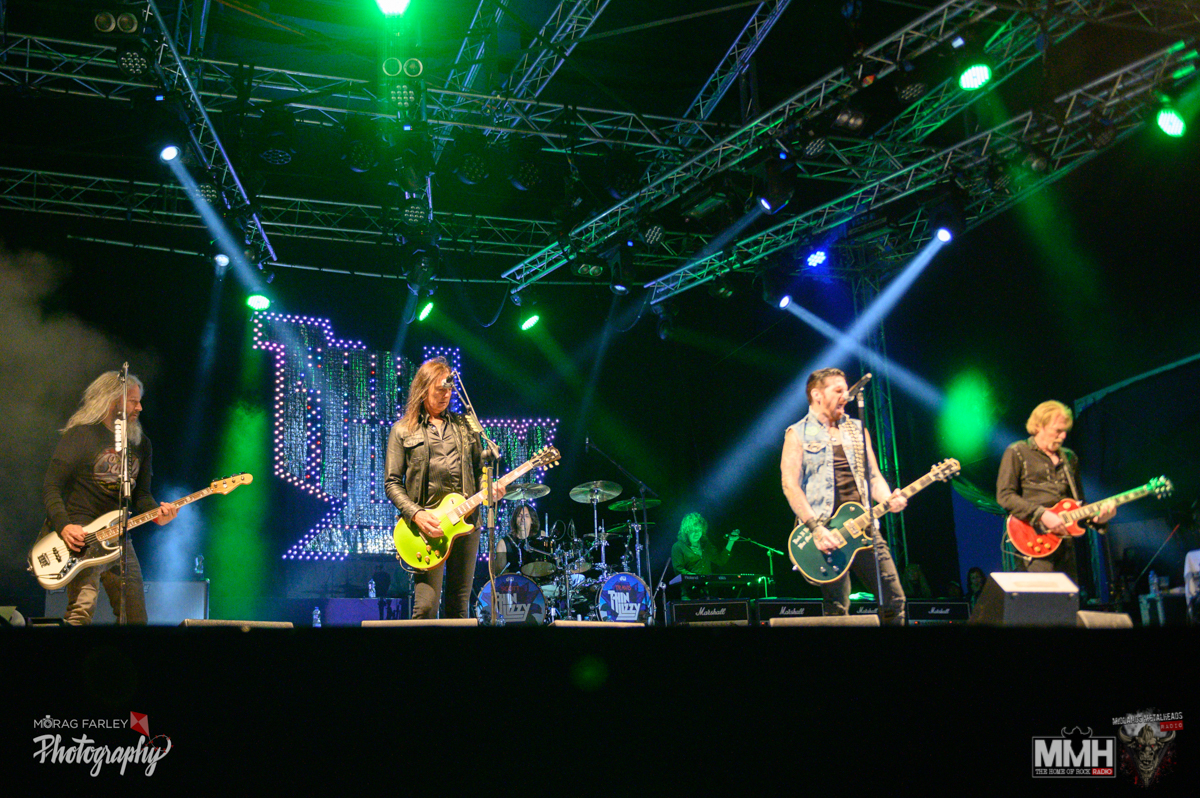 It’s Day 3 already and my last drive up the mountain, my concentration, while trying to avoid the rocks, is broken with the speed limit signs, quoting lines like ‘It’s a long way to the top if you wanna rock n roll’ and ‘You’ve reached the top of misty mountain hop’, certainly makes the trek more fun. Getting up here early, I have to wait in the queue, but it’s only a minor delay and I am soon heading down the front again. Great thing about Steelhouse is there’s only one stage, so no crossover’s, you don’t miss any bands and you only have a short wait between them, as the team are really well organised.

Openers for the last day are WILLE AND THE BANDITS, up from Cornwall, Wille, Drew and Matt are a combination of blues, folk and rock, so a good choice to break the Sunday morning silence. Although up here, we are miles from the nearest house, perfect location for one of Wales’ biggest festivals. Since they started out in 2010, Wille and The Bandits, have gained a long list of impressive followers, Bob Harris ‘Loves the Soul in their Music’ and Joe Bonamassa is quoted as saying ‘Wille is a superb slide player’. They are known for the varied collection of instruments they play, I like the mix of sounds they create, the use of the Lap Steel today, proves they are so multi-talented. Plenty from the new album ‘Paths’ and the latest single ‘Find My Way’ is exceptional. See them somewhere again in October when they hit the road for a pile of dates supporting the Kris Barras Band.

The AMORETTES have recently undergone a lineup change and are now a 4 piece, combining Tequila Mockingbyrds, Josie O’Toole on drums and Jacinta Jaye on bass with Laurie Buchanan from Aaron Buchanan and The Cult Classics playing rhythm guitar, they all join founder member, vocalist and lead guitarist Gill Montgomery. ‘Born to Break’ is the first number, the title track from the 2018 release. Very impressed with this combination, I saw Laurie with ABATCC a short while ago, she was pretty steadfast then, so with the added experience of the Mockingbyrd pair, Gill fronts a now more aggressive and tightly knit pack than ever before. ‘Let The Neighbours Call The Cops’ from ‘White Hot Heat’ continues the relentless pace and the Steelhouse audience are loving them. The 40 minute set is brought to a storming finish with ‘Bull By The Horns’ from the album ’Game On’ and ‘Everything I Learned,(I Learned From Rock n Roll)’ another from the last LP.

TAX THE HEAT are something else, they have this Jazzy Funk-Rock kind of sound that’s hard to put in a box, punchy songs that don’t mess about, smooth guitar and ultra cool vocals. Great to watch, these guys offer up style with a dapper dress code that kills. ‘Change Your Position’ self titled song off the new album, introduces the uninitiated to the upbeat band from Bristol. With plenty more from that album and a few from the adorable ‘Fed To The Lions’ they end on that titled one from 2016 and the crowd were totally up for them. Another great decision to put these on the bill and at 3pm in the Sunday afternoon sunshine, they shone.

All the way from Toronto DANKO JONES are new to me, I know, where have I been for the last 20 years! I hear a lot of praise from friends, so I decide to get down to the barrier and check them out. Effortless is the key word, stripped back rock and roll and the 3 man crew are in full flight from the off. ‘I Gotta Rock’ gets us going and Danko is a natural. After 3 songs, the photographers start to drift off as is customary, rules and all that, to which Mr Jones hails them in abuse , ‘hey where the F**k are you going, I haven’t even got warm yet’! Needless to say they decide to risk it and turn around, I don’t think he was joking either, wow does that man mean business. A lot from the ‘A Rock Supreme’ this years long player, we sing along to ‘Dance, Dance, Dance’ even though we haven’t heard it before, it’s an easy chorus to follow. ‘Burn in Hell’ and ‘We’re Crazy’ continue the amazing show and the rawness is superb. Danko states that rock and roll isn’t supposed to be 10/10, if you want that, go wherever that is, 7/10 is how it should be, got to agree with him there. It does cover him for any errors during his solo as well. Lots of humour, maybe too much for some, but I was thoroughly entertained.

It’s been a while since I last saw URIAH HEEP.  I remember in my youth, listening to ‘Demons and Wizards’ and ’The Magicians Birthday’ completely enthralled. Only Mick Box remains of the original band that formed 50 years ago. Playing guitar today, in the early evening sunshine, you would never guess his age, he looks so good and he is note perfect. Aptly titled ’Grazed By Heaven’ and ‘Living The Dream’ begin the 75 minute set and what a show, Bernie Shaw has been the vocalist since the mid 80s so he’s no stranger to the Heep family limelight, a fantastic frontman. ‘Gypsy’ from the 1970 ‘Very Heavy, Very Humble’ is as striking today as it was then, I am blown away by how brilliant the band are, I had forgotten that they are absolute virtuosos. Ending on ‘Easy Livin’ from ‘Demons and Wizards’ which also goes back to the early 70s, makes me feel fortunate to have grown up with all of this. However, judging by the crowd, who they wooed here today, I think they have gained a fair number of new and young admirers

LIVING COLOUR are also celebrating, it’s been 30 years since the release of ‘Vivid’. The New Yorkers are also bathed in the evening sun, Corey Glover in a red suit and hair a flamboyant shade of purple, is the most charismatic of vocalists. Back in 1990 I loved the ’Times Up’ album and its title song is the first they play. I do question the idea of putting them on this late and after Uriah Heep, as the fusion of Jazz, Soul and Rock is not the most powerful for a penultimate act. Nevertheless, they are going down well, the mass of people with their hands in the air, proving me wrong. ‘Love Rears It’s Ugly Head’ again from ’Times Up’ is a smootchy groove and after the essential ‘Nothingness’ and a cover of Junior Murvin’s ‘Police and Thieves’, they are joined by Bernie Marsden, ex Whitesnake, who supplies the strings for Creams ‘Sunshine Of Your Love’. Playing ’Cult Of Personality’ which must be their best known track, lifts the spirits even more and during the encore Corey dives into the crowd to get up and personal with the fans. So in the end it’s a winning show, the only boo’s were when Donald Trump’s name was mentioned!

So we reach the final band of the weekend, THIN LIZZY and yet another album being honoured is ‘Black Rose’. 40 years later the band consists of Scott Gorham on guitar, Darren Wharton on keys, Ricky Warwick on vocals and Damon Johnson also on guitar. For this show they have recruited Scott Travis of Judas Priest for drums and on bass Troy Sanders from Mastodon. So after the blazing starter ‘Jailbreak’ and ‘Are You ready’ they play ‘Black Rose’ in its entirety from ‘Do Anything You Want to’ to ‘Roisin Dubh (Black Rose) A Rock Legend’. Of course these guys have played together in various forms over the years, not just in Lizzy, but as Black Star Riders, so the songs are extremely polished. You can tell by the way the music flows, hardly catching breath between the songs, that this is a well practised performance. ‘Cold Sweat’ , ‘Rosalie’ and ‘Bad Reputation’ follow on and Warwick is on form tonight. Johnson and Gorham walk to the front, with such poise and I am so impressed with the sticks of Travis, I’ve never really watched him before tonight. We get 3 more from ‘Jailbreak’, being ‘Emerald’, ’Cowboy Song’ and The Boys Are Back In Town’ before the encore that can only be ‘Whiskey In The Jar’ which they give an Irish Folk introduction, as the original would have been heard. Wow, that was the quickest 90 minutes, it flew by. Absolutely loved it, what a fitting end to Steelhouse this year.

STEELHOUSE thank you, it has been so wonderful, watching some of my favourite bands and discovering new ones. We’ve had three days of beautiful weather and it’s been so much pleasure, to meet up with friends, make new ones, while bumping into random people and just socialising. Can’t wait for next year.