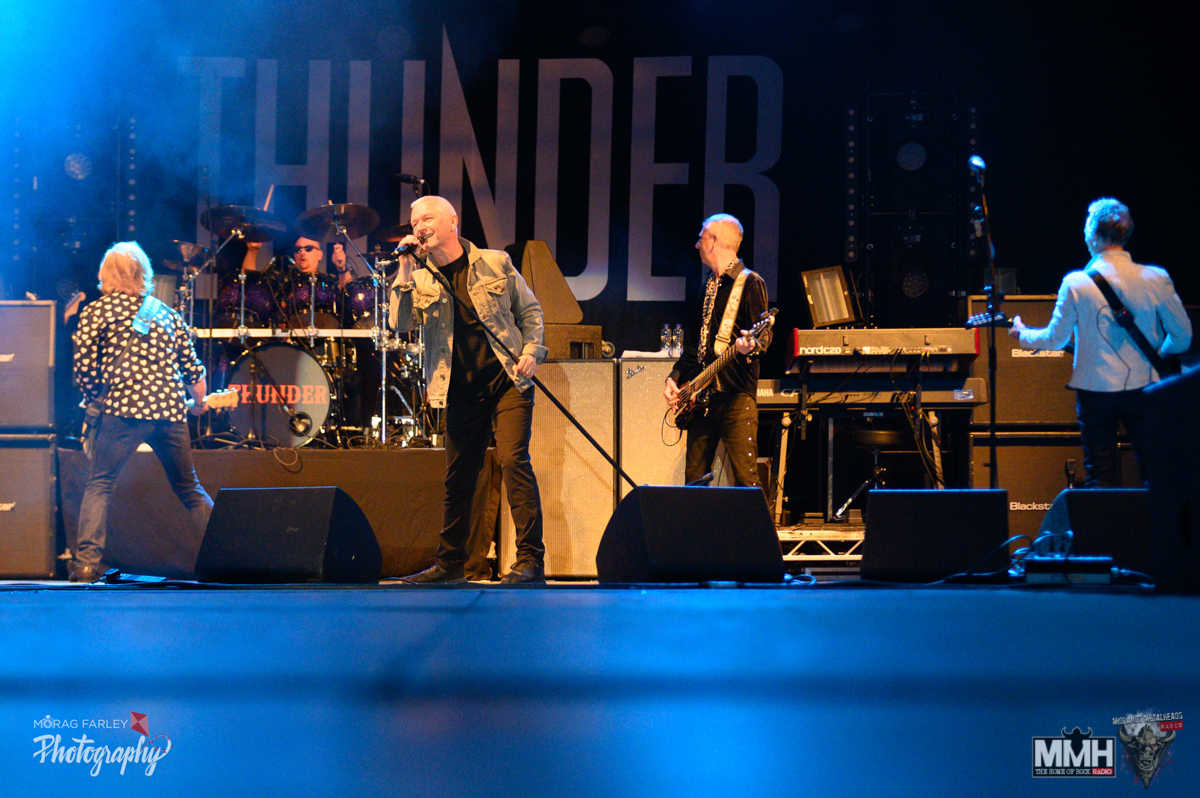 Day 2 of the festival and it’s a lovely day again. The site is filling up early and anticipation is running high, there are 8 bands on today and some real crowd pleasers. Have to congratulate the Steelhouse organisers, they do a fantastic job, it is so well run and the staff are all so friendly. Anyway, better make my way to the front for the first outfit.

All the way from Wednesbury in the West Midlands, LIBERTY LIES are one of the bands of the moment. Having won the ‘Best New Wave Band’ at the recent Black Country Music Awards, they are on a roll. Following that, they have just landed support slot to Inglorious on their next tour. The new single ‘United Nothing’ is a strong message and the performance today reflects that. Originally a 5 piece, now 4, Liberty Lies are more commercial these days and the change has not done them any harm. A full on show and they have attracted quite a lot of new fans. Great start to Saturday, I met up with them in the bar afterwards, a really likeable bunch.

I have been a fan of RYDERS CREED since seeing them at last years Breaking Bands Festival. What a show on the big stage this lunchtime, they have progressed so much in 12 months, unbelievable, so much energy as well. Ryan Antony’s voice is 100%, as he commands the floor. Guitarists Lee Spencer and Myles Cooper race around with big smiles, you can tell they are really pumped for this. Fast becoming regulars at festivals, the rise of Ryders Creed is well deserved. You smashed it guys.

HOLLOWSTAR frontman Jo Bonson is such a happy chap, today he is on the same bill as Thunder, the band that made him decide to get into music. Listed as one of Planet Rocks ‘Ones To Watch’, the 4 from Cambridgeshire are one of the busiest on the circuit. They have a huge following, just count the T-shirts among the audience. A lot from the recent self titled LP is played, it’s another brilliant set. I love watching these and of course the whole of the Steelhouse crowd join in, to sing ‘Bye Bye Baby Goodbye’ the chorus from ‘All I Gotta Say’. See them later in the year on tour with Skid Row and at Winterstorm. Check out the album it’s awesome.

All the way from British Colombia in Canada are THE WILD! and they are just that, party animals with a capital P. These down to earth rockers, dressed all in black with tattoos and an extraordinary moustache, are well received by the Steelhouse throng. I’m guessing many haven’t witnessed Dylan Villain and crew before, so this is an encouraging sight. After seeing them at HRH I was impressed with their ‘hit them hard’ style, swinging the guitars around and just having fun. Now on tour with Rose Tattoo in mainland Europe, hope they come back over soon.

Appearing at 4.30pm are CROBOT, probably not the band you would have expected to see at this time of day. The American groove rockers are fronted by the colourful Brandon Yeagley who is resplendent in a very glitzy outfit. He stalks the stage while Chris Bishop on guitar and James Lascu on bass, stand firm. There’s not an enormous crowd watching, well it is tea time, but they do impress the faithful. A new album ‘Motherbrain’ is out soon and no doubt it will be another stunner from the Pennsylvania 4.

They started out in 1987, but took a long hiatus, now they are back and GUN have definitely been on the up since 2012. The aptly titled album ‘Break The Silence’ was well received and they continue to provide their own brand of steady rock and roll. Yes we get ‘Word Up’ it has to be played, probably one of the best covers ever. A great entertaining band live, they prove a hit, just like they did in 2012 when they last played Steelhouse. Catch them in December on the 3-0 tour with FM and Dan Reed Network, when they will be playing the ’Taking On The World’ album. Whoa I need a rest now, time to grab something to eat!

THE TEMPERANCE MOVEMENT are fresh off the plane from their US/Canada tour, but they don’t appear jet lagged at all. The audience has now swelled, it’s 7.45pm and these are the penultimate act, TTM have a massive following. The grooves are in abundance, with hefty riffs and that large feel of Southern blues rock. A really good choice for Steelhouse, there is over an hour of easy going, melodic songs and the sun goes down slowly to provide the perfect ambiance. With tracks from ‘A Deeper Cut’ which came out last year, Phil Campbell on vocals/ maracas and Paul Sayer on Guitar are so captivating to watch, unbelievable that they have been around since 2011, how time flies.

Time for the headliners and no strangers to Steelhouse, THUNDER who are celebrating 30 years together. This is the only appearance for a while, apart from a couple of Christmas shows and one to promote the Greatest Hits album, so we are honoured tonight. How can you remain so polished and still have that enthusiasm after all these years? They are faultless, Danny Bowes still has one of the best voices in the business and we all love Harry James, the virtuoso on drums. ‘Backstreet Symphony’ was one of the best albums in 1990 and they include a couple from that tonight. It’s a tremendous finish to Day 2, there are smiles all around me and as we head back to our beds, there are still echoes of Thunder being sung in the air.

Another awesome day at Steelhouse, I think it’s the best I have been to already and there’s still Sunday to go.