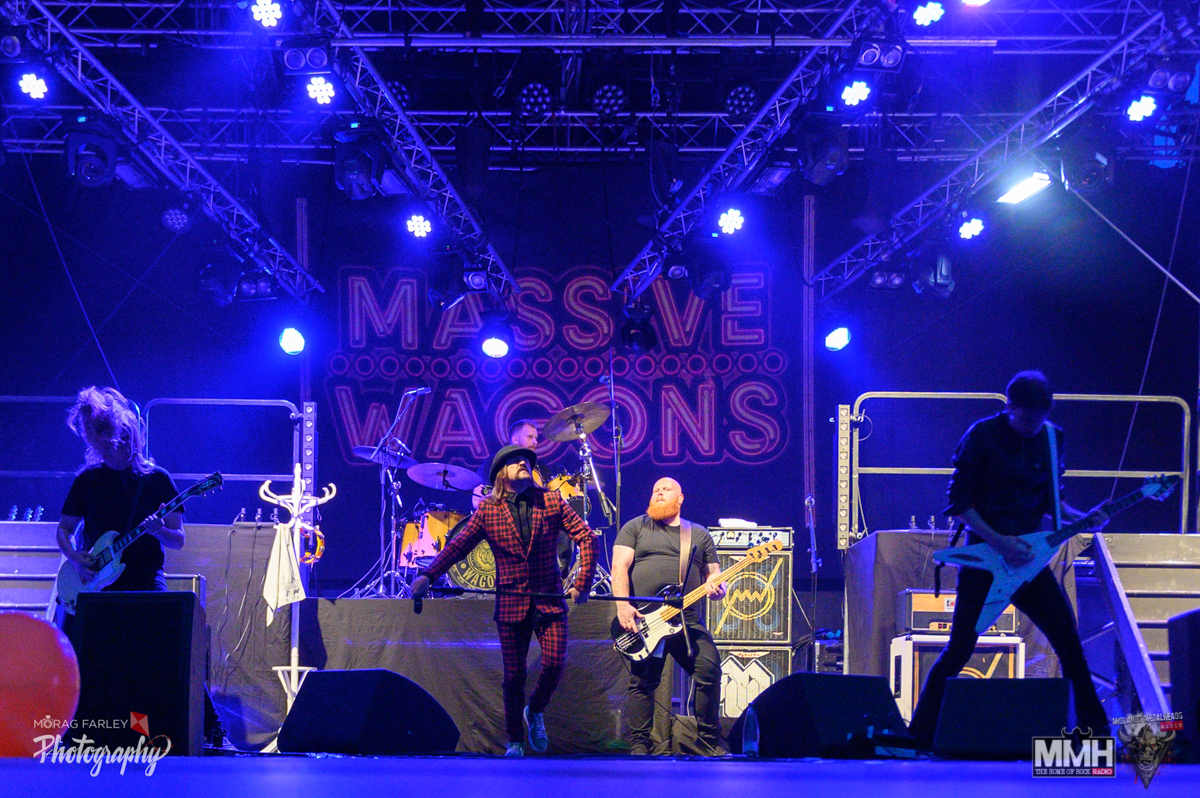 In its 9th year, this well organised and friendly festival, is one that’s always a pleasure to attend. After a steady climb up the mountain and the rock strewn farm track, it’s only a short walk to the main site, which is a good size and has abundant stalls and a decent Bar. This year there is a large open marquee where you can take shelter and still see the stage. With camping and parking also close by, what more could you want?

The Three day event kicked off today at 6pm. There are 4 bands on the bill each from a different part of our shores, so its 4 nations Friday. I am up here ready for BLACK WATER CONSPIRACY from Northern Ireland. Led by Phill Conalane, who you may remember seeing with Mike Gray last year. It’s a straight Rock and Roll set, they get the Steelhouse crowd in a rocking mood from the beginning. Their version of the Black Crowes ‘Jealous Again’ goes down a treat. Describing themselves as Blues, a bit of Country and RnR, this is just the ticket for an afternoon at a festival. The 2017 album ‘Shooting The Breeze’ was well received and the band have previously enjoyed appearing at Download and The Ramblin Man Fair. A tour has been announced for November, so get booking.

THE RISING SOULS are the Scottish band for the 4 nations line up, stuck on the motorway getting here from Edinburgh, they just about made it in time. Frontman Dave Archibald has one hell of a voice, smooth and powerful, nothing is beyond his range. With his arm in a sling, he still manages to dance around the stage, not still for a second. Rising Souls continue the groove ridden rock and bluesy feel, with Soundgarden, Rival Sons and QOTSA as influences, you get the idea. A fantastic performance today it was soulful and majestic. Popular on the festival circuit they are another band destined for more success, Listen to their EP ‘Set Me Free’ which is available on all platforms, for a perfect introduction.

Well the weather is warm and sunny, the atmosphere is glorious and it’s the turn of the Welsh. THOSE DAMN CROWS are no strangers to the mountain, they only come from Bridgend. Ronnie Huxford on drums is on form today and Shane Greenhall takes time to sing from behind a keyboard. They kick off with a new track, ‘Who Did it’ , which is from their second album which will be released ‘soon’ (The sooner the better!), with most of the set coming from the excellent album ‘Murder And The Motive’ which was released last year. With their own brand of energetic rock, they are increasingly in demand. Great to watch, so entertaining, they finish on ‘Rock N Roll ain’t Dead’ and these guys prove it.

The English headline tonight, MASSIVE WAGONS are firm favourites at Steelhouse. Baz Mills is a charismatic frontman, I love the coat stand on stage with his hat and jacket, waiting to be grabbed. We hear a few from the last album ‘Full Nelson’, during the hour long performance and what a show it is. The crowd are in full festival spirits with hands in the air throughout. Having been on tour with The Wildhearts, Dead Daisies and Thunder in their 10 years together (yes 10!), they have picked up so much experience and it shows. Incredible end to the first day.

As I head back down the mountain, I am still buzzing from the amazing 4 bands I have seen today. Need to get some sleep now, tomorrow is going to be huge!