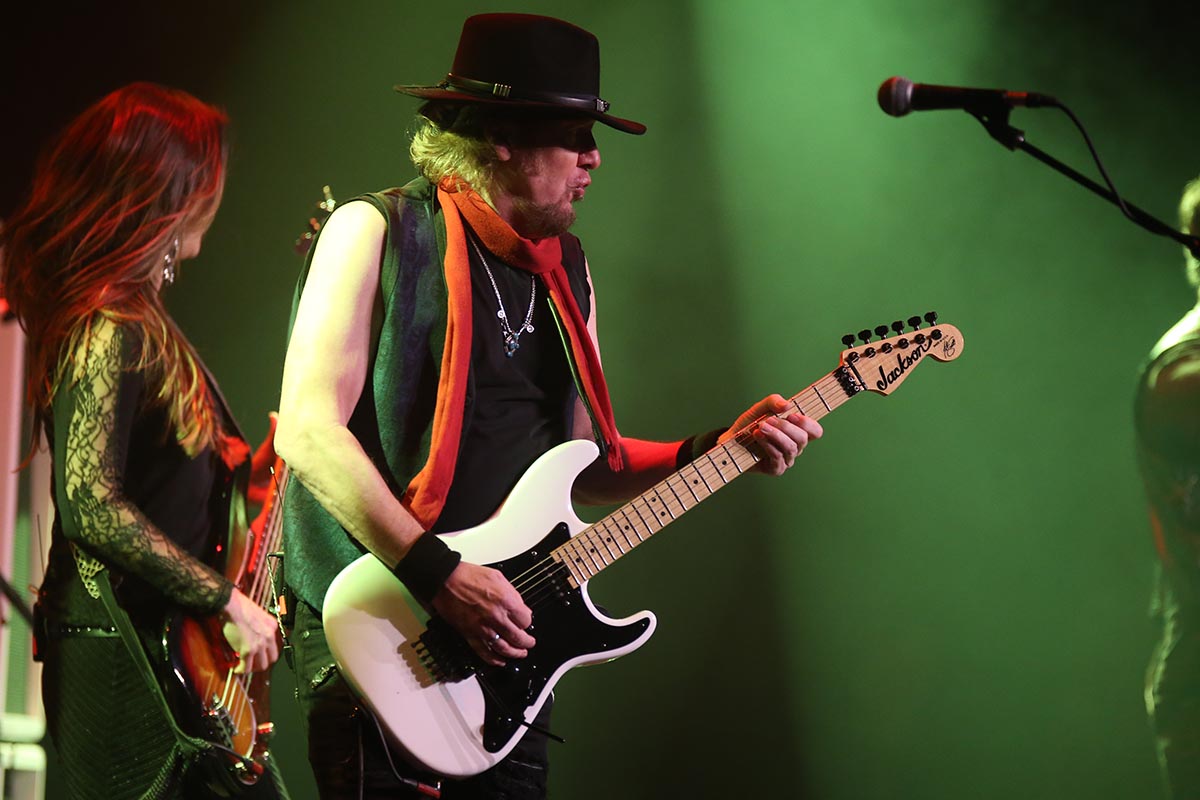 Whoa, I haven’t been up here at KK’s for a while, it looks like they’ve been busy of late changing the layout and building a bigger stage, it’s also feels a bit warmer ! So nice to immediately bump into friends as well, especially those who insist on buying me a drink, cheers x. I arrived pretty much on time but the first band were already on stage, although I only missed the intro. After finding my tog Andy to say hi, it was time to head near the front and check out the first support.

Buckets Rebel Heart – I wasn’t expecting this ! Dave ‘Bucket’ Colwell ( Bad Company, Humble Pie ) up on stage with vocalist Paul Manzi ( Cats in Space, Arena, Sweet ) and along side is Dave Boyce ( Quireboys, Heavy Pettin ) on bass, what a decent opener. BRH brought out an album in early 2019 called ’20 Good Summers’ and they start the proceedings with the title track. Smooth and succulent with a hooky chorus and Dave’s sublime guitar, this is so intoxicating. ‘The Bridge’ is a cool breeze and it’s soon apparent why Paul is up front, he’s got the presence and the voice to carry these stylish numbers. A new album is due out in the summer and ‘Chasing Satellites’ is the eponymous track, again it’s perfection and it’s evident the band are enjoying this as much as the Steel Mill audience. Actually I think this is the debut UK show for BRH ! Iron Maiden devotees will be familiar with ‘Reach Out’ which is up next, this was written by Dave back around 1986, but is probably better known as being the B side on ‘Wasted Years’. Adrian Smith sang lead vocals on ‘Reach Out’ and Bruce helped out on the BV’s. BRH end with the thumping ‘Whiskeyland’ again from the last album. The band’s lineup is completed with Leilah on backing harmonies, Paul ’Taff’ Edwards on drums and keyboard wizard Tony Moore. That was an excellent performance.

The Dust Coda  – One band that always depict a sense of confidence and boldness, The Dust Coda are now firmly rooted in the current NWOCR scene and have a list of upcoming gigs this year, as long as your arm. The London band led by John Drake on vocals and rhythm guitar kick off with ‘The More It Fades’ from their debut album. Twangy riffs, piles of undercutting and edgy chords, make this an outstanding number and the crowd are fully appreciating them from the start. The single ‘Let Me Go’ has a slight punkiness about it, with even tapping by drummer Scott Miller. As it rolls along it sinks more depth, with some lush guitar by Adam Mackie, adding more strident notes. The room is well packed now as John thanks the audience and the intro of ‘Breakdown’ is blasted out. A track from the new album ‘Mojo Skyline’ it has subtle vocals that penetrate with ease, a more defining number for sure and this is what l like about The Dust Coda. After the breathtaking ballad ’Sweet Love Is Gone’ there are two more from the Mojo Skyline album. ‘Best Believe It’ is a surge of rock and roll, energising and pumping throughout, Tony Ho on bass delivers and John’s vocals are screaming at us. ‘Limbo Man’ is a cruise of a track to finish with, so slinky and growling. Yet again, I’m loving this bands attitude, they never fail to produce a strong and worthy set.

Smith/ Kotzen  –  Have been favourites ever since I heard the Better Days EP. However, the Winery Dogs were my proper introduction to Richie Kotzen, (Poison,Mr Big ) when he teamed  up with Billy Sheehan and Mike Portnoy, now that was a stupendous band. As for Adrian Smith, well I guess he’s probably the quiet one in Iron Maiden, although as previously mentioned he has a great voice, as proved on ‘Reach Out’. Taking to the stage tonight at KK’s, there’s already an air of anticipation and as the lights dim, we all hustle to get a good view. Last years self titled album features heavily on the setlist and they approach it by beginning with the incredible ‘Taking My Chances’ sultry and with a heavily groove, it conjures up a view of the world full of despair. ‘Better Days’ continues with a more evocative theme and the pairing of Smith and Kotzen is immaculate. Julia Lage ( Vixen, Sister Knot) bass playing is impeccable and Bruno Valverde on drums is superb to watch. As they proceed with the rich and catchy ‘Some People’ it’s evident that these guys have a natural ability to gel. You can appear polished at any age, but I think it takes experience and acquiring that kind of sixth sense between each other, to play so eloquently at this level. ‘Glory Road’ and ’You Dont Know Me’ see some unbelievable guitar solo’s and yes Adrian is a natural on vocals. As the show carries on, there’s no let up, it’s unrelenting solidarity and as they mix up songs from the album and EP we just stand enthralled. ‘I Wanna Stay’ allows a drifting mellowness to hang and ‘Scars’ is a strong and poignant statement. A brace from Better Days, ‘Got A Hold On Me’ and the offbeat ‘Rise Again’ regain the pace and the main set ends on the reflections of ‘Solar Fire’. The encore consists of three numbers and ‘You Can’t Save Me’ is first, a Kotzen composition from 2006 that has stood the test of time. There’s an amount of nodding around the room as the familiar chords of ‘Wasted Years’ strike up and Adrian does it proud. Ending on the pounding and sleazy ‘Running’ to warm applause, there’s no doubt this will be one of the gigs of the year and not just for me.