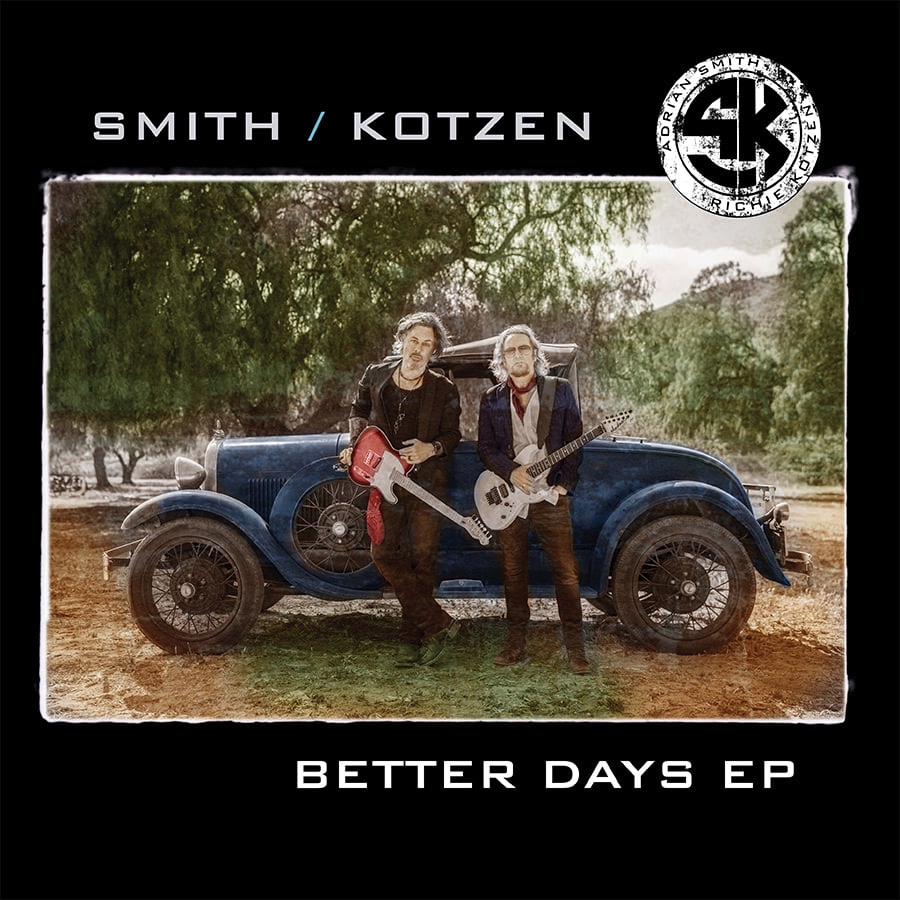 On paper this seems an unusual partnership, a guitarist from Iron Maiden and an Ex member of Poison and Mr Big. But when you have the versatility and ability to create sumptuous music, like Adrian Smith and Ritchie Kotzen can, then it’s a collaboration that works. This EP of four tracks carries on from where the debut album, that was released in March, left off.

The title track is first on the bill, ‘Better Days’ is a smooth, groove filled track. Stacks of harmonies and stretched vocals, are combined with a melody that meanders and glides. Naturally, guitar wizardry, is prominent across the divide and lingers until the end.

Richie Kotzen –  “When Adrian came over to LA earlier this year, we got together and started throwing ideas around and we very quickly came up with the new songs. ‘Better Days’ almost seemed to write itself. It’s got a nice groove to it. Adrian came in with the riff and we came up with a melody for the chorus together, pretty much working to the same formula we used when writing the S/K album, bouncing ideas off each other.”

The second song ‘Got A Hold On Me’ is more of a pile driver, as screaming and brandished guitar licks are thrown into the mix. Still having the dual vocals that define this band and a cosmic slice of drumming, it has an ‘electric shock’ feel about it. ‘Hate And Love’ heralds time to take a step back and delve into more subdued chords. Sultry and dark, it oozes a sense of seductive emotions. ’Rise Again’ features Richie’s bandmate from the Winery Dogs, Mike Portnoy ( Dream Theater,  Sons of Apollo ) on drums and the bass that’s incorporated, fits quite fluently, to give the track a lower and grittier edge. Shared, off beat lyrics are constant and you can tell the guys have put a load of effort into writing this one.

This is a short recording at only seventeen minute, but all four tracks are packed with several layers of sizeable material. Bought along with the album, this should be a worthy amount of Smith/Kotzen to keep your ears happy for ages.

‘Guitar wizardry, is prominent across the divide’

For more links to the EP and further info, see Richie Kotzen on FACEBOOK

As with the Smith/Kotzen album, the EP was produced by Richie and Adrian and mixed by Kevin Shirley. The final two songs on the EP were recorded at Windermere on Turks & Caicos Islands in March 2020. Better Days and Got A Hold On Me followed at The House recording studio in Los Angeles in April 2021 when Smith/Kotzen were finally able to reconvene after lockdown and to shoot an accompanying video for the title track.

The Better Days video was filmed at Mates studio in Los Angeles and was directed by Jeff Wolfe, who successfully combined an action career onscreen with an award-winning director’s role behind camera.