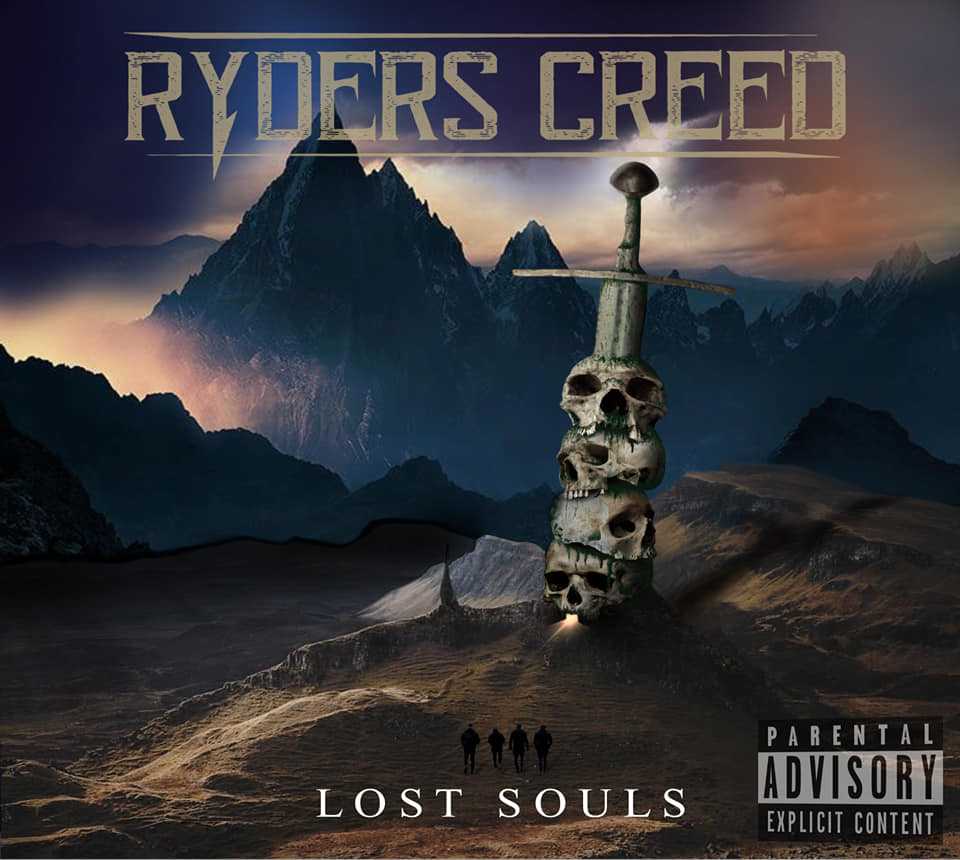 Caz Parker recently caught up with Ryan Antony of Ryders Creed on the eve of the release of their new album, to talk about the songs, the band and a bit of general silliness for good measure, check it out below!

To coincide with this Tina C. got her hands on the brand new album for REVIEW!!!

One positive thing about lockdown is having all this spare time to catch up on new music and make a concerted effort to support the bands that are losing their minds and their livelihood from not touring, by checking out and buying their music and merch in the meantime!!!

Today we are focusing on Midlands boys Ryders Creed and their brand new album ‘Lost Souls’, released 8th May on all major platforms.

I’ve seen the guys live in various settings over the years, the standouts being in 2018 at Hard Rock Hell, I was in the middle jumping up and down fist in air for ‘Raise The Hoof’ at midday with a banger of a hangover from the night before, nice one boys you’re better than Anadin at getting me moving! There was a nice acoustic interlude on the Eric Martin tour also in 2018 and then onto the heady heights of a sunny rammed Ramblin Man Rising Stage in 2019, working up a crowd that stretched as far as you could see around you, cementing their place amongst the top of the NWOCR boys.

You can really hear a change in the music on this new release I reckon, I guess that’s partly since they’ve parted with guitarist Lee Spencer and are now a four piece, and partly down to the natural maturing of their sound that’s happening right now before our very ears.

Opening with a very grown up ‘Memories’ verging on melancholy, then moving into the guitar driven ‘Unleashed’, the progression in style is more apparent than ever, they’ve thrown us a real curveball here and it’s clear this is going to be nothing like the album I thought I would be getting! Next up I love the solid opening riff of ‘Lost Soul’, title track and first single taken from the album, for some reason I’m drifting off into an Incubus type vibe, lovely!

An unexpected but nice little instrumental interlude follows in ‘New Beginnings’. We go gently into ‘Believer’, sat alone in my sunny garden in lockdown this song is almost like an out of body experience, very deep and meaningful and emotional, you guys!

Again I’m reminded of old favourites of mine Incubus on ‘Feel the Fear’, and I’m loving the infectious groove and attitude of ‘Chasing Dreams’ and the unexpected and almost dreamstate middle section. There’s a dark rawness throughout this whole album that I love.

A nice heavy chorus on ‘Meant To Be’ is just what’s needed to keep momentum going, then straight into the catchy guitar riff of ‘Cut Me Down’ the second single to be released from this album, this wouldn’t be out of place on any of the big boys post grunge albums.

‘Hand In Hand With The Devil’ grooves deep into your brain and I’m dancing some kind of stompy dance with arms wide, crouching and twirling around and then raising my arms to the sky, I think I’m tripping, very cool song!!!

Closing the album with a real rocker, the latest single ‘Money’, Ryan tells us “Plutomania: an unhealthy obsession with wealth and/or Money.” – Money. It turns the best of us into monsters and the worst of us into… well… Everybody wants it and when they’ve got it they want more of it. We spend our entire lives working for it. Some people are born with, some people achieve it and some have money thrust upon them. This is a song about money in a way that emphasises the obsession the human race has for it. We kill for it. We die for it. We f*ck for it.”

On that note get downloading and let’s send them our money today, we wouldn’t want them to have to start killing and dying for it now would we! We will overlook any f*cking for it, it is rock n’ roll after all!!!

Bouncing around under the NWOCR banner, but now with more apparent Pearl Jamisms and Incubusisms, we get trippy guitar driven brooding rock delivered with a raw edgy feel, this sophomore release is an important record in their career that will grow on you with every listen, and after I’ve had the chance to play this one to death all summer, I’ll then be very very interested to hear where they go next!!!

Download the album ‘Lost Souls’ on all major platforms at the link below : –

For more information check out :