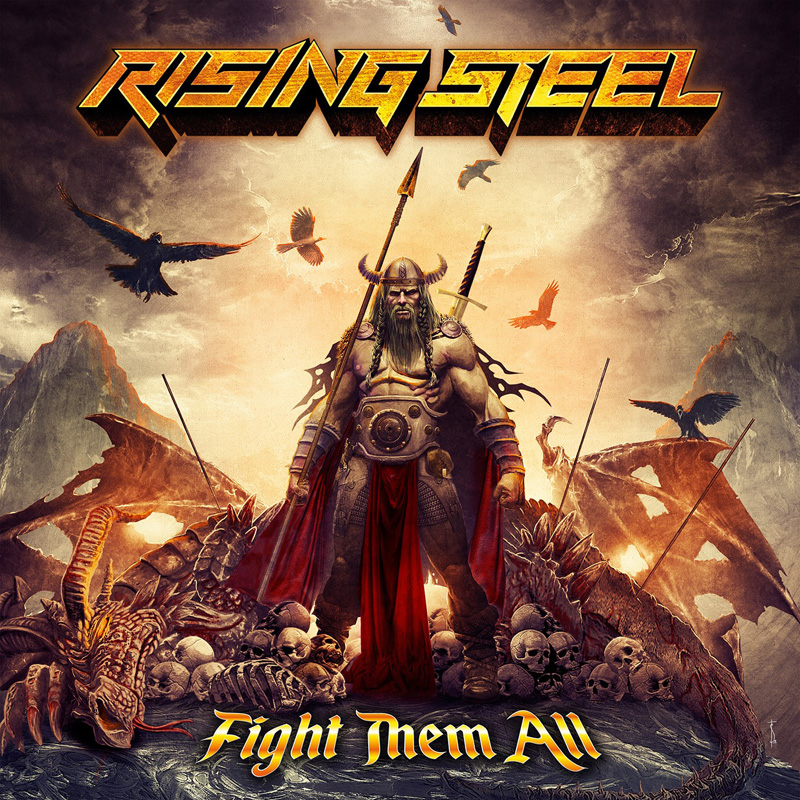 They say first impressions count, so when I looked at the art work for ‘Fight Them All’ I saw a layout that didn’t really look like anything from this century, it actually reminds me of several others, mainly from the 1980s. The band were formed in 20I2 although you would be forgiven from the image and name if you thought it was 1982. I was convinced Rising Steel were a band with  NWOBHM fixed firmly in their heads (albeit French heads), nothing wrong with that, but I didn’t expect any surprises. Nothing on this album was going to be any different from a dozen or so I have already heard. Yeah right, what do I know !

‘Mystic Voices’ crashes in like a bull in the proverbial china shop, a pulsating line of guitar shredding with a steady drum technique from Steel Zard and then the crushing power of the vocals. Slowly it all starts to cruise with a section of smooth and more dulcet tones. The eponymous track contains a sustainable riff, angry and controlled lyrics lie parallel to melodic hooks and it punches like a heavyweight with guitar brilliance. ’Steel Hammer’ enters the scene under more dark and sinister shadows. Very fluent guitar and distorted screams penetrate throughout, another embracing lick and then it dissolves into the mire.

One of the most creative tracks has to be ‘Blackheart’ all the sluggish behaviour of Sabbath and Metallica are taken to concoct and mould this beauty. Another with haunting and drama, it even goes out with an amazing and devilish riff. Most of these songs are over 5 minutes long and I do recommend headphones or the loudest of speakers to get the best effect. he switch from left to right is used emphatically and enhances the experience, travelling through your head in waves. ‘Gloomy World’ has an ominous intro, more thudding and heavy laden guitar strings follow, it indeed sculpts a masterful and gloomy outlook on todays world. ‘Malefice’ certainly does create a destructive force, Emmanuelson Ellipsis delivers harsh and quite punishing vocals, that go hand in hand with the low and precise fretwork from guitarists Tony Riffman and Mathias Quillard. It races along uncontrollably and hits the wall to finish abruptly.

‘Metal Nation’ teases with an evil laugh and gentle notes before heading into a blinding array of riffs and the crashing sound of Zards bass drum. Bassist Flo Dust also contributes heavily and the song flows combusting spontaneously, with more distortion and shrieking until the end. Just when you are feeling comfortable or rather more at ease, ‘Pussy’ turns the album on its head, this sleazier number is a stunner, there are echoes of Priest, Motorhead and Steelhouse, combined with all the pouting of LA glam shoved into this one track, love it. The brilliantly titled ’Led By Judas’ returns to the more hard core and heavy lifting gear. High vocals and a rapid pace give this song a more thrash edginess. ‘Master Control’ is a track worth the wait, the pressure that has been building is released and it has all the elements to provide a fitting finale.

After thinking this was going to be an album full of homage and the usual well trod format associated with a lot of thrash and metal that has gone before, I was gobsmacked after just the first track, yes the influences can be identified, but the sound is totally 21st century. The contrast from their profile to what the band actually produce is so misleading. Under the layers of camouflage is a band with new offerings for the table. I would advise an overhaul so more of the right audience are targeted and they gain the notice they deserve. This band are right up there with all the hard rock/thrash merchants of today so their persona deserves a bit of a makeover.

‘Fight Them All’ was mixed by Rickard Bengsston and Staffan Karlsson, the Swedes have worked with Arch Enemy, Spiritual Beggars and Grand Magnus among others. It was mastered in Finland by Mika Jussila using a 50 year old studio to create a complimentary sound. The album is available now, from Frontiers Music see the links below for options.