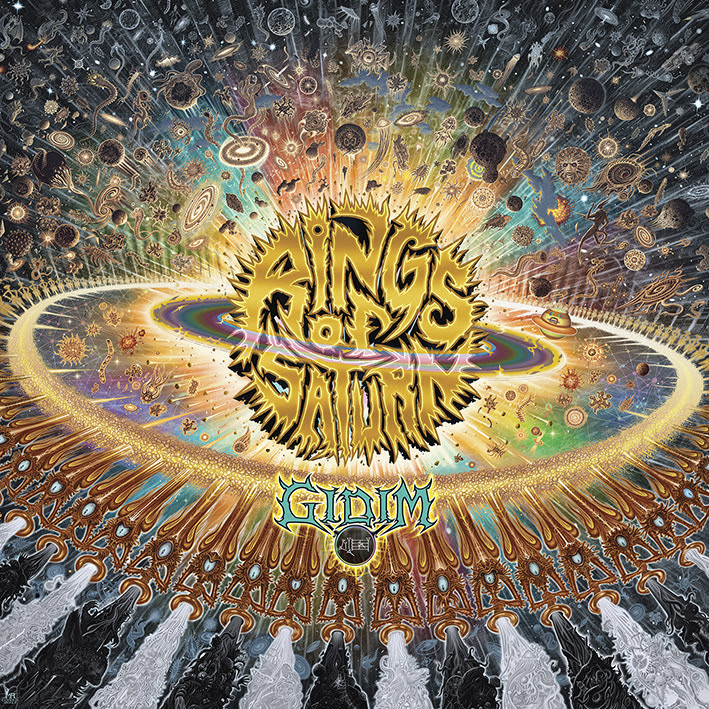 When it comes to reviewing an album or a band, it’s important to consider what similar bands at the time are doing. This helps to draw comparisons, allows you to talk more descriptively about the music it shows whether the music is as good as that which the scene is currently putting out…….. And then there’s Rings of Saturn. The closest you could realistically come to that kind of style would be bands like Enterprise Earth or Aversions Crown, but even then they still don’t possess the draw dropping solos and unusual yet brilliant tonalities that RoS possesses. As a result, this review is going to be the most difficult I have done to date as the only solid reference point I have is the band’s previous works. However, as a musician myself and a big fan of bands who push boundaries and do new and interesting things with music, I do greatly respect this band and therefore it only feels necessary to give a fair review to the best of my ability.

One of the first, most obvious positive features of the album (and indeed the band) is the amazing musicianship present. The guitars often include fast ascending scalic licks, blisteringly fast tremolo picking and unbelievable solos, whilst the drums take typical death metal drums to the extreme, often blast beating at unbelievable speeds, and the vocals are brutal yet precise, often switching seamlessly between shrieking highs and brutal lows. Whilst these levels of musicianship can lead to some problems (which I’ll discuss later on), it is refreshing to be able to see a band with undeniably amazing skills. One of the many typical downsides to this level of musicianship is that often in extreme metal albums there tends to be too much going on with little flow or meaning, and thus the talent is wasted due to the listener being completely blasted with sound. Thankfully however this isn’t all that much of a problem here. In songs like ‘The Husk’, the band integrate some shredding into one of the main riffs of the song, thus the actual riff feels far more complete and intense as a result. The song does have typical Rings of Saturn atonal solo shredding sections, but it feels more appropriate coming from the previous section, thus creating an overall balanced sounding song.

As well as the actual musicianship, the album’s structure also seems to be rather well done for the most part and it manages to maintain your attention all the way through. It opens with ‘Pustules (Ft. Charles Caswell of Berried Alive)’, a brutal, low tuned guitar section with stupidly fast blast beats, instantly grabbing your attention. It then keeps the brutality and speed going with the second track ‘Divine Authority’, setting a heavy, fast tone for the album. It then gradually goes into calmer territories with songs like ‘Mental Prolapse’ and ‘Gidim’ taking a somewhat softer direction, which balances against the heavier, faster side of the album. In general, the songs here seem more varied and interesting than some of their previous works. Songs like ‘Tormented Consciousness (Ft. Yo Onityan)’ are good examples of this which starts with a very cool sounding 8-bit guitar melody at the start before moving into the more familiar speedy atonal guitar solos that are so typical of the band’s sound. ‘Mental Prolapse’ is possibly the biggest highlight of the album, with a modern metalcore inspired introduction, moving then into typical a typical RoS shredding section, and then going into a much more death metal-inspired brutal section. Yet somewhat surprisingly, the song flows rather well, moving cleverly from one section to another, and portraying each style well in their respective sections. The album even manages to create a certain amount of ambience, with songs like ‘Genetic Inheritance’ managing to blend the band’s typical insanity with the synth to give a creepy, ominous atmosphere that lasts for most of the song. It’s something very rare coming out of an RoS album, but it is pleasant to see that the band are capable of blending styles, even if I personally would have preferred it if they took this approach a little more here!

Whilst the songwriting does indeed have its merits, it isn’t all without fault. Although I did state before that the high levels of musicianship helped most of the songs, some tracks are guilty of doing too much without really going anywhere. The track ‘Face of the Wormhole’ for example, is an example of a song where nothing comes together all that well, and what we end up getting is a blast of impressive guitar and drum work, but no real sense of movement. The song’s structure seems less fluid and more static; thus it loses a lot of the impact that it could have had. Possibly the biggest disappointment is ‘Gidim’, the album’s instrumental track. It appears that the band were going in a more experimental, progressive direction here. Some of the unorthodox elements are interesting, such as the eerie acoustic guitar (most predominantly heard at the start of the song) and the bi-tonal melodies heard several times throughout the piece, giving it an unnerving feel. Unfortunately, these elements feel as though they’re trying to mask the actual nature of the song which is, quite frankly, an over-extended guitar solo. Now, of course, part of any good RoS song is going to be a demonstration of intense musical skill, there’s no doubt about that. However, the problem with the song here is that, whilst each instrument has a very technical and impressive part, these parts aren’t particularly interesting, they don’t go particularly well together, and they don’t flow too well either. This is especially disappointing as the band is very capable of creating an incredible instrumental track. ‘The Macrocosm’ from the band’s 2017 album Ultu Ulla is a prime example of this, with a repeated refrain, flowing melodic lines, genuine atmosphere, and the sense that you’re being taken on a journey whilst still demonstrating the technical skill of the band. ‘Gidim’, on the other hand, feels like it’s trying to force atmosphere on you, rather than providing a genuine, authentic experience and sugar-coating it with fast guitar solos.

Although these problems do hurt the album in my eyes, they are only opinions. Some fans like the extremeness of RoS and would prefer an extended, shredding fast guitar solo over a more atmospheric instrumental. The one major problem that basically all fans will get aggravated by on the album is poor production. The heavier, lower sections of songs aren’t well defined or pronounced, which leads to a very mushy, low-impact guitar sound. It’s especially bad as many songs have extended chug sections (often with shredding over the top) and thus the poor quality actually damages the heaviness these sections are trying to convey. As well as this, the drums feel rather underdone, particularly the snare, which gets lost quite often in songs, which again drastically damages the impact some of the heavier songs have. It’s unusual for a band like Rings of Saturn, who are so invested in the technical side of music, to have this problem and it makes it all the more disappointing for those who have grown accustomed to the good production of their previous works.

At the end of the day, something to bear in mind is, it’s Rings of Saturn. They obviously don’t take themselves too seriously and they’re so unique that they’ve gained a fan base that thoroughly appreciates their music and indeed their beautiful memey image. Because of this, most of the issues I have with Gidim can easily be overlooked. However, production qualities are something that albums need to have in order to stand any chance of being remembered and as this album doesn’t particularly have any great production, I have to question how memorable it will be and how many new fans it will drag in. Existing fans will most likely be more than satisfied with the album. The band take some new directions here whilst not making it sound completely unfamiliar, and for that reason alone it’s definitely worth a listen if you are mildly interested in the band. If, however, you are looking for something with a little more atmosphere, this album probably won’t be ideal for you. There are, nevertheless, many other albums by the band that you can get this from, so don’t be deterred from checking them out, especially if you are into high levels of musical skill on metal albums.