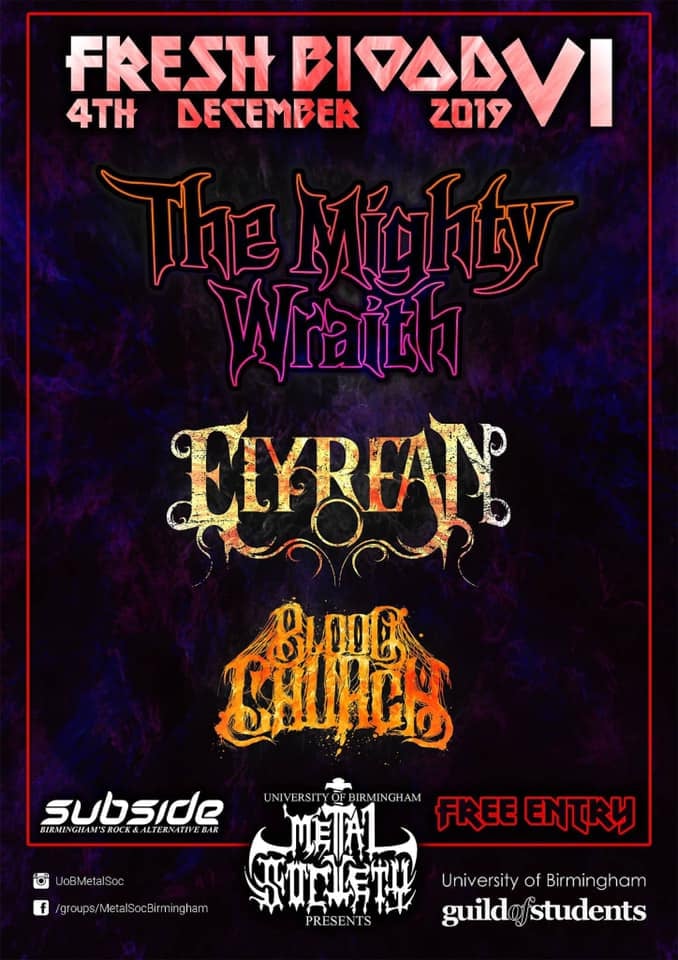 The University of Birmingham’s metal society always does a fantastic in welcoming new members and old members into the year with their annual gig ‘Fresh Blood’. The event always manages to draw together some of the best talent of the midlands together for one night of madness and this year, for the sixth rendition of the event, the bands on offer were Telford based Blood Church, Cannock based thrashers Elyrean, and Birmingham’s own The Mighty Wraith, who sadly had to pull out due to injuries sustained by the guitarist. Nevertheless, the event carried on with the other two acts playing and the crowd were still delighted to show up to support these two local bands.

Blood Church were the band first to grace the stage, perfectly executing their entrance with corpse paint and a ritualistic reading of a devilish looking book, setting expectations through the roof and preparing us for a night of intensity. One of the ways in which the band manages to instantly stand out is through their stage presence. This is often an aspect of live performance that a lot of local bands struggle with and it leads to a much impactful show. However, Blood Church thankfully do not fall victim to this, the extreme confidence in both their playing and demeanour coupled with the black-metal-esque set up allowed for a very intimidating and intense atmosphere, by only doing little more than playing confidently. The way the band utilised black metal traits within their act subverted my expectations a little as well as, whilst there were indeed black metal elements present in their music, it actually sounded closer to that of death or doom, with even some elements of deathcore splashed in there as well. Although the quality of playing, stage presence and overall performance were good themselves, the band managed to create an extremely immersive effect with their setlist construction. The most prime example of this is the opening, where the band starts with a very slow, atmospheric intro song, into a much heavier, breakdown filled song, often juxtaposing low n’ slow breakdowns, with higher guitars and shriekingly high black metal-style vocals. Another good example of this was the second to last song ‘Thou shalt not silence’ which was a long, progressive song with several tempo and metre changes, all of which was together and in time, and had the general effect of feeling as though you were on a journey, a nice touch for the closing of the set. I also particularly enjoyed their cover of Sepultura’s ‘Roots’, keeping it just as primal and raw as the original set out to do, but adding some nice Djenty features and some especially welcome black metal vocals over the top. Overall a great opening act, with an impressive stage presence, great coordination, and a well-crafted set, perfectly setting everyone up for the rest of the night.

On next was Cannock based thrashers Elyrean, who spared no expenses in giving us a fast-paced, blood-pumping thrash set. Although this was a big change in sound from the slower, more atmospheric blackened death/doom sound of Blood Church, the change in style was actually very welcome and made for a much more interesting line up overall. The band started off with a fast-paced opening song, displaying great musicianship with the guitar solos being clear, and the drums being very controlled and well-timed. I also particularly enjoyed the interaction between the musicians, you could clearly tell they were in their element playing with each other and that showed especially in their stage presence. The band played as though they had practised the set a thousand times, completely relaxed, constantly back and forth at each other and very in time, overall giving the sense of good chemistry within. That being said, although the band was relaxed, do not misinterpret as to meaning they weren’t technically proficient, as this is most certainly not the case. All of the songs played demonstrate this, I particularly enjoyed ‘Blacken the Sun’ and ‘Distorted Reality’, however their second to last song really showed how technically capable they are, with blisteringly fast guitars and both fast AND technical drums almost the entirety of the song, all whilst being very together. This is made an even more remarkable feature of their performance when factoring in the fact that this was around 50 minutes into their set, meaning that they would no doubt have been very tired, and so to pull off such a technical song that late in their set is very impressive and truly shows the bands endurance and stamina. They also managed to do a good job interacting with the audience, having some good stage banter in between songs and engaging with the audience during songs just enough to keep it from feeling slightly overdone. That being said, the response from the crowd was very strange, with several members of the audience forming hugging circles, ballroom dancing and slaving which was…. confusing. Given that the band were only supposed to be a supporting act, they managed to do a very god in taking on the role of headlining band and managed to play a very fast and technical set to near perfection.

Although The Mighty Wraith were missed on the evening, the event didn’t suffer significantly because of their absence, with both bands delivering on giving diverse, engaging sets and showing some of the best of the midlands local talent.