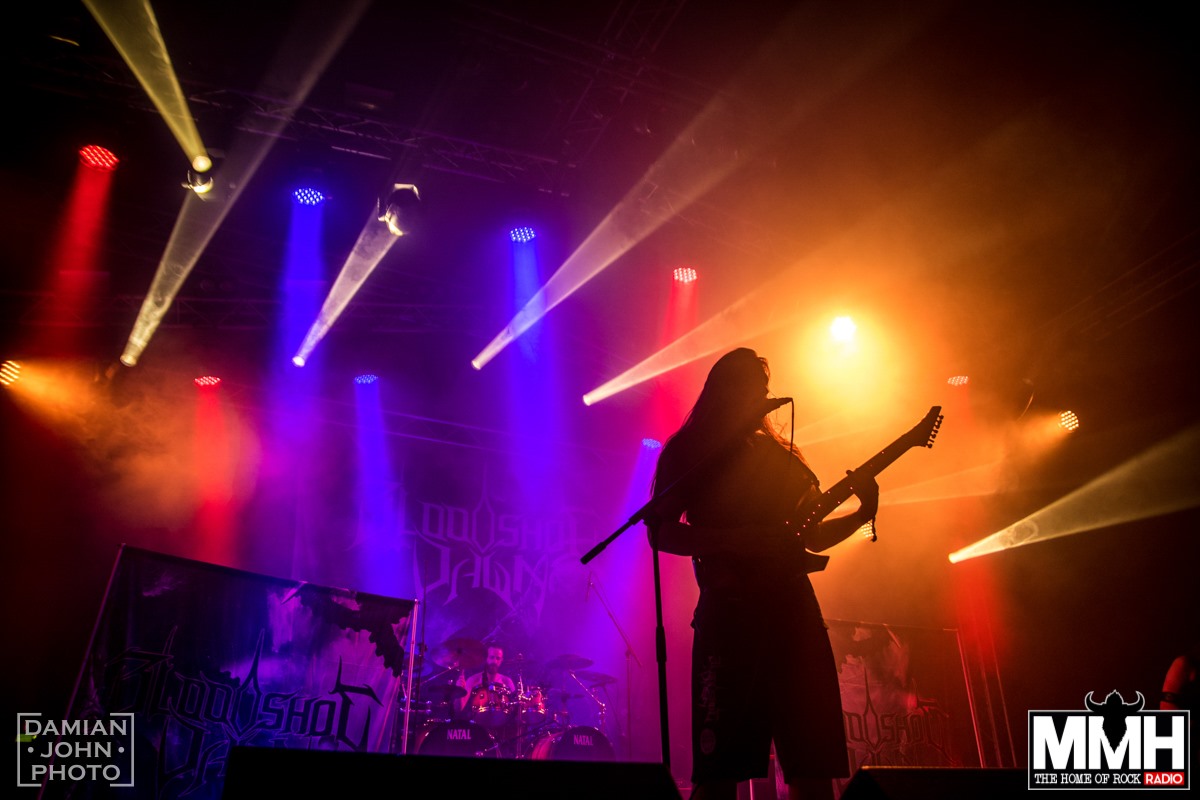 You have to thoroughly admire a band who has gained notoriety due to nothing but their pure talent. It usually takes some kind of viral video or strong base following to take a band to any kind of sustainable level. Bloodshot Dawn is one such example of this kind of band, where their success at Bloodstocks Metal 2 the Masses competition managed to kickstart their career and have since played at festivals such as Bloodstock, Hammerfest and Tech-Fest. How fitting then that they would be playing at a venue in Birmingham, home of so many huge bands who also largely got where they are due to their talent.

Ontario based Becomes Astral was the first band to play and what a set they performed. Starting off proudly stating their Canadian heritage with a South Park intro before blasting into their 3 song set. Given that they’re the opening act to a melodic death metal band, the blend of progressive and death nicely sets you up to the rest of lineup. The band starkly reminded me of Between the Buried and Me, and they had similar levels of tightness and stage presence to accompany their sound. Their set consisted of three songs, the latter of which being a 10+ minute long epic ‘Praise the Sun’ which included several style and tempo changes. Overall a great way to start off the evening.

The second band to grace the stage Infected Dead got straight to business, hard, fast death metal with a strong melodic focus. I particularly enjoyed the bass-work, which utilised both slapping and fast finger technique and even soloing from time to time. The drumming on the other, whilst still mostly okay, felt a tiny step away from going wrong the entire set. The set itself seemed well constructed with a slower, longer yet still interesting opening song before moving into a full throttle, fast, death metal song, and then later on finishing with a true headbanger. Although the band’s stage presence initially wasn’t particularly impressive, as the set went on they eased more into the performance and, especially considering that the band suffered from technical issues the entirety of the set, they were also a great act to watch.

Finally came the monster Bloodshot Dawn and, even before the band started the set, it was clear from the soundcheck that something special was incoming. The band open with ‘Smoke and Mirrors’ the tightness, technical skill and clarity were all undeniably on another level than the opener, spectacularly followed by the more melodic focused ‘Survival Evolved’. Whilst the playing and song choices were impressive, surprisingly, the stage presence wasn’t. Often it felt as though the band were playing the songs as they would in any other normal practice session which significantly decreased the engagement between band and audience and as a result, the set felt somewhat boring to listen to. That is, until around about halfway through where ‘Shackles’ where the band felt far more energetic and powerful, and they manage to keep up this energy with two heavy hitters: ‘Quantum Apocalypse’ and ‘Blackhole Infinity’. Even with the extra energy given, it still felt as though the band was playing AT the audience, rather than WITH the audience, often playing songs without looking out the audience and standing relatively still, and then expecting them to make a lot of noise at the end. To be fair to the band, the lead singer/guitarist did have an injury, so it’s understandable that there is a small degradation in live energy, however, I did feel that the general performance could have been very easily elevated with such simple things as members of the band moving more and looking at the crowd more. The set finale was very well constructed, the second to last song sounded similar to the final track of an album, giving an immersive, journey-like feel, before finishing off the night with their most popular track vision, which had some very pleasant bass and drum work added to the core of the song.

Overall a great night, all bands impressed me in a different way and in general and although I certainly could have made some improvements to the night, I’m more than happy to support a band that does wonders for the scene as Bloodshot Dawn does.