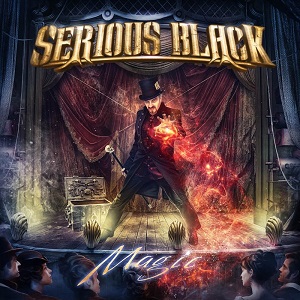 Serious Black mean serious business. The German power metal group have had a productive start to life since their formation in 2014, with the release of debut As Daylight Breaks in 2015 followed by sophomore effort Mirrorworld in 2016. 11 months later and we’re on the eve of their third record Magic, an album that explores all sorts of interpretations and connotations of the titular term.

I admit that I approached this album with a sense of trepidation for a number of reasons. First of all, for all the talent involved in the group, Serious Black has never really delivered in the past, with their previous two albums textbook exercises in banality. Secondly, this 14 track album runs for about an hour or so, which is 20-25 minutes longer than its predecessors. Finally, as previously mentioned, this is their third album in as many years, and is actually arriving less than a year after previous effort Mirrorworld. Composing a longer, more ambitious album not long after that rather insipid 35 minute affair and coming up trumps would take a mammoth effort. However, due to the aforementioned talent of the band, I’m always willing to give them another chance, as I know that they’ve surely got a great record in them somewhere. Unfortunately, it seems my initial reservations were spot on, as Magic is another notch on Serious Black’s belt of disappointment.

I think the worst part about Magic, and Serious Black as a whole, is just how damn ordinary everything is. There’s very little imagination and flair, and much of the album just sounds so lethargic, as if the performers are just doing the bare minimum to get this thing recorded and out on to the shelves. The extra ordinarily gifted urban breed’s vocals are bereft of any real conviction for long stretches, with only a few moments here or there sounding like he’s singing with interest. It’s a far cry from the sort of commanding presence he imparted on the likes of Bloodbound’s “Nosferatu”, that’s for sure. The music is mostly stock, generic power metal, with riffs and melodies that are a dime a dozen in the scene. Even the production lacks any punch or bite, and it’s like the whole record has been deliberately left in second gear as it ambles by.

I think it would be a disservice to Magic to say it is completely devoid of any sort of quality though, as there are a few songs that are quite good. The keyboard melody of “Lone Gunman Rule” admirably leads the way and there’s an unusually sublime vocal hook from breed in the chorus. “Now You’ll Never Know” has a more hard rockin’, almost AOR feel, with the subdued approach actually working in the song’s favour as breed’s passion spills out in the refrain. This song has had me consistently questioning whether I’ve just been reading Serious Black wrong after all this time; after all, power metal does not have to be double bass and grand vocal choirs wrapped in glorious harmonies all the time. I think it’s more a case of this being a great song, however. “The Witch of Caldwell Tower” and “Newfound Freedom” do fall within that particular stereotypical power template however, and although they’re nothing special, the added urgency injects a bit of excitement to proceedings that is sorely lacking.

So, third record, and third time Serious Black have missed the mark. I’m not sure how a gifted group of individuals can keep getting it wrong, but there’s no indication that things will take any up turn any time soon. Magic may be the theme that runs through the album, but musically, it is anything but. Sadly, another one to avoid from this band.