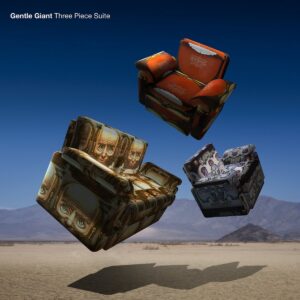 Back in the golden age of Prog, the 70s, when Prog bands could sell out stadiums, put on an elaborate and maybe over the top stage show and command their own  individual haulage trucks (c’mon, you know who you are !!),  a time when you didn’t have to ask for the brand new album by your favourite band in whispers and the LP was the ONLY medium to listen to and appreciate, alongside the mammoths of Progressive Rock (Yes, Genesis, ELP) one band stood proud – Gentle Giant.

The music was complex, intricate and timeless.

Although not commercial, the early albums have been SO influential to so many bands and artists – Haken, Syzygy, Spock’s Beard are three modern Prog bands that immediately spring to mind. Toward the end of their short lived career, the band changed tack to maybe try and achieve commercial recognition – “The Missing Piece” onwards marked a different direction for the band and by the time “Civilian” was released,  I think the writing was on the wall….

The band existed for ten years (1970 to 1980) and by the time they called it a day, the reasons for disbanding have been numerous – lack of direction, personal issues,  lack of commercial success and so on. I must admit, I was VERY fortunate enough to see the band when they came to Birmingham (and still have the ticket stub to prove it !!) and what a show it was – they even had quadraphonic sound, so to say there were ahead of their time is somewhat of an understatement !!!

Over the years, the band has deservedly earned cult status and like most bands and artists who either split or pass away, I truly believe their genius has lived on to inspire and influence SO many people – If you have never checked this band out (how can you call yourself a Prog fan ??), this new release is probably a very good place to start. If you already have EVERY GG album/single/8-track/cassette then you STILL need to buy this, let me tell you why…..

Available in various formats (the version I had is a 2-disc set which includes an audio cd and blu-ray data disc, but please take into account you will need a suitable device to listen to the latter – blu-ray player, PS3, PS4, Xbox One etc) this collection of their first three albums sounds as fresh and relevant TODAY as it did 40-odd years ago !! The audio CD comprises an 11-track collection of tracks garnered from the legendary first three albums (Gentle Giant, Acquiring The Taste & Three Friends) PLUS a previously unreleased commercial track – Freedom’s Child (a single-length track written by Kerry Minnear prior to joining the band) and a 7″ edit of Nothing at All. All the tracks have been re-mastered by our old friend Steven Wilson (who seems to be on a one-man mission to re-master EVERY Prog album from the 70s, having already re-mastered Octopus and The Power And The Glory !!!). As for the Blu-Ray, you get all three albums in their entirety (not re-mastered, but in their original mix), the ten tracks on the CD plus instrumental versions of all ten tracks, housed in superb packaging with a comprehensive booklet with insights into the band’s history from producer Tony Visconti, Steven Wilson and Anil Pasad (plus band members)

How does one describe Gentle Giant’s music ??? Take Jazz, Blues, Classical, Chamber Music, Baroque, Medieval and Rock, throw it all into the mix and see what comes out !!!! All the band were multi instrumentalists (violin, trumpet, xylophone, cello alongside the regular instruments) and used every resource at their disposable to achieve what would become their own distinctive style. Unfortunately, due to the music’s lack of commerciality, they never really hit the “big time” and so, despite veering off into “classic rock band” territory with their latter albums it’s only been the passing of time that has truly highlighted what a totally original, innovative and influential band they were….

If you’re looking for your next purchase, you won’t go far wrong by investing in “Three Piece Suite, whichever version you opt for (although the cd/blu-ray collection is by FAR the most desirable !!)