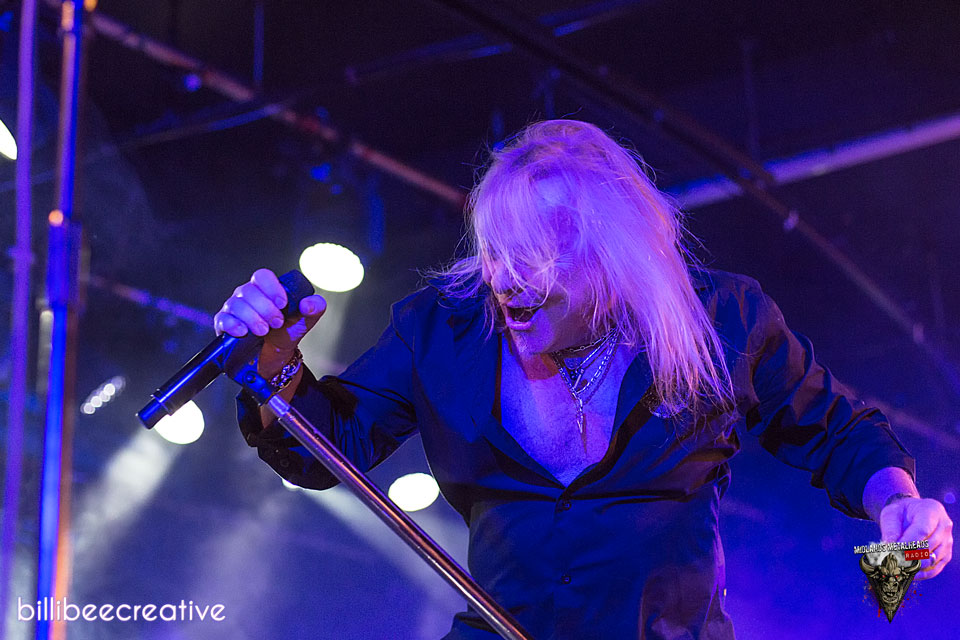 Who would have thought……Butlins and Rock Music !!!

Put aside any preconceptions folks, having run themed Live Music weekends (60s, 70s, 80s etc) for a while now, as we seem to be riding the retro wave at this moment in time with more bands reforming and coming out of the woodwork than ever before, why not jump on the band wagon and give the fans what they want ???

Now in its 4th year, it was the first time this reviewer had attended and what can I say, bring on 2019 !!! Allow me to explain……

Festivals have been around for a while and I daresay more than a few of you have experienced “Drownload” or Glasto, but the tide is turning (mid field probably !!) and with the glorious variety of weather we experience in the UK, it was inevitable somebody would hit on the idea of taking the festival experience indoors but not only that, take it to the next level by offering first class quality accommodation, loads of merch, cd’s and clothing to buy and a wide selection of food and drink – this is festival-going in style guys!!!

HRH have been doing this for a fair few years now with HRH Blues, HRH Prog, HRH Doom vs Stoner and so on, so along comes Butlins and with three sites still running and very active, why not make the most of them during the Winter months, which has always been a non-productive time of year.

With 41 acts on offer on three stages (Centre, Reds and Jaks) over three days, quality accommodation, access to all the facilities (including the awesome Splash World) for virtually the same price (if not LESS) you’d pay to see ONE top band for 3 hours, where’s the argument ?? (I’d recently seen U2 tickets changing hands for over £400 each !!)

Among the bands on offer – Uriah Heep, Hawkwind, Magnum, Big Country, Slade, Nazareth, FM, Manfred Mann’s Earthband, Larry Carlton, Stray plus we even had some tribute acts performing: Limehouse Lizzy, Snakecharmer (although they do have their own material too), Bon Performs AC/DC Powerage and so on and so on, certainly no shortage of class acts. On top of that – an entire stage devoted to up and coming acts such as: Hell’s Gazelles, Piston, Kikamora, Scarlet Castles, Tear It Down and Anonymous (who were one of the highlights to be honest, just a shame there was a massive queue for Big Country so the attendance was poor !!). What’s nice, in the “Introducing” stage, you had the chance to vote for your favourite act. The one who gets the most votes gets to open on the main stage the following year and this time around, we had Welcome Back Delta and Killit who had obviously wowed the crowds last year.

One thing I’ve ALWAYS enjoyed at festivals is coming across an act you’ve not seen or heard before and they TOTALLY blow you away to the point where you go  – “Where have you been all my life ??” On the main stage I experienced this twice with THE BREW and CHANTEL McGREGOR. Before GOR, never heard of them, but WOW, did they blow the shit out of the centre stage or what ???? Needless to say, there was a substantial queue for merch after both sets…

With 4,000 fans spread over three stages, at times it was difficult to get in to see one particular band – for example, when Uriah Heep hit the stage, it was standing room only with the room packed to capacity and a huge queue of people outside waiting to get in, it was very much a case of one out, one in. This was much the situation on more than one occasion over the three day event – unavoidable really, so you need to plan your day carefully as the inevitable overlap occurs.

With 80s bands reforming and making more money than they ever did back in the day when they first hit the scene and a raft of fans hungry for the classics, who can blame bands like Slade (with only two original members), Uriah Heep (only one original member), Hawkwind (one original member) from riding the wave and rocking well into their 60’s and 70’s, hats off to ya guys.

Heep as I was stuck in Bobby Kimball’s changing room for over an hour doing an interview, but speaking to Bernie Shaw the following morning, apparently they went down a storm with the best set they’d done for a while – bummer I missed it, but hey, the price you pay eh ??)  On the downside, there were a few disappointments, but we won’t go there….LOL

This music is timeless and needs to be preserved, relived and revitalised, not just for long-time fans, but for generations to come so why not ride the wave of nostalgia, relive your youth and just let your hair down (what’s left of it !). There was a lovely vibe during our stay and it was nice, a chance to wind down, chill out, wear what the hell you want and check out some amazing bands and tunes – what a way to spend a weekend, look forward to seeing you all at GOR 2019 where we already have Skid Row, Atomic Rooster, Brian Downey’s Alive And Dangerous and Chris Slade lined up ready to rock.

Click here to book your tickets for next year’s event – https://www.bigweekends.com/your-break/190464

The Progmeister (on behalf of Midlands Metalheads Radio)