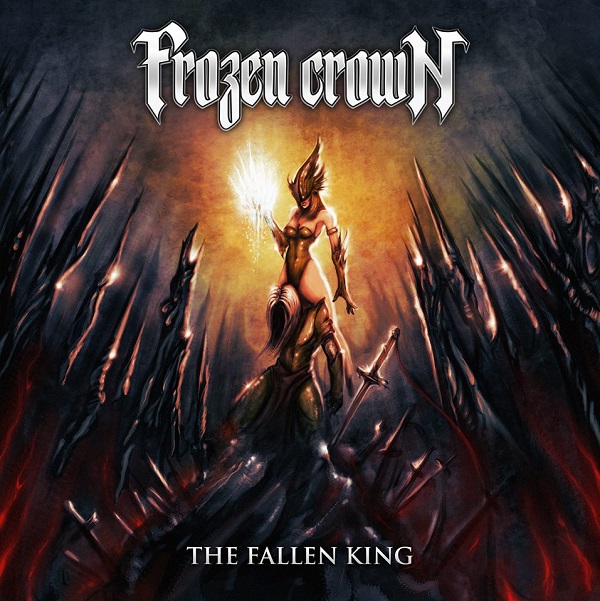 Power metal newcomers Frozen Crown boast an array of talent in their ranks, with the project showing plenty of promise on paper as the Italian group gear up to issue their debut album. A fairly traditional take on the genre, The Fallen King also promises nods to folk and melodic death metal, making it a slightly more intriguing prospect. Putting that into practice is of course the tough part, and whilst the album is a serviceable addition to the power metal canon, it likely won’t see the band making waves any time soon.

Frozen Crown predominantly play the European power metal style, and work their way through the entire spectrum of the sub genre before The Fallen King‘s time is through. Keyboards and guitar melodies rule the roost, with riffing coming across as a mere after thought; a sentiment only strengthened by the feeble guitar tone. The leads, on the other hand, are a thing of beauty; the clean, vibrant tone accentuating Federico Mondelli and Talia Bellazecca’s playing wonderfully and making the music very easy on the ear. Vocals are locked in front and centre, with Giada Etro and Mondelli given ample time to sing their hearts out. They can carry the tunes well enough, but there is a distinct lack of range and (especially) power, which doesn’t help when the riffs are already robbed of any bite thanks to the production job.

Frozen Crown establish a pattern early on of alternating between your standard, double bass driven power tracks and ones that don’t fit that particular mould, only breaking free from this rigid structure as the album nears its end. This helps to give the album a sense of dynamism, as the constant changes to tempos and moods starve off any semblance of staleness that the genre is prone to. Of the bread and butter power metal songs, early album highlights “Kings” and “The Shieldmaiden” are the choice cuts (the latter’s dreamy melodies are particularly fantastic), exhibiting all the qualities fans of the genre love. There are some insipid harsh vocals dotted sparsely throughout the record, and, save for the folk metal inspired closer “Netherstorm”, they don’t really feel necessary and prove more of an ill fitting distraction than a natural part of the songs. “Netherstorm” almost sounds like the work of another band, leaning more towards the sort of sound Norther or Ensiferum may go for.

When not playing up to the speedy Euro power metal tropes, Frozen Crown keep things interesting by trying their hand at a few different approaches. “To Infinity”, with its straightforward, poppy sensibilities, is the most accessible thing here, whilst “I Am the Tyrant” opts for an atmospheric, mid tempo chug. “Chasing Light” is the token ballad and, more than any other song here, exposes the vocal limitations on display. It is easily the weakest track on the album, with one listen more than enough to last a lifetime. “Queen of Blades”‘s effortless tempo changes are a nice touch, and the bridge is the only time on the album the weight of the riffs have any impact, but the song itself never reaches its potential.

There is a lot to like about The Fallen King. The music is generally pretty good (and at times great), but the whole thing is dragged into the mire of mediocrity by the lacklustre singing and vocal hooks that lack imagination. The overriding thought as I listen to the record is how much it could be improved if the vocals were stronger. There’s a chance Etro and Mondelli may grow into the role with future releases, but I can’t shake the feeling that a change in line up would be the more practical option (relatively speaking). As is, there’s better alternatives in the genre, but I hesitate to fully write them off until they’ve a few more years under their belt.

The Fallen King is available worldwide on February 9th via Scarlet Records, and can be purchased here.