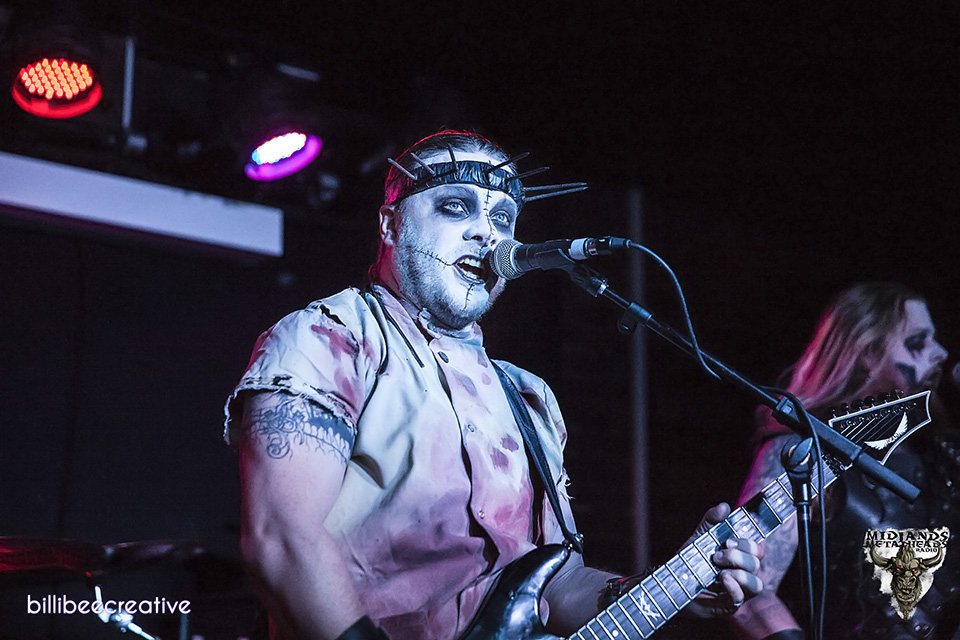 Nottingham’s very own kings of heavy metal Evil Scarecrow are fast becoming THE live act to be a must see for a rapidly growing army of fans across the country. Their “Boldly Going Anywhere” tour has been a resounding success with sell-outs along the way. Tonight it was Wolverhampton’s Slade Rooms to be hosts on the penultimate leg of the tour, with just their home town gig at Rock City to follow.

To get the crowd nicely warmed up the Scarecrows had special guests, metal merchants Decimate and Slaughter Horse.

Opening the evening was Birmingham based Decimate, five guys who take great delight in living up to their name, musically, that is. Exponents of metalcore, thrash and death, we were treated to a set of six tracks taken from and showcasing their soon to be released album “Destroy or Be Destroyed”. Judging by the crowd reaction tonight to an explosive performance, uncompromising, with no-holds barred and full-bodied in its delivery, the album should move very well indeed. One for metal fans to keep at least one eye on.

Second guest appearance was by local Black Country outfit Slaughter Horse, whose mantra is “Metal from the Black Country. Nothing else.” This was a band new to me, as indeed was Decimate, and with striking face artwork in bright orange and green, they are hard to ignore and from what I hear have been upping their game gig by gig by gig. Tonight they delivered a meaty six-song set full of chunky guitar riffs and some fine stick work, something that always impresses me in this genre of music. Whilst I thought the crowd were a little slow to warm to Slaughter Horse, by mid set they had been pretty well won over. I particularly enjoyed “Damned If You Do” where I thought Craig Keating’s guitar work really shone! These guys were the perfect halfway-house between the raw, hard core Decimate and the more melodious, fun loving Evil Scarecrow.

A short break followed in which people caught their breath and recharged glasses as there wouldn’t be much opportunity once the Scarecrows took to the stage. The anticipation was intense with even a glimpse, stage-side, of a band member, raising an acknowledging cheer. I’m used to seeing Evil Scarecrow make a rather dramatic entrance, but tonight was fairly casual, by their standards. It mattered not to the almost full Slade Rooms – it was time for madness and mayhem to ensue. You could be forgiven that, perhaps the silliness, daft stories and odd bits of pantomime are a bit of a smokescreen. Make no mistake, this is a band of excellent musicians, who play exceptionally well crafted songs and are committed to giving their audiences the ultimate in musical experiences. At Download in 2015, Evil Scarecrow was probably one of the bands of the festival in my opinion, so it’s no surprise to me that this current tour has been so well received. This band seems to have cornered the market in crowd participation. Pretty well right from the off, fist-pumping and chanting is encouraged. But then we get to the serious stuff. All hail Robototron! Nearly three hundred people impersonating a robot in almost perfect synchronicity, only almost, mind. And what about the guy in a full size robototron replica outfit! This was followed by a mass party popper pull, poppers courtesy of the band, for the song War and Seek. Bassist Kraven Morrdeth then led a war march around the floor, leading a snake of fans conga-style, although I must stress it was NOT a conga! And where else would you see a mass of heavy metals fans told to grab a partner, that’s everyone grab a partner, and then dance a waltz to Dance of the Cyclops? At an Evil Scarecrow gig, that’s where. Who needs Strictly? And almost as a PS, vocalist Dr Rabid Hell shouts out “and don’t forget to cover one eye!” It’d is all too easy to lose track of the music that is driving all of the absurd goings on, but ya just can’t. Multi-tasking has become a non-negotiable none-option at an Evil Scarecrow gig. Even the final song of the main set, which was played live for the first time the night before didn’t escape the “we’ve got a dance for you all to do” proviso! And so, after a quick rehearsal, it was JUMP-HIT-DODGE-HIT to the chorus of End Level Boss! I cannot put in words adequately the spectacle I was seeing. Guess what? We had still the encore to come. If you’ve never witnessed the sight of a sea of people sidewinding as one like a cast of crabs trying to find their way back to the ocean then get you to an Evil Scarecrow gig, you may end up in that sea! The song? Oh yeah, nearly forgot. Crabulon, of course!

I left the Slade Rooms thinking, some of my friends had, the night before, been to the Rocky Horror Show. Food for thought there, I thought!

Seriously, I cannot praise this band enough for what they bring to the realm of heavy metal. The quality of the music is beyond doubt, as are their musical skills as individuals, but the affinity they strike up and maintain with the audience is what makes the band the breath of fresh air it is.

I believe they start touring again in April. Go and see them, you won’t be disappointed.