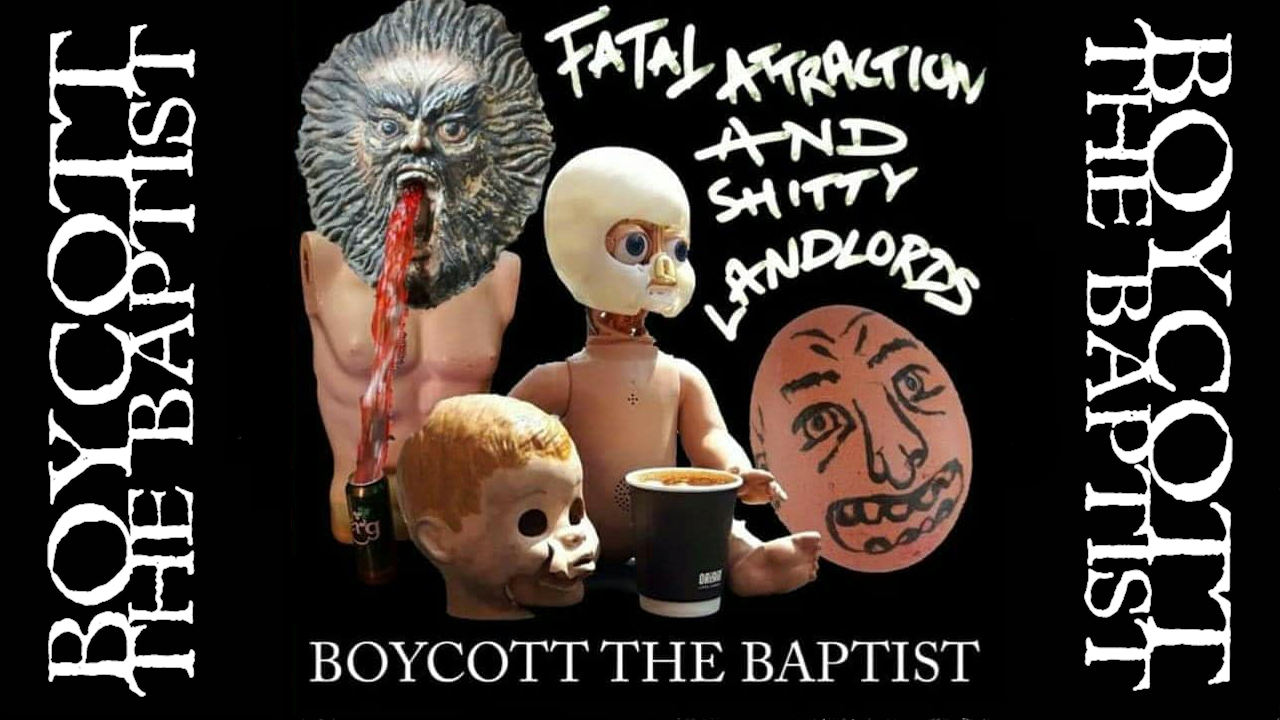 Formed in 2013, Carlisle’s Boycott The Baptist have made their name with a hardworking ethos that saw them take to the Jäger stage at last year’s Bloodstock following a series of releases through the latter half of the 2010s. Fatal Attraction and Shitty Landlords, their third full-length, dropped in early 2021 after being recorded during the 2020 lockdown (remember that?) at Wreck Studios. Mixing punk rock energy with dizzying grindcore and grim-faced sludge, it’s the sonic equivalent of receiving a set of short, sharp punches to the face over the course of 25 minutes.

An amped-up, throat-shredding version of the classic Aphex Twin track ‘Come To Daddy’ sets the tone by making an already uncomfortable number even more uncomfortable, and relentless. It works well in BTB’s own raw, energetic style and enlists guest vocal talent from Parasitic Twins, Harder Daddy and Clunge Destroyer to create a fun opening for the release. For what was written as a death metal parody back in the 90s, it seems to state the obvious that it sounds great with buzzsaw guitars and pounding drums.

BTB sure know how to play fast. ‘George Orwell Was Pretty Much Right About Everything’ is home to some genuinely impressive blastbeat drumming, while ‘Havin’ A Belter On The Helter Skelter’ switches up grinding rage with sludgy chugs and a dissonant, doomy intro. They never quite spiral off out of control, but as grindcore should, sound truly frenetic at the best of times. A couple of microsongs are even thrown in towards the tail end of the release. Would a grind album still be true grind without a sub-30 second number or two?

The more mid-paced, sludgier sections are just as good. ‘The Butchers’ is a fantastic headbanger of a track towards the end of the album, and the verses of ‘Time For Sloppy Seconds On The Priest’s Holy Mamba’ inject a little bit of melody into the savage aural assault. The squealing guitar riff that opens ‘Chris Barnes On His PMT’ is really quite memorable and inventive as well. Far from a one-trick pony, punk and groovy sludge metal is just as much a part of BTB’s sound as the grindcore label that they’re maybe best known for.

BTB are the sort of band that graft hard while having fun at the same time, and their sense of humour is allowed to shine over the course of this release. Whether making the listener chuckle with funny intro samples – take ‘Time For Sloppy Seconds On The Priest’s Holy Mamba’ or ‘Egg!’, for example – or with their song titles that range from the witty (‘Havin’ A Belter On The Helter Skelter’), the self-deprecatingly self-aware (‘Oooh, I’ve Got Angst’) to the deliberately offensive (‘DSR, I Hope You Die Of Aids’), they accompany their ugly, gritty music with a wry smirk on their faces.

If you consider yourself a connoisseur of UK underground grind or sludge, make yourself acquainted with Boycott The Baptist if you haven’t already. Fatal Attraction… is a good starting point as any. Their lightning-fast energy, crusty grooves and tongue-in-cheek wisecracks all make for a collection of songs that stays in your head and demands multiple listens. It’s a horrendous amount of noise for only two (!) members.

You can catch BTB live at the Alma Inn, Bolton, on Saturday with Geist, Wolfbastard, Nothing Clean and Tumanduumband. Failing that, they’re on at Carlisle’s Wreckfest in a couple of months, with Raging Speedhorn on as headliners.

‘All these crust bands talking about, like, war and dying and s**t – you’ve never died or been in a war’