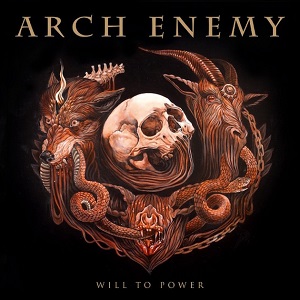 Alissa White-Gluz had big shoes to fill upon joining Arch Enemy in 2014. Not only was she replacing the iconic Angela Gossow, but she was also tasked with reinvigorating a band that had been creatively stagnant for close to ten years. There had been a handful of good tracks per release in the preceding decade, sure, but the group hadn’t issued a solid album since 2005’s Doomsday Machine. Thankfully, White-Gluz was undaunted both in the studio and on stage, and 2014’s War Eternal was a rousing success. Three years on, the Swedish melodeath giants look to pick up where they left off with Will to Power.

Opening ‘scene setter’ “Set Flame to the Night” duly gets things under way, but it’s the sort instrumental intro that’s a dime a dozen in the metal scene, and it barely even registers. “The Race” then comes out all guns blazing and breathes life into the album. The high octane anthem builds up quite a head of steam, and there’s a palpable energy and conviction about the song that is both gripping and contagious. Unfortunately, it’s a momentum that much of the rest of the album fails to match, and from this point onward it’s largely standard Arch Enemy stuff. Lead single “The World Is Yours” typifies the record, with a collection of semi lifeless riffs and a lazy chorus melody that really could’ve been lifted from any of their previous records. It’s all expertly played and immaculately produced of course, but there’s no element of risk or adventure. It just comes across like a watered down, Arch Enemy lite, regressing back to the insipid years that followed Doomsday Machine. Alissa gives her all, but her performance cannot overcome the bland instrumental work (solos aside… typically good lead work as you’d expect from the names on offer). She is allowed to flex her vocal muscles a little more on “Reason to Believe”, and although it’s nothing special, it at least tries something different, even if the only reason it will really be remembered in the future is due to the fact it’s the first time clean vocals have dominated an Arch Enemy song.

A name I haven’t mentioned yet is Jeff Loomis. The former Nevermore guitarist makes his recording debut with the band, but he had limited impact on the song writing front, with his contributions largely limited to lead work. This has been explained away by both Loomis and mainman Michael Amott as the latter preferring to steer the ship he’s captained for so long, and it is a sentiment you can understand. However, with such a gifted player at your disposal who could offer a whole new dimension to the music, it really is a missed opportunity, particularly with the album being as safe and uninspired as it is. I’ll readily admit I’ve never really been into Nevermore, but I do feel that Loomis may have been able to add a spark to Will to Power that it’s desperately in need of.

There are a few more tracks that dare to raise their heads above the threshold, most notably closing number “A Fight I Must Win”. Although it’s a largely one paced affair, it combines simple, brute force riffing with a rousing melodic refrain. It’s the sort of song that was made to end an album; the music marrying well with Alissa’s spirited lyrical matter. “Murder Scene” isn’t half bad either, and whilst it may not be radically different from much of the album, the irresistible guitar harmony in the chorus makes it a keeper.

Will to Power represents a few step backs for a band that had taken a huge stride forward with War Eternal. The descent back to the formulaic mediocrity of the latter years of Gossow’s reign is disheartening, but it is not a damaging blow. In 2014, Amott proved he could still deliver after years of treading water, so there’s no reason to think he couldn’t do it again. If Loomis were to be given a bit of creative input, then I feel the next record could go down as one of their best. That’s certainly an accolade I cannot bestow upon Will to Power however, and even at this early stage, I’ve little desire to hear most of these songs again. If I’m looking for an Arch Enemy fix in the near future, I’ll have to look elsewhere in their catalogue.

Highlights: “The Race”, “Murder Scene”, “A Fight I Must Win”

Will to Power is available worldwide on September 8th via Century Media Records, and is available to purchase here.