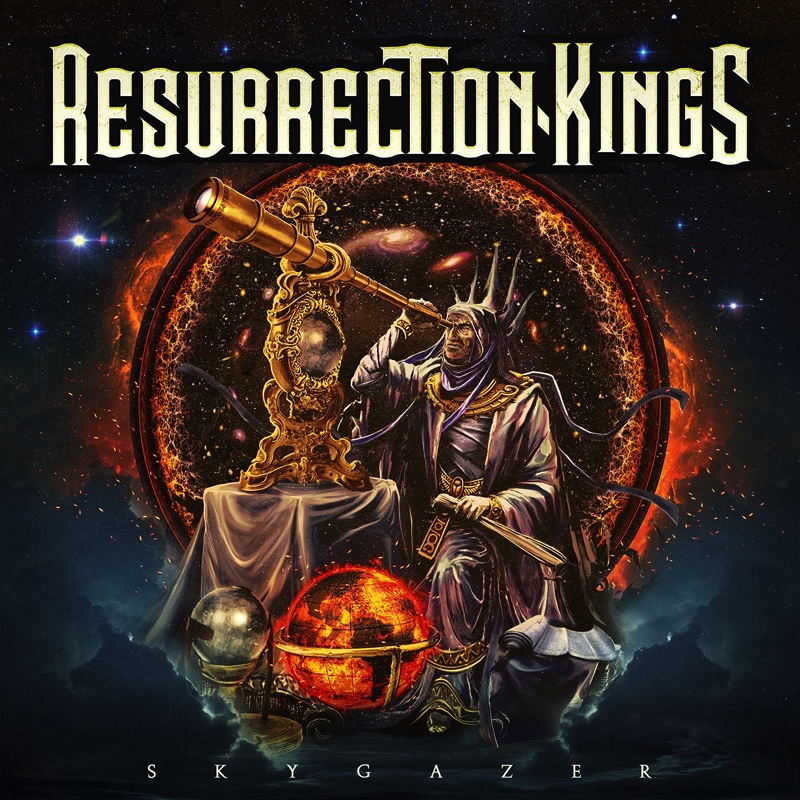 Since their self titled debut album in 2016, the Resurrection Kings have been a bit quiet. So what better way to come back in 2021 than with a sophomore of 11 tracks, produced by Frontiers king pin Alessandro Del Vecchio. Made up of Vinnie Appice (Dio, Black Sabbath , etc ) on drums, Chas West ( Bonham, Foreigner ) providing vocals and guitarist Craig Goldy ( Dio , Giuffria ) who also helps out on bass with Del Vecchio. The latter also lends a hand with the keyboards. It’s pretty obvious where this band lay their focus, with so much Dio influence. Resurrection Kings are true to their title, they are the guardians of that heavy rock/metal era of the 80s, with classic power chords, immense vocals and stand off drums.

’Skygazer’ with a rousing drum intro, guitar strings that echo and rampant vocals in the style of the late and great Wizard, has all the classic ‘Rainbow’ vibe about it. The band don’t hide or shy away from their influences and past glories, this is an album that celebrates the past and this first track is packed with glorious lyrics and masterful guitar playing. ‘Worlds on Fire’ continues with more pace and Chas utters some delightful screaming. He still has a good range and has always delivered to impress. I remember seeing him with Bonham when he was fresh on the scene. ’Tears’ steps down a little and tramps along with a gradual yet invigorating stomp. I like the intro to ‘Fight Against Our Pride’ staggering guitar again, that has a touch of bite. This is increased to a higher level and takes over half way, pulsating notes that fire in all directions. ‘Angry Demons’ with its eerie start, carries on with the ‘power ballad’ theme that you would find on any classic rock album, but this is quite dramatic and the feel is one of trepidation. The track certainly lives up to its title, but you’re in safe hands with this band. ‘Saviour Of Souls’ also has quite an inspiring introduction, a decent build up for this pounding of a number, heavy and steadfast it lumbers with acute pressure and manages to emerge towards the end, with Goldy producing some shining riffs.

A lush ballad ‘Don’t Blame Our Love’ turns the album around slightly. More ‘Whitesnake/Journey in essence and even more outstanding guitar, which hovers over the rhythm to make it an epic addition. ’Troubled Soul’ is also one that ‘Coverdale’ would love, full of passionate lines and deep in melody, spilling over the ground that’s covered by Goldy and Del Vecchio. ‘Calling All Angels’ hails the end of the album and bursts into full on, classic rock attributed ambiance. Stacks of precise guitar and keyboards that front Appice, who leads the way with his usual, brilliant stick work.

For anyone who needs a booster injection of Dio, Whitesnake or Rainbow, or infact any of that late 70’s thunderous rock, look no further than Resurrection Kings. With the superb production, that Del Vecchio provides, this is a stand alone piece of work. How can it possibly be anything less than perfect with such an elite lineup. Links below on how to get a copy of ‘Skygazer’ together with the bands social page.

‘For anyone who needs a booster injection of Dio, Whitesnake or Rainbow’

Tracklist: Skygazer. World’s On Fire. Tears. Fight Against Our Pride. Angry Demons. Savior Of Souls. Don’t Blame Our Love. Is This The End. Troubled Soul. Set Me On Fire. Calling All Angels

The album will be released on July 16, 2021 via Frontiers Music Srl. However, the band have released the first taste of music from the album, a single for the title track. Listen to the song and pre-order/save “Skygazer” HERE:  https://orcd.co/skygazer