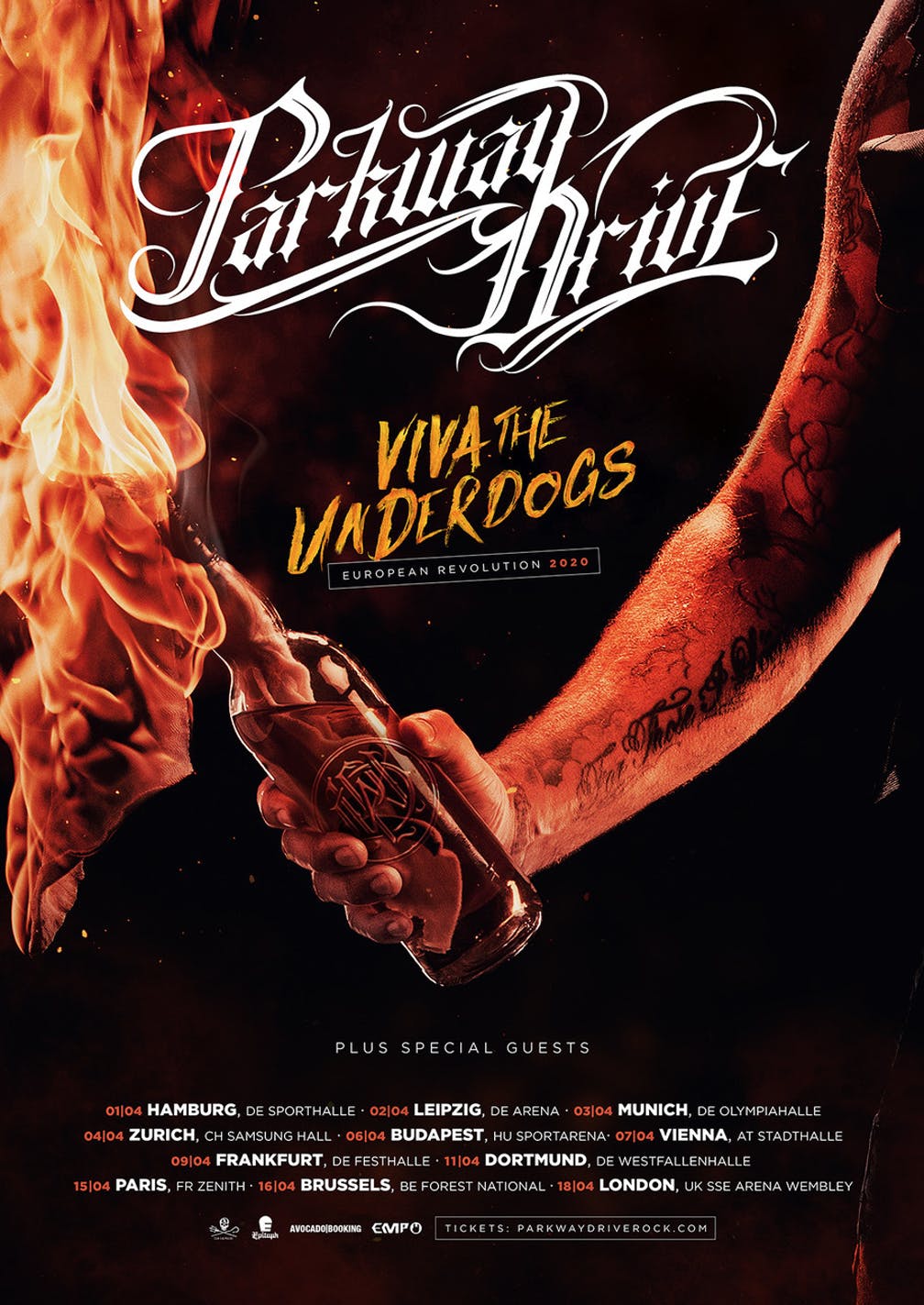 Parkway drive, the 5 piece band from Australia taking the metal world by storm, has recently released a European tour, playing bigger and better venues that they’ve ever played before. If you’ve read our review of their Nottingham gig back in February, you are aware of how great they are, great musicianship, various flashy stage antics and phenomenal stage presence, a true must-see for metalheads. However to aid those who aren’t all that familiar with the band we’ve put together a top 10 best Parkway Drive tracks!

The opening track that sets out Parkways arena dominating ambition sees them raise the bar for just how damn massive a modern metal riff can sound. The creeping strings and opening bass leave you in no doubt that something big is coming, then the riff hits like a sledgehammer. But just as things get going everything gets scaled back for the almost whispered vocals of the first verse. The cleaner sections could never be described as soft, more like a lurking beast waiting to emerge. The ebb and flow between these sections and the crushingly heavy riff, plus McCall’s scathing lyrical attack on the power hierarchy and its control of personal freedoms, makes for one of the most intense tracks of the bands’ career.

For anyone out there who is planning to see this band and doesn’t want to be viciously trampled upon, stay well clear of the pit when this song is played! Off the bands critically acclaimed sophomore album, this song is good, brutal metalcore from start to finish. Starting off with fast blast beats accompanied with some monstrous screaming from McCall and some nice melodic riffing on the guitars before moving into a slower heavier breakdown. One of Parkways heaviest songs to date.

There cannot be a top 10 Parkway Drive songs without the song that makes every single person in the crowd jump to when played! It’s hard to pinpoint whether it’s the raunchy, almost primal call of the chorus, the groovy breakdown towards the end of the song, or just the opening guitar melody alone that gives this song the power and energy that it has. At the same time it enabling listeners to let off a bit of steam, with the song possibly being about self-righteous people and how their actions eventually lead to their demise. Despite the nature of the lyrics, the song has a really upbeat and uplifting feel to it, perfectly encapsulating the energy and excitement of a parkway gig.

This song, despite not musically being all that heavy, is one of the heaviest hitters out of the bands’ entire catalogue. The song seems to be a really good blend of their old style and their new style, with rhythms and vocals reminiscent of Horizons/Deep Blue, with the atmosphere, ambience and more pronounced guitars of their newer works. The anger in McCall’s voice is unmistakably clear in the choruses and especially the intro. The verses have two different parts to them, the softer, much more ambient section primarily featuring only bass and vocals, and then headbanging groovier section, which builds up the excitement to the chorus. Did I mention that the music video for it is also probably the best one they’ve ever done?

Good ol’ classic Parkway, as Australian and metalcore as you could possibly wish for. It’s so shocking listening today how much the band have changed over the years, but back in the day this band were a full-throttle heavy metalcore band, and this song is one of the best examples of that era of Parkway. The song has everything that makes a good mid-2000’s metalcore song; a fast section with fast double bass, melodic but raunchy riffing, and fast aggressive breakdowns, and a slower section packed with stop-start breakdowns and melodic slower sections. Also despite what some may think about the nature of the song, the lyrics here are surprisingly deep. Overall the song shows that the band were just as competent back in the days of 240p as they are today.

Here’s where we get to the songs that really divide fans and it’s understandable as to why. As the first single for their 2014 album Ire, this song marked a strong diversion from the bands sound on their previous albums and it left many labelling the band as ‘sell-outs’ due to its slower, less aggressive sound. Whilst this is certainly an understandable argument, the catchy melody, the group chant in the chorus and McCall’s iconic screaming all give the song its undeniable Parkwayness whilst the lyrics include awe-inspiring lines such as ‘’One life, one shot, give it all you got!’’. Although it may not be one of the heaviest, most technical or indeed most deep songs, it’s probably the most likely track that’s going to get sung along to live!

Remember the previous comments about staying well clear of the pit for certain songs when seeing this band live? Well, that comment applies to this song as well, but FAR more so than any other song on this list. Taken off the bands third album Deep Blue, this song manages to induce fast and large circle pits almost immediately, however, the actual song itself is put together rather cleverly, having elements of metal and hardcore in separate parts of the song. The songs starts with a fast, thrash metal inspired intro, before moving into a slower and undeniably more hardcore inspired section, then returning to the intro melody, before moving into a different, yet even more hardcore section, before blending the two styles together perfectly with a slow breakdown with a guitar lead over the top. The progression of this song coupled with the fact that it’s one of the liveliest songs of the bands’ catalogue place it very high on the list.

The opening track to Parkway Drive’s most recent album, 2018s Reverence, soon put to rest any fears that the band were slowly taming their sound. A brief introduction sees Winston McCall whispering sinister threats to gods both evil and benign, before letting the ear battering main riff come forth with a scream of ‘because tonight I’m killing gods’. From there on out it is a devastatingly raw journey through the initial stages of grief and finding a ‘place to place the blame’.  The track perfectly sets the tone for an immense album full of anguish and rage.

It’s rather ironic that one of parkway drive’s worst albums is home to one of the bands best ever songs. The 4th track of Atlas has so many great qualities that make a good Parkway Drive song. The group chants, the breakdowns, catchy melodies and seriously good musicianship from all members of the band. The song itself is very heavy-hitting, at the start the kick drums and guitars interlocking rhythmically and it feels as though you’re being pounded constantly into the ground. The band then move from this fast-paced, high energy section, to a much slower hardcore flavoured breakdown. The lyrics in this song are also some of the bands best, with lines such as ‘we are the diamonds that choose to stay coal’ that cut right to the soul.

This list is particularly hard because almost all of the band’s songs have such a high level of quality that it’s hard to pick the best, but this one truly stands out as a compositional masterpiece. Whether it’s the opening clean guitar lead, the slow breakdowns, or just the warm tonality throughout, everything about this song makes it a parkway classic. A staple of the bands shows and a testament to sublime metalcore writing.