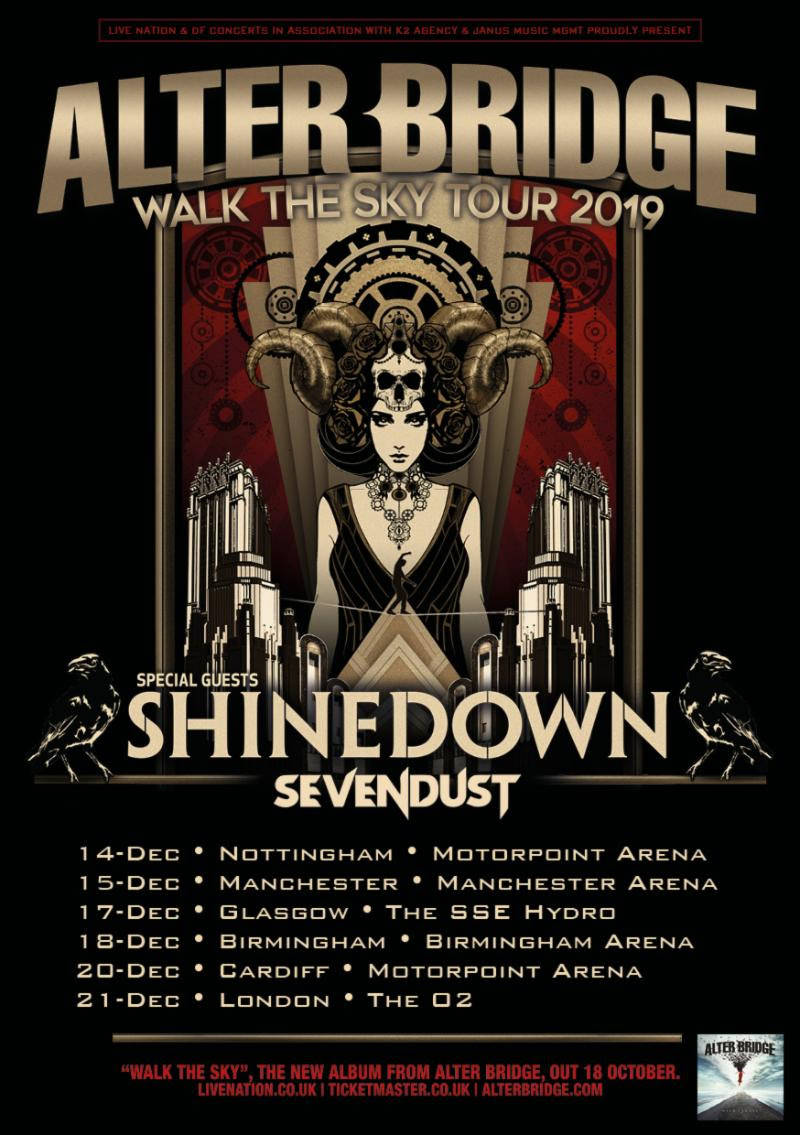 Alter Bridge are now less than two weeks away from releasing their highly anticipated album, Walk The Sky. Frontman Myles Kennedy and guitarist Mark Tremonti are two of the busiest men in rock: Kennedy released an exemplary debut solo album last year before joining Slash for another album and tour, and Tremonti released his fourth solo album alongside an accompanying novel. Now, with barely a moments rest, they are back with Alter Bridge promoting their upcoming release and tour. There is no sign of their well of creativity drying up, and it is this creativity that has seen Alter Bridge steadily climb to the top of the world of modern rock.

For the uninitiated, or just for those after a reminder, we’ve put together the top ten tracks produced by the band. If you get annoyed that your favourite song didn’t make the cut it may be some consolation to know that this was one of the hardest lists we’ve had to put together yet!

Kicking of the list is a track that crams everything that makes Alter Bridge great into one concise four-minute slot. A powerful riff, a thick and heavy rhythm section, intricate and melodic chordal work plus an emotional and uplifting chorus delivered by one of the finest voices in rock music. Alter Bridge have always had a knack for penning emotional lyrics that address the struggles people are going through and provide the inspiration to push through them, and while this isn’t exactly the subtlest of examples, it works beautifully.

One of Mark Tremonti’s signature techniques is to use non-standard guitar tunings to help him create intricate and beautiful chords. “Ghost of Days Gone By” is one of many fine examples of this, with a steady chord pattern in the background supporting the chordal melody in the foreground. It creates a mournful yet hopeful sound that makes this a very uplifting track, despite the reminiscing of the lyrical content. It also shows off the wide range of Kennedys vocal ability, with verses using his lower register, before building in power and pitch for the chorus and then taking a much darker turn during the middle section.

Not everything that Alter Bridge write is designed to elicit a deep emotional response: some of their material is simply no-nonsense, hard hitting rock music. “Ties That Bind” is one of the best examples of this. Bursting out of the gates to open their second album, Blackbird, the song is relentless from start to finish. The rapid-fire riff and Kennedys vocals are all very impressive, but it is the rhythmic work of drummer Scott Phillips and bassist Brian Marshall that really drive this one, giving the riff the depth and drive it needs to reach its full potential. Things are wrapped up by a guitar solo that highlights Tremontis skill in perfectly balancing melodic placement and technical wizardry.

While it is the more accessible singles that get the most media attention, Alter Bridge aren’t scared of longer and more elaborate songs. Lyrically, “Fortress” addresses the idea of seemingly permanent and untouchable institutions finally collapsing, and this theme is perfectly matched by desolate and haunting chord changes. The middle section takes a more hard-hitting approach, with a faster and heavier pace, before a slower closing sequence brings in the aftermath. A fully immersive experience that never runs the risk of dragging at any point in its nearly eight-minute run time.

One of the most heart-rending and emotional tracks in the Alter Bridge catalogue, “In Loving Memory” was written by Tremonti after his mother passed away. While obviously saddening, the song isn’t about giving into the sadness, it is about remembrance and inspiration. What begins as a single guitar part and Kennedys voice slowly builds in both scale and emotion throughout the track, coming to an uplifting crescendo in the second chorus. Kennedy again proves his worth with a vocal performance that plays a huge part in the overall feel of the song, making you feel the emotion in every word. For anyone who has ever lost a loved one, this song is sure to strike a chord.

The riffs just keep coming. “Come To Life” is another example of an Alter Bridge riff that becomes more than the sum of its parts because every band member is at the top of their game, creating a piece with a memorable melody and a rhythm that demands a physical response. It is a rare moment where Kennedy adds a slight rough edge to his normally squeaky-clean vocal performance, but for one of the heavier tracks it works. Tremonti adds some vocal variety to the chorus, making it one of those rare cases where you want to sing along to the backing vocals more than the main melody!

This is one of the most popular, if not the most popular, songs that Alter Bridge have ever written (“Metalingus” is ahead of it on Spotify due to its use as an entrance song for WWE wrestler The Edge). By Alter Bridge standards, it is a fairly simple chord progression and song structure, but it grabs you right from the start and never lets you go. If you haven’t gotten disapproving stares from fellow gig goers when you sing this with all the enthusiasm your inferior vocal range can muster then you aren’t doing it right. My one complaint about this track is that they never use the full band for it live, instead leaving Kennedy to a solo acoustic performance.

If being one of the best guitarists in rock wasn’t enough, it turns out that Mark Tremonti is also a pretty darn good vocalist as well. “Words Darker Than Their Wings” is the first time that fans heard him doing anything other than backing vocals (this was before any of his solo material had been released). To stand shoulder to shoulder with Myles Kennedy on lead vocal duties in no small task, yet Tremonti performs brilliantly. While not particularly heavy, it is a very dark track that builds tension right up until the release of one of the most powerful choruses the band have written.

While his vocals obviously get most of the attention, Myles Kennedy is also a hugely talented guitarist, as exemplified by the fingerpicked acoustic introduction to the opening track of 2013s Fortress. The song title refers to the hero Achilles who fought in the Trojan war of Greek Mythology, but the lyrics are fairly spartan when it comes to other references to the Iliad story. The song again highlights the bands skill in combining technically difficult and interesting musical structures into what is an accessible and highly memorable track.

There a certain iconic tracks that are instantly recognisable from their opening note or chord. Blackbird is one of them. It isn’t just the opening chord pattern that is iconic, it is the slow and thunderous riff, the emotionally weighted chorus, the extended instrumental sections… It is the longest song the band have ever written but still utilises every second to maximum effect. Its climax comes from the extended guitar solo that is more than worthy of being cited alongside the greats of the 70s and 80s as one of the best guitar solos ever written. Dark and heavy, saddening yet beautiful, it is the pinnacle of what defines Alter Bridge, landing it the top spot on our list.

Walk The Sky is released on October 18th via Napalm Records and can be purchased here.

You can find tickets for Walk The Sky Tour 2019 (with Shinedown and Sevendust) here.