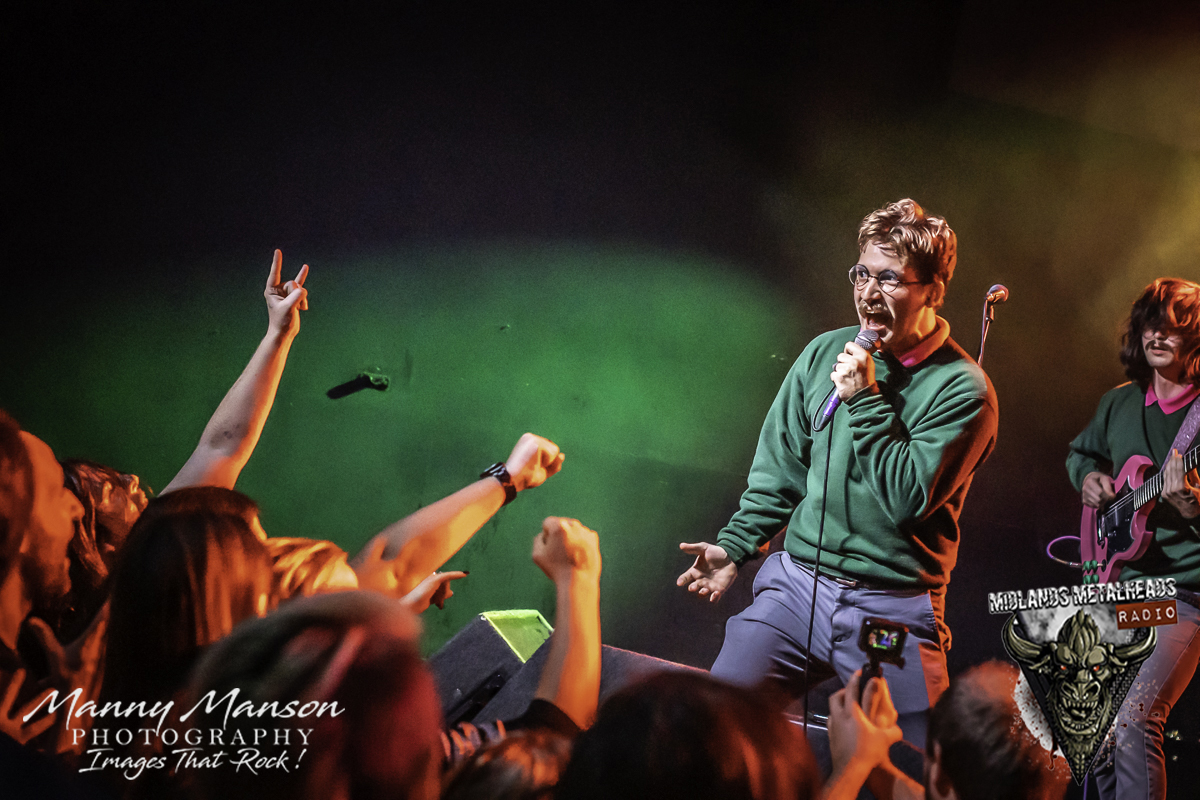 Hi Diddly Do! I’m sure there aren’t too many venues tonight that have more Neds on stage than you have fingers on your left hand; but the Rescue Rooms, Nottingham is definitely one of them as tonight it sees the worlds only ‘Nedalband’ hit the stage on the opening night of their UKilly Dokilly Tour. Yes that Ned Flanders inspired metal band have travelled from the Colonies especially to bring us ‘Brits’ a night of catchphrase fuelled music made famous by Homer’s god-fearing ‘Neighborino’!

Up first we have a Power Duo going by the name of ‘Brian Blessed The Band Not The Bloke’. an interesting choice of names, but strangely fitting when you see the guitarist ‘The Brown Lazer’ there is an uncanny resemblance to a young Brian! and how loud they play.

They call their music style, Grind/avant-garde/whateverthefuckwelike and that includes guttural noises by humans and some simply unrecognisable. They say their influences include Steeley Dan?? that’s probably in the fact that they both have drums and guitar… because that’s where any similarities end!

With song titles that just roll off your tongue like opener ‘Morrissey Themed Dystopian Future’, the colourful ‘Bonnie Langford verses Shit Bastard’ and not forgetting ‘Phantom Pooper’, ‘Sex Cog Monologue’ and set closer ‘Conspiracy Theory Dickhead’, it would be easy to dismiss this pairing as just another power duo. however with a room-filling sound, it was easy to overlook that there were only two guys making the racket, I mean music. At no point did it come across as thin and meaningless, well thin anyways. With a good-sized crowd already assembled it was encouraging to see them get behind Brian from the start. With heads banging and healthy banter, ‘Brian cruised through a set of eleven obscurely titled songs much to the crowd’s enjoyment.

I’m obviously too old to ‘get’ this new wave of animal-themed vocals, but I have to say I found it an enjoyable education and would say, judging by the crowd, what the Brown Lazer and Ben-Dubz ( drums and vocals ) have put together, went down a storm and in doing so got the crowd suitably warmed up for the main act. A job well done.

With Head Ned back off the Merch stand it was now time for the headliners to walk on stage.

Formed in 2015 in Pheonix, Arizona the band play themed music based on the character ‘Ned Flanders’ Homer Simpson’s god-fearing ‘Neighbourino’. Their song lyrics are based around catchphrases that the character uses. They call their brand of music ‘Nedalmusic’ which I guess is a parody of Metal, Metalcore and Parody Rock. If its good enough for Jack Black then why the hell not!

Dressed the same in grey slacks, green sweaters over pink polo shirts, round-rimmed glasses and moustache, The Neds looked like a pubescent school outing bursting onto the stage. Shred Ned picking up a bright pink Gibson SG (OMG), Dread Ned sitting behind his bright red pearl kit beneath a ‘Ned’ skull backdrop, Zed Ned sorts out his massive synth and touring bass player, Cred Ned, dons his mighty weapon. Vocals and all things Flanderish are handled up front by Head Ned. I can’t help thinking he looks a lot like Richard Dreyfuss from the Jaws movies! hmm.

Once on stage Head Ned takes on the character of Flanders, walking around the stage singing lines and gesticulating Flanderishly to the fans, he notices a party of 6 have come suitably Ned-attired and points them out as they dance around. Shred Ned breaks a string early on so has to restring his guitar, this gives Ned enough time to talk about the virtues of being left-handed and that right-handed common o garden items will kill you. He gets the crowd to do a show hands of who is left-handed, unbelievably everyone plays along and puts their left hand up.

Playing a Beatles favourite as their only cover ‘Yellow Submarine’ becomes, you guessed it, Flanderised into the Nedal version ‘Yellow Family’ a parody song about the ‘Yellow’ family on the Simpson’s, this starts off recognisable but soon drops into pure Nedal complete with guttural groans and whoops. The crowd enjoy this as they sing along.

The crowd call out for ‘White Wine Spritzer’ and Ned plays with them briefly before giving in! I think it was down on the set list but couldn’t see or get hold of a copy anywhere. This was released as a single in October 2016, they’re only single to date. The majority of tonight’s show seems to be taken from their first studio album ‘Howdilly DooDilly’ released in November 2016. they did play a couple from ‘Howdilly TooDilly’ which is due out soon. again without a setlist, I can’t confirm which songs as, sadly, a setlist was not forthcoming.

The show highlight was when Head Ned strips off to reveal Ned’s Red and Blue Aerodynamic Ski Suit which can only herald the singing of ‘Nothing At All’, some would say it’s Flanders greatest quote, it came about when Homer met Flanders on the ski slopes and the term ‘Stupid Sexy Flanders’ was born (s10e11 ‘Little Big Mom’ for all the nerds).

With other songs that include references to donuts, pressing the destruct button, and not wanting any damn vegetables, Okilly Dokilly certainly came with a show heavily armed with unimaginative songs created from the genius character of Matt Groening, sadly the lyrics consist of the ‘Flanderism’ and very little else. The fact that the crowd turned up is a testament to the fact that for the time being this band has a following, much like Steel Panther with its sexually inspired lyrics, however, they need to evolve as a show if they want longevity. Steel Panther shows have gotten stale of late, almost word for word for the last 3 or 4 years, still enjoyable but forgettable at the same time.

An enjoyable show with a lot of energy being thrown about on stage, excellent musicianship and Head Nead is an excellent frontman but I came away feeling that there could have been more insanity. If a god fearing guy was given the chance to ‘vent’ without judgement or persecution I feel saying ‘Howdilly Neighbourino’ might not figure too high on the list.