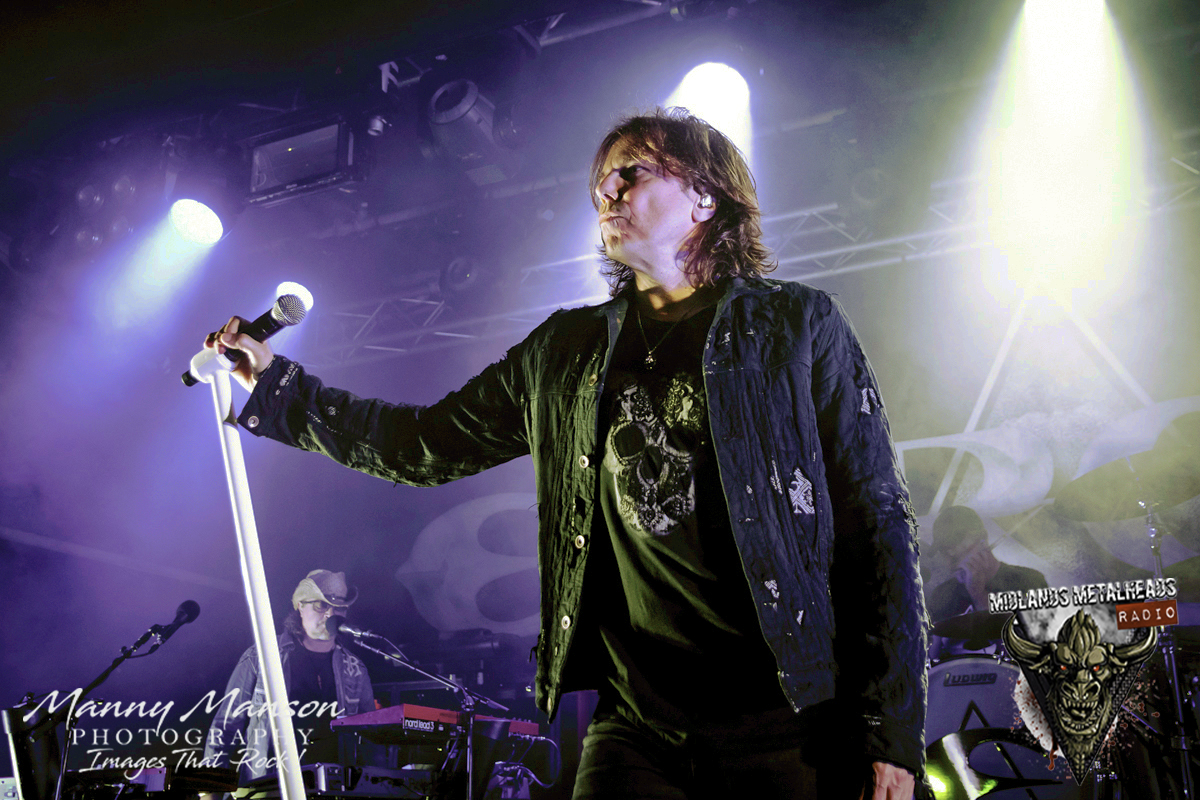 Once again Nottingham’s Rock City plays host to one of Sweden’s finest, Europe, on the UK leg of their Walk the Earth album tour. This is their 11th studio album since they smashed onto the scene with everybody’s favourite, The Final Countdown. A tune that has now earned its right to be played alongside party greats such as Hi Ho Silver Lining, All Right Now and Silver machine.

A long queue greets us as we arrive an hour before the doors open, in fact, Dave, the number one in the queue had been sat there for more than two hrs waiting patiently with his good lady. Arthritis means he needs the barrier to help him stand through the show so he makes sure he’s there in plenty of time. Yes, he did indeed make the barrier.

In support on the UK leg of the tour and in fact into Europe itself are none other than the mighty King King. This Glaswegian fronted Blues/Rock band have been touring non-stop around our little isle for what seems like forever, and now it would seem it has paid off as they now have the chance to play to a much different and larger audience, in fact, this tour includes a night at the much-hallowed Royal Albert Hall.

King King have built up a strong fan base and it seems that most of them are all here tonight as familiar cheers strike out as the boys take to the stage. Singer and guitarist Alan Nimmo walks on with that huge smile on his face and by now the trademark Kilt swinging away as he does so. This band enjoy what they’re doing and don’t take anything for granted. Having been around for several years the guys know the ropes, and as they get into their opening song, of a sadly very short set it becomes apparent that they are well practised and know how to play the crowd.

(She Don’t) Gimme No Lovin’ from Exile and Grace, has the King King faithful bouncing away from the first strum.

The band are right at the front of the stage so it’s nice to see drummer Wayne Proctor up close as he beats out a healthy drum note or two. His face pulling can now be experienced by all as he deftly cruises around his kit. Backlit by yellow and red spots and the now obligatory smoke he makes a canny picture for the fans to capture on the many phones that have now suddenly burst into life.

The rest of the band are playing to the crowd on either side. On Bass, we have ‘Duck Face’ Lindsay Coulson, one of the nicest guys you could meet, in shirt and jacket knocking the bass out of his Musicman Stingray bass. ‘Throwing’ in that face and trying not to laugh as his picture is captured for all the world to see as he momentarily looms out of the dark side into a brighter spot almost on queue. On the other side, we have new boy Jonny Dyke on keys. He replaces longtime ivory tinkler Bob Fridziema who has now moved on to play with the Sari Schorr band (this night at the Robin 2, Bilston). Jonny has become an instant favourite with the ladies. Sadly, tonight he seems to be sitting in front of the smoke machine and a green spotlight, in fact he’s sat looking like an extra from the Monster Mash video by Bobby Pickett.

Their brief set consists of four songs from ‘Reaching for the Light’ Rush Hour, Stranger to Love, Waking Up and crowd favourite You Stopped the Rain. And a single song from each of ‘Exile and Grace, (She Don’t) Gimme No Lovin; ‘Standing in the Shadow,’ Long History of Love: and from Take my Hand we have Lose Control.

With the crowd joining in the sing-along during Rush Hour it was evident by the reaction that they were going down a storm. The bands’ easy nature and Alans great front-man ship had won them many new friends. I’ve been going to Rock City for over 30years and I can honestly say I have never seen a crowd response better for any support band in all those years. Alan and the boys certainly gave Europe something to aim for as the bar had been set, well and truly, above head height.

A short interlude followed where you could go and meet the big man down at the Merch’ desk. This was being manned by Michael, Alan always gives him a shout out as ‘Mick’ flies the ‘Merch’ and drives the tour bus (van). It’s always great to catch up with Mick, yet another loveable character.

The lights dim as the smoke pours from the overworked smoke machines. Bass player, John Levén casually walks across the stage, acknowledges the cheers from the crowd as he does so, he’s followed by keyboard player, Mic Michaeli resplendent in his cowboy hat and shades. On the other side, guitarist Norum takes to the stage amidst a wall of fog and a backline of huge speaker cabs, an indication of how loud it may be perhaps. Baseball cap wearing and more earrings than Keith Richard, mighty beat master, Ian Haugland is already sat behind his impressive kit, armed and ready as the great man himself, Joey Tempest, walks onto the stage, grabs the mike stand and stands their arrogantly not doing anything as he absorbs the atmosphere. The crowd are going nuts!

And we’re off straight into the title track of the self-named latest Album Walk the Earth, a keyboard intro defies the dark menace that follows as Joey sings about walking the earth with hands held high, we are treated to the excellent songwriting and almost Prog like symphony that ebbs and flows around this cracking opener. This is followed by a second track off the new album, The Siege, another dark heavy riff comes from Norum’s Strat. Joey is strutting around the stage, bathed in first blue and then green light making it fun for the ‘Togs’ in the pit, one I see has given up and is enjoying the set, maybe he’ll have more luck with the third and their final track. Rock the Night sees us transported back in time to the fourth album, The Final Countdown released in 1986, in fact, we’re in for a bit of a treat as 4 of the 20 songs are from this classic album. This has a bit better lighting and the ‘Togs’ go wild, like feeding time in the Zoo as they clamber across each other to get the shot, and do it in the 3 minutes of the song. Joey teases them by posing as only he can, one minute hanging around Levén’s neck as he plays the bass, the next he’s over with Norum as he smashes out a solo, oh wait he’s now over at the keyboard giving Michaeli some attention. Everyone will appear in the pictures alongside Joey.

Smiling and playing to the audience is what Europe are about. Having been around since 1979, they too are accustomed to performing for the fans. Standing on the monitors Tempest sings and gestures to the crowd throughout the night, telling the gathered fans how great Nottingham is and how they love playing Rock City, he jokes about telling the band that one day they’ll be really good and the band asking when will that day arrive.

Drummer, Haugland is in the spotlight as the band take a well-earned rest. The William Tell Overture strikes up and we have a drum solo to accompany it, complete with crowd shouts and drumstick pointing. This entertaining couple of minutes is certainly not drawn out like so many drum solos of late.

Superstitious follows, from the album Out of this World and it sees the band drive off into Whitesnake territory part way through, Here I go Again has the crowd singing out loud as we have a couple of bars of this Coverdale favourite thrown in. There is never any doubt that Tempest’s vocal can easily handle this classic track, and then it’s back into Superstitious which finishes the set-off.

Tempest screams for the crowd to make some noise as they leave the stage but almost straight away they’re back on to smash out two of my favourite tracks, both from the first album. To start we have the energetic Cherokee which has the crowd singing in anticipation for the last song of the night. No Europe gig can be complete without ‘that’ song, the Albatross in the room that is The Final Countdown. After an hour and forty minutes of high energy rock, the band are now bouncing up and down as the keyboard smashes out that classic intro to one of the best songs of the 80’s. The crowd are up, the whole of Rock City is bouncing along as Tempest sings with the crowd. And it doesn’t stop until the last note from Norum’s guitar and Michaeli’s keyboard. Tempest, standing on the monitor’s, waves his mic around the crowd in appreciation of how that song has cemented the band and fans together over the years. Love it or hate it, it still has the same effect on fans after all the years and the foundation of every Europe gig since.

Genius saving the best until last as it let us hear some truly great songs tonight. Carrie is always a crowd pleaser as is Firefox and Last Look at Eden. We heard some great tracks from the new album, the title track Walk the Earth and GTO, a fast-paced song about burning up the open road certainly rocked and gave Norum a great vehicle to show off.

The whole night has been a masterclass in how to entertain a crowd properly. No fancy trickery, costumes or light shows, although a little less block lighting and fog would be great.

King King smashed their set and set a very high bar but Europe came out and easily stepped over it and showed why they are still around nearly 40 years later.

Would I recommend these bands, you bloody betcha I would, in fact, I’m looking for flights to try and catch them in Europe, work permitting of course?