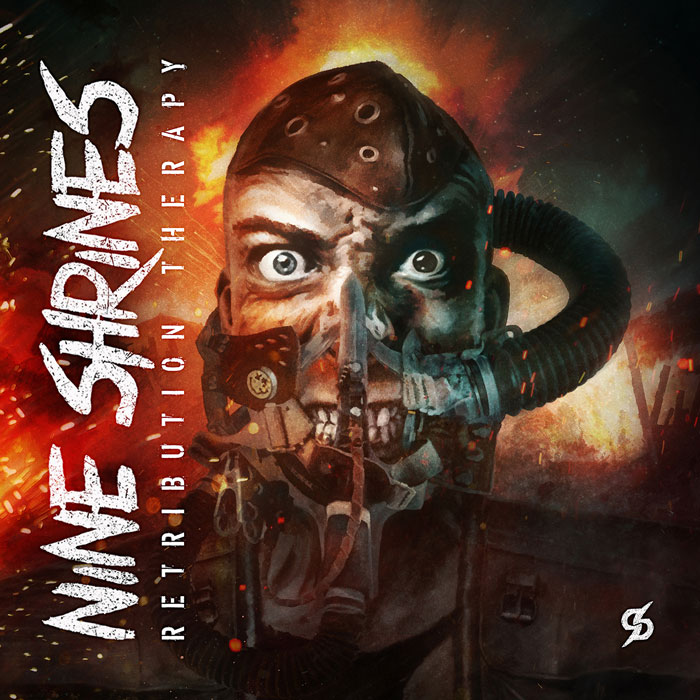 Emerging from the remnants of various 00s metal bands, Nine Shrines first began getting attention with 2017s debut EP, Misery. Fast forward a couple of years and their debut full length, Retribution Therapy, is ready for the world. The band claim that much of modern rock has become ‘very cookie-cutter’ and that Nine Shrines themselves ‘try their best to push boundaries’. Whatever they’re doing, it is clearly working, as they have successfully attracted a production team that have worked with several high calibre bands over the years, including My Chemical Romance, All That Remains and Papa Roach. All the pieces seem to be in place for them to succeed, all that’s left is the songs themselves.

Right from the off you can tell where Nine Shrines have their roots. The punchy drop-tuned riff and radio metal chorus of opening track “Nimrod” hark back to all the Kerrang and Scuzz friendly bands that people of my generation grew up with. The predominant elements are post-grunge: if you’ve listened to the likes of Three Days Grace, Sick Puppies, Rev Theory, Trust Company etc then you’ll recognise much of what is going on. The sound is brought up to date by slight metalcore leanings (eg, the kick drum more obviously syncs up with the main riff) and some experimentation with rhythms and riff styles. The slightly off-beat riff of “Ringworm” comes across as clumsy, but syncopation is used to much better effect on the djent-style “Conjure”, where the background riff adds to the eerie atmosphere created by Chris Parketny’s haunting delivery. “Dead” and “Sick Like Me” are another two that add little trills and off-beat notes to the riffs to take them a level higher than standard radio-rock fare, but they only last as long as it takes for the first verse to come in. After that the standard chugging behind the vocal line takes over. Not that anyone can complain about the vocals: Chris Parketny gives it his all, whether that be the clean yet distorted melodic lines or the full on screaming on tracks like “Counterfeit”. Lyrics can live or die by their delivery, and you can often forget the silliness of some of the lines because they are delivered with such conviction. The title track is the main example of this, with the gang chants of ‘retribution therapy, the only remedy, is to burn it all to ashes’ on the verge of sounding comical, but you somehow get caught up in it anyway. My favourite lyrics are in “Ringworm”, particularly ‘here is the church, here is the steeple, lining their pockets while they starve the people’: a line that has garnered extra meaning in the wake of the recent Notre Dame fire and the huge influx of money pledged to its restoration.

For a band that ‘does their best to push boundaries’, Nine Shrines have made a remarkably comfortable album. There is nothing controversial, nothing difficult to get your head around and, ultimately, nothing that sounds new. Yet it is highly listenable, engineered for instant engagement and gratification. The best tracks pack a heavy, mid-tempo groove that will get any crowd moving, and all have a melodic chorus designed to be powerful and emotionally engaging (although with varying degrees of success). While there are several minor things that could use refinement, the real thing holding Retribution Therapy back is its similarity to what has come before. Listening to it I couldn’t stop making comparisons to other bands (some mentioned earlier on). I feel that Nine Shrines need a bit more of an edge to really push boundaries and establish their own identity. Will that stop me singing along to the likes of “Pretty Little Psycho”? No. But I’m doing it more out of nostalgia than excitement.

Highlights: “Ringworm”, “Pretty Little Psycho” and “Sick Like Me”

Retribution Therapy is available from 26th April via Mascot Records and can be purchased here.