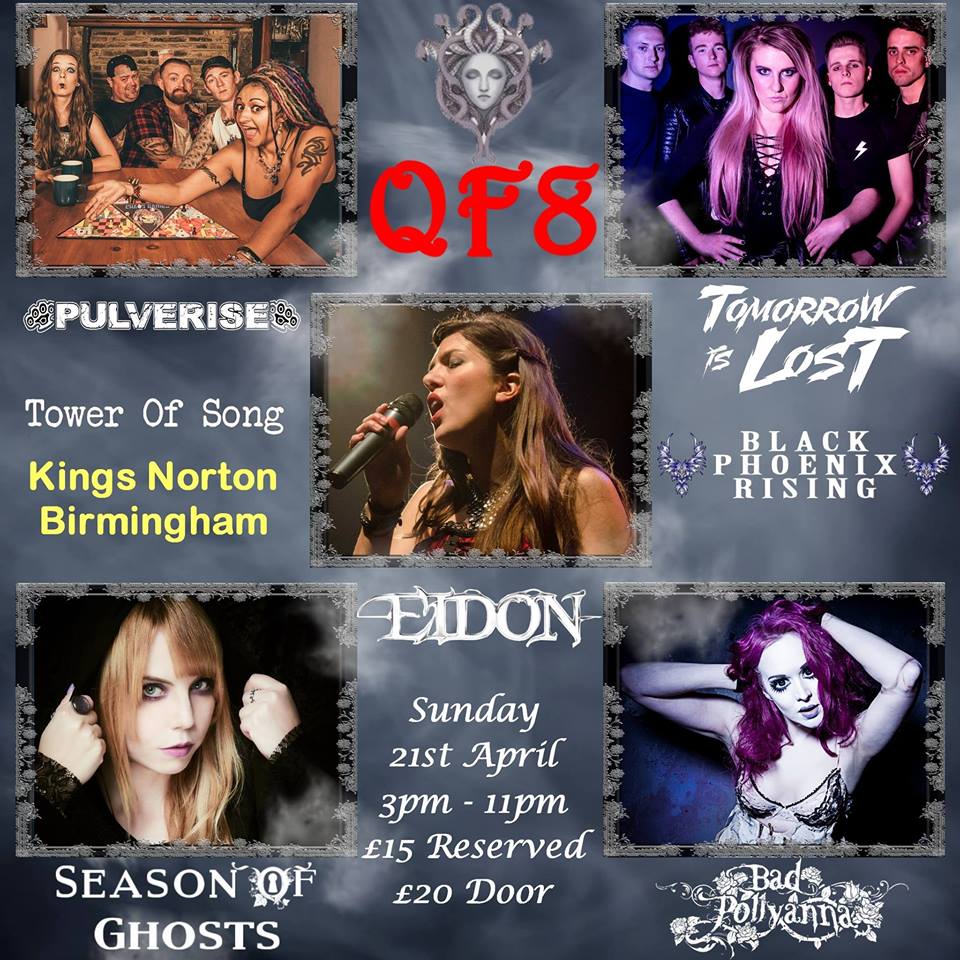 The Quinphonic 8 festival took place this year on 21st April 2019, (Easter day), at The Tower of Song, Kings Norton Birmingham,
Again Introduced and promoted by Black Phoenix Rising Metal Forum, and in the support of female inclusive bands,
and again totally ‘self funded’

To be honest i was a little unsure whether this would prove to be as popular as Quinphonic 7  , being on Easter day, and the first hottest day of the year.
and if anybody that had spent the morning, stuffing themselves with chocolate could be bothered to turn up, I need not have thought this as the place was packed, as with every other Quinphonic Festival, along with the normal mass of cuddly ‘Unicorns’, that have apparently now become an official part of the festival as much as the bands themselves.

We arrived early (almost 2 hours) to apparently ‘avoid the Easter traffic’ .. There wasn’t any!
The band gear was already being loaded into the venue, so we popped over to KFC, handily across the road, for lunch.
We said our hello’s and introductions to everybody we knew.

The venue soon started to fill up as the heat from the beautiful Sunshine outside sored.
By the time the first band from Leeds, PULVERISE, hit the stage, the heat was quite intense inside. They delivered their normal blinding stage show
that they have become well known for, and Jo-Jo Milwards energetic ‘Madness’ never ceases to amaze me

Second band on were TOMORROW IS LOST, From Newcastle – Upon- Tyne. Superb lead vocals from Cass King
the Audience now were excited and moving ever closer to the stage to take photos. Much head nodding was also starting.
I was amazed to see that many of the older fans in the audience, knew all the lyrics to the songs, and the band obviously had made many fans.

BAD POLLYANNA, stole the show for me. This band from West Yorkshire, put on a fantastic One hour set.
Olivia Hyde, being one of the best female Vocalists i have ever heard, as well as being very photogenic.
I Think in my personal interests, that they should have been higher up on the line- up, although, all bands are treated equally.

EIDON, Had travelled from Tours in France, to be on this line up, bringing with them an array of Symphonic Metal.
I think a band, as this one, are suited to  a larger stage and venue, as vocalist Gabrielle Morche, belted out her operatic tones.
Some great keyboard playing from Cécile Vollet

My Husband thoroughly enjoyed their set.

SEASON OF GHOSTS, were the final band of the evening, and announced, by now to a very packed and hot venue, that this was actually their first played gig ever in U.K, showing a devoted audience, just how much a professional band they are. Their set was fantastic

Each band played an hour set, timed almost perfectly to the last minuet. The stage in this venue is tiny and not much room for the band, BUT,
the sound is BIG!

The Quniphonic Festivals continue to become a resounding Success, The ‘Quinphonic Faithfuls’ are growing at an astounding rate and ticket sales are always sold out
Quinphonic Festival 9 2020 has been announced, with the line-up already almost complete with bands eagerly wanting to be part of this great festival, which continues to grow, yearly