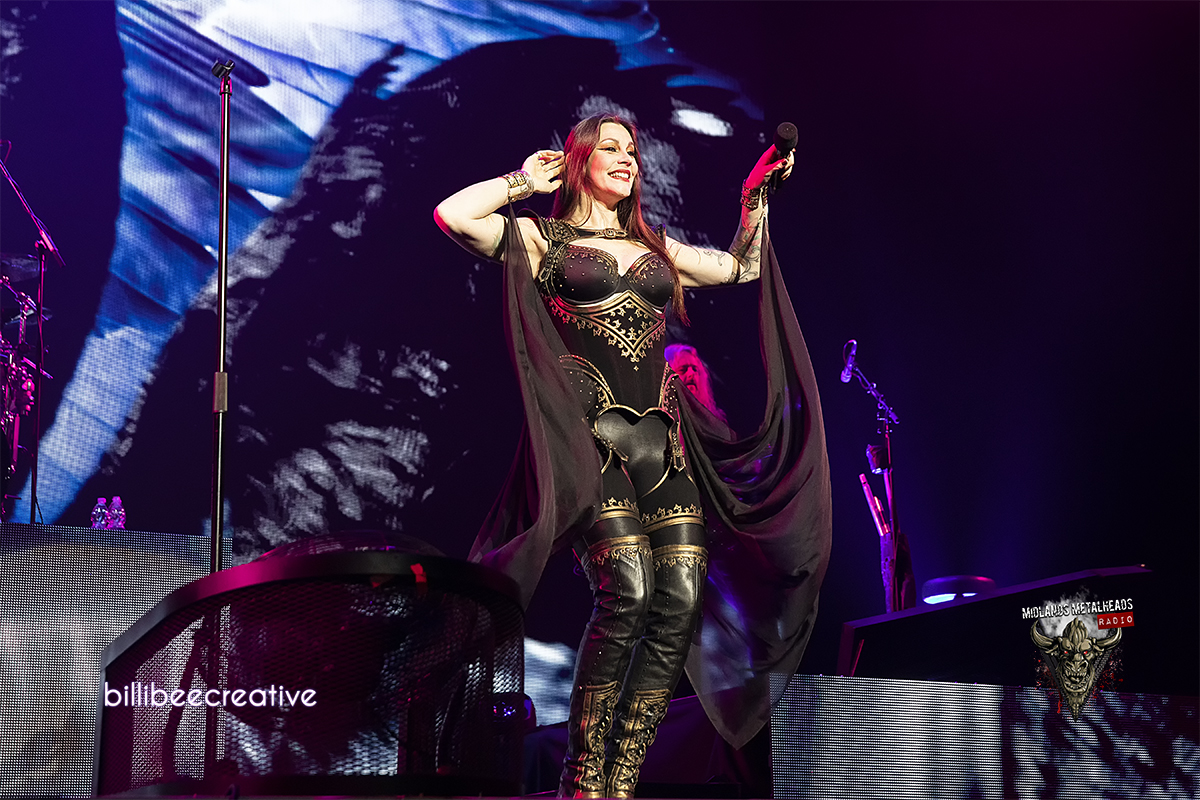 There’s only one support band for tonight’s show, Beast In Black. I was shocked at how much of a “ballad” sound this band has, as it isn’t particularly what I would expect for a support for Nightwish. However, as their set goes on, I notice that they do infact have a symphonic metal vibe so to speak, with a few backing tracks of orchestral instruments. The vocals are very high and Axl Rose-esque, which is very impressive, but for the most part the crowd doesn’t seem to be reacting too much to this band. There is the odd song in which the crowd claps along and the odd between song joke that the crowd laugh at, but overall this isn’t a band many of the crowd are excited about. At the end of their set they state they will be at merch to meet fans, which is definitely something I wouldn’t normally expect in an arena so I give them credit for that, and in all fairness, they receive high applause at the end of their set, so maybe they gained themselves some new fans this evening.

When a video appears on the screen behind the stage and a backing track begins, at least half of the crowd rush to the front. A video soon begins asking the crowd to put away their phones. Now usually I find this quite off-putting, as it is the individual’s choice if they want to be on their phone. However, Nightwish’s video was quite quirky, it was all about “going back in time”, which relates directly to the “Decades” tour, which is about the band doing just that. The video gets a laugh and applause from the crowd and afterwards I only see one person infront of me recording on their phone. Then begins a one minute countdown, and the show begins with some instrumentals courtesy of England’s very own Troy Donockley. This is the man who gives Nightwish shows its important dose of tins, whistles and various other instruments. Now as much as Nightwish fans (including me), clearly love this music during a Nightwish set, it doesn’t go over well as an intro. It is far too slow of an introduction to any set, especially one with a loud 1-minute introduction.

However once the full band begins everything is loud and metal and there’s plenty of pyro! Dark Chest Of Wonders and Wish I Had An Angel are the first two songs. At the beginning of Dark Chest , Floor isn’t hitting those high notes but by the end of the song she does, and she continues keeping it up throughout the entire night. I’ll be honest, despite hearing very good things about Floor’s singing live, I had never seen it myself, so I had my doubts, but she killed any doubt I had very quickly. For all of Nightwish’s old songs, which is the majority of the setlist for this Decades tour, she hits the opera style notes perfectly, whilst almost somehow making each song her own. In particular, Gethsemane, Sacrament of Wilderness and The Kinslayer are the moments during this show where I am truly blown away by Floor’s vocal range.

Of course Floor is not the only one blowing minds tonight, every other member is still playing as passionately as if they are a brand new band. 10th Man Down has some crazy fast drumming, Getsemene includes two guitar solo’s, aswell as one from Troy with his many instruments, and Elan has a keyboard solo from the one and only Tuomas Holopainen, along with more from Troy and guest drummer Kai. In regards to the setlist, this tour really is a treat for Nightwish fans, as it includes songs that haven’t been played in many years, such as Dead Boy’s Poem and Elvenpath. Surprisingly though, the two songs that get the biggest reaction from the crowd are the only 2 songs on the setlist from the Annette-era. I Want My Tears Back has the crowd dancing more than any other song tonight. It gets a massive applause afterwards and as soon as the intro for next song, Last Ride Of The Day begins, the crowd screams. These are clearly songs the fans still want to hear, which as a big Annette-era fan, made me pretty happy. Through the night we have more songs showing off Troy’s talents, which is taken by the crowd much better now we’re in the midst of the show.

The stage set-up also definitely deserves speaking about. Pyro is used on a regular basis for the heaviest parts of their set, which is important as there is a such a mix of slow and heavy songs, keeping the crowd hyped for the heavy parts could be a challenge, but it is a challenge Nightwish have conquered tonight. The background videos behind the band are very interesting, with most giving a 3D look, and some including album artwork for whatever song is playing. To make things even better, the band play for an entire 2 hours, although I’m sure the crowd would happily see them play for even longer.

Honestly, I’ve been trying to think of something critical to say about this show but I can’t. Nightwish have been around over 20 years now, and are still top of their game when it comes to live shows.

Check out the full photo gallery from the show here.