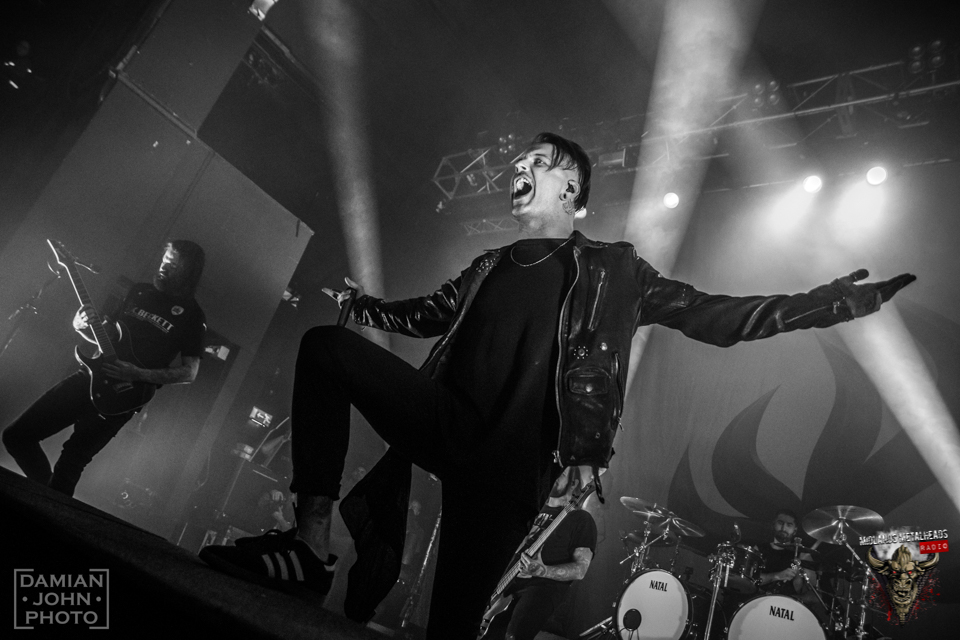 This Black Flame tour is a massive line-up, it has openers Crystal Lake, Cane Hill, and main support 36 Crazyfists. Unfortunately for me, I missed Crystal Lake but if you’re a fan of good metalcore, I would recommend giving them a listen. I get to the show as Cane Hill start. These guys are clearly musically talented, and I can’t fault their actual playing, but they don’t get a great crowd reaction. There’s not much crowd movement, which at a metalcore show, isn’t a great sign. Next is main support 36 Crazyfists. These guys get a much better reaction, and considering they’ve been in the game for over 20 years, it’s not surprising. After only a few songs the lights go down before they play their next song and the crowd start to chant Crazyfists. To get a chant for more, when it’s not even an encore, and they’re a support band, shows that this is a band the crowd really love, maybe even as much as Bury Tomorrow themselves. There’s a LOT of singing along, jumping, mosh pits, and everything in between. The only thing I will say is that their newer songs do not get anywhere near as a big a reaction as their old songs, so maybe this is just a nostalgia trip for most of the crowd. Their set finishes to plenty of applause from a now already sweaty crowd.

As soon as Bury Tomorrow begins, the whole crowd is singing and screaming along. Every song they play tonight has some great sing-along parts, which the crowd don’t falter with at any point. Thankfully you can still hear Dani and Jason’s vocals through the crowd; both are which have only gotten better over time. Dani’s screams in particular seem to be even heavier/deeper than from when I’ve previously seen them. They play 7 songs from Black Flame tonight and not a single one gets a lacklustre response. The best moment of the night is before Last Light begins, Dani asks us to put our arms around the people next to us, and of course when Last light begins, we all jump together. People usually feel the community feeling at a rock show but to physically all jump together just cemented that feeling, and hey, it’s fun. Even for the other songs during their set you really can’t help but jump to this band and these songs. Not only are they catchy songs but the band don’t let up their energy for a minute and it makes you want to join in. There was also faultless guitar work in the form of multiple riffs.

One thing about this band that really makes them stand out from the crowd is the amount of thanks they give. They give a speech between almost every song. They thank the fans for getting both Black Flame and Earthbound into mainstream charts, they talk about how we’re a community, how we shouldn’t let anyone judge us based on our music taste and how we dress, how they don’t take any of their success for granted, how they want us to get our money’s worth it, and even shout out security for keeping us all safe. This is the most humble band you will ever see or meet. There are perhaps times where you think, they could’ve played a whole extra song or two instead of this, but it’s honestly nice to hear a band talk to the crowd and really connect with them without the classic “This is the best show on this tour guys”. They actually mean what they’re saying. My only downside of this show is the lights. For each song the stage is just… a colour, like red or yellow or blue, which seems too simple for a show as big as this, and makes it hard to actually see the band. Now that Bury Tomorrow are finally getting the fame they deserve, I hope they can improve their actual stage setup and light work, as that combined with their great performance would make for an overall killer show.

As a whole, Bury Tomorrow are a very fun band to see live. Whether you like a little dance, jump, mosh, sing-along or crowd surf, you can do any and all of it at a BT show, and even if you don’t feel like it when you get there, this is a band that will put a smile on your face.

Check out our full photo gallery from the night here.