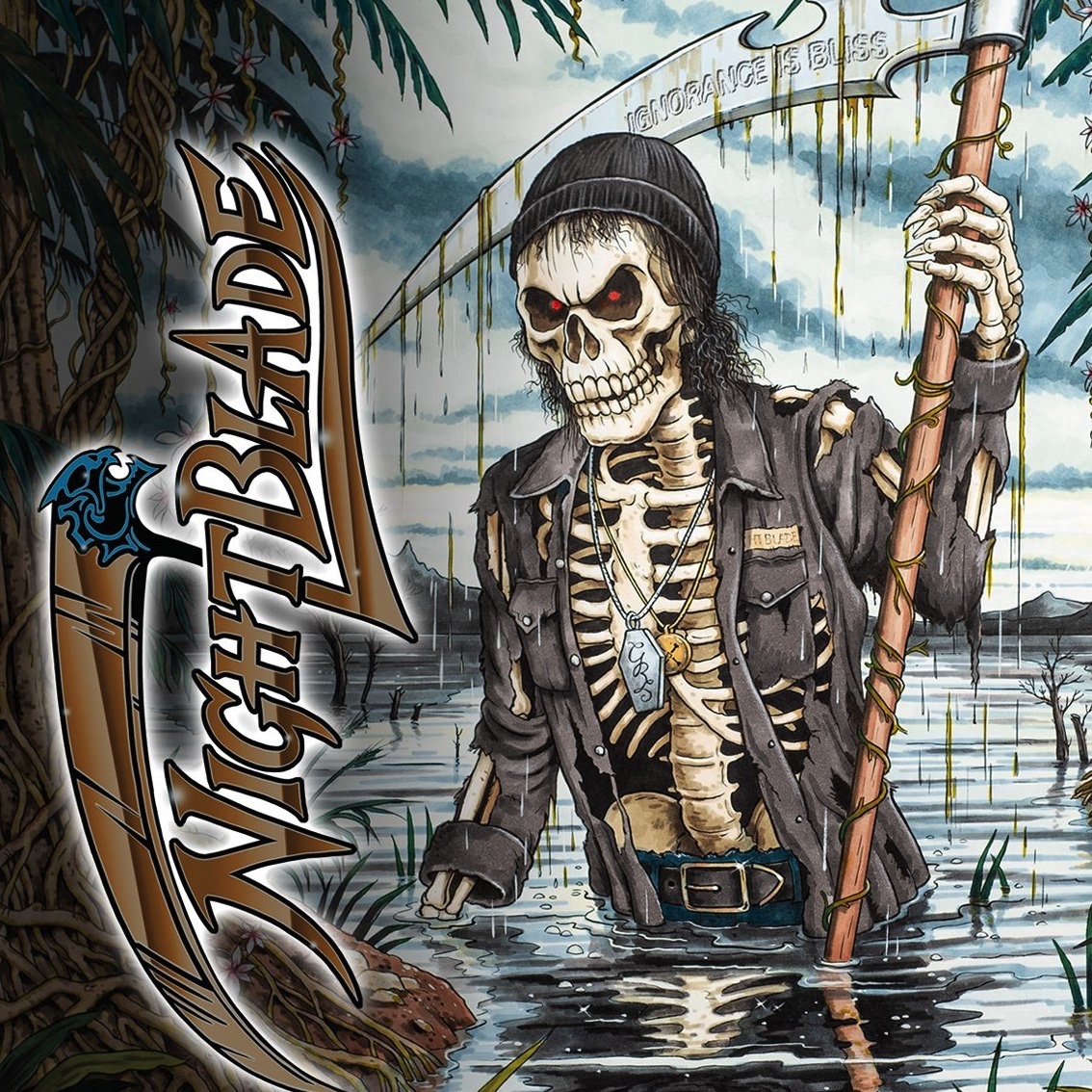 I have a wide choice of albums to review each month and tend to pick those that stand out a little. So I decided to check out Nightblade’s latest, purely after listening to the first track and thinking this is worthy of a write up. I thought my research of the band would lead me to foreign parts, as their sound appeared to be of European descent. They certainly looked like metal warriors of Viking origin. So what a surprise to learn, not only are they a local band to me, but I must have seen them supporting Snakecharmer in Kidderminster Town Hall about 5 years ago. Apologies Nightblade, the title didn’t register, however I do remember being there. I blame old age and too much apple juice! Of course not long after that gig, the band started a 4 year hiatus, breaking up in 2016 to pursue other projects. Now back with a vengeance and a third album, which the critics have already been praising, it’s time to re-discover these guys.

The strident tones of the title track, herald an intro that sounds like a war party on the march. Mark Crosby has a very distinctive and unique voice, in fact the whole concept of this song, makes you sit up and take notice straight away. You are put in an uneasy but invigorating, almost enrapturing sense of something different. ’Steering The Wheel’ has a simple low repetitive riff, it’s rock-a-billy with an industrial attitude. The guitar steps in to break down and enrich it with twang and even shredding towards the end and Mark assists with his pure and balanced style. The first single off the album ‘Only You’ has featured on some major radio stations, such is the effect Nightblade are having on those who hear them. It has a rigid bass line to give it a rock solid foundation and soothing vocals that also stretch Mark to the limit. Very commercial sounding, it bounces and collides in an easy going and carefree manner, very adhesive.

’Never Take For Granted’ is a different kettle of fish from its predecessor, diving into gentle waves with melancholy, it only comes up for air mid way, when it breaks with the soft hammering of guitar. Complex and meaningful, you are taken on a drifting raft, into the unknown, a truly seductive song. Again, the mood changes dramatically with the next track ‘What If’. After the engine revving intro there is a pile of majestic bass from Tim Cutcliffe and more distant vocals are mantra like in delivery. Alternative rock with a continuous flow, Nightblade have something quite original here. ‘Further From The Truth’ is more rapid, angry and unsettling at times but having a fantastic rhythm. Which is what I like about this band, the uneasy and often unbalanced, awkward vibes that go against the grain, but at the same time are melodic and entrancing. ‘Take Me As I Am’ is a strumming delight, with lower tones and could almost be classed as a love song. Melody and gutsy guitar fusing it all together, what more could you ask for ?

Eighth track ‘Immune To It All’ has a guitar intro that chimes like a peal of bells, it’s so clear. The thundering drums from Rich Lawley add a steady rhythm, his playing has been on the nail all through the album, to be honest. Quite a raunchy little rocker, it throbs with energy right up to the end and the amazing guitar work from Sam Morse appears effortless. The penultimate song is ‘Find The Strength Within’ a meaningful piece, it grows into a bit of an epic, but holds on to the subject matter without breaking into a sweat. Final song is entitled ’Stop’ and is a little gem. It’s a decent upbeat rocker with a dirty riff and hot rod pace. The production comes through true on this as well, all down to the guys at The Old Smithy Studios in Kempsey, Worcester.

The band list and liken themselves to Shinedown and Alterbridge and I get that in some respect, but if the Smiths had been an industrial metal band, they would have sounded like Nightblade. Being from the Kidderminster and Stourbridge parts of the West Midlands, I think the influences must be a mixture of bands like The Wonder Stuff, Neds Atomic Dustbin and Diamond Head. Also playing at J.B’s Dudley and The Boars Head in Kidderminster, mixed with the waters of the Stour, has left an indelible mark on these four guys. Brewed and crafted in my neck of the woods, I am no longer blissfully ignorant of the incredible Nightblade and look forward to hearing more of their work and of course, seeing them play live somewhere next year.

Do we listen to music to relax and unwind? Yes, but not always, we also like to experience uplifting ideas, reach into the unknown, be enthralled and in awe of what we hear and for me Nightblade have achieved that. Right at the end of 2020, ‘Ignorance Is Bliss’ has swept into my top albums of the year.

‘Melody and gutsy guitar fusing it all together, what more could you ask for ?’

Highlights  – Steering The Wheel, Only You, Further From The Truth, Stop.

Go to the social pages below to learn more about Nightblade and how to get a copy of the album , Merchandise etc.