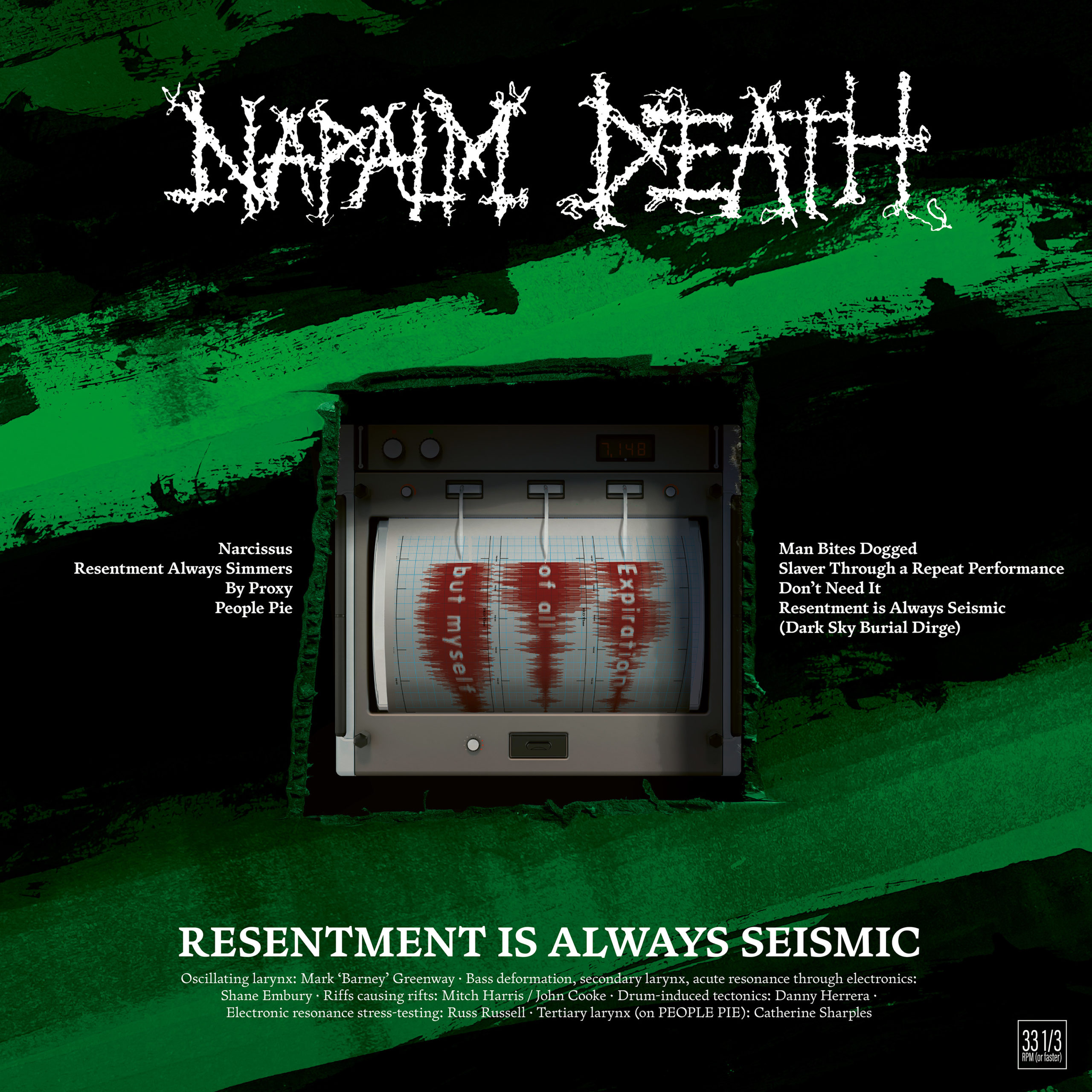 Napalm Death are one of the few extreme metal band who have been consistently excellent over a nearly forty year career, without needing to tone down their aggression to keep up. They’ve also continued to experiment into their later years making their more recent releases far more interesting than their early classics- there is certainly a debate to be had about whether recent albums like Utilitarian are better than classics like From Enslavement To Obliteration and I won’t be engaging in that, but it’s undeniable that more recent albums have more going on. ND’s latest release, Resentment is Always Seismic- A Final Throw of Throes, is billed as a mini-album serving as an accompaniment to Throes of Joy in the Jaws of Defeatism. It’s a Napalm Death record, so of course it’s good, but just how good?

It says a lot about me as a person that the second I heard the tone of Shane Embury’s bass at the start of opening track Narcissus, I was grinning like an idiot. It’s filthy, disgusting, rancid. It’s perfect. The rest of the track is a mid paced, groovy affair that harks back to ND’s roots in hardcore punk and even has a turn of pace that allows the band to blast in the way that only they can. If you’re not a fan of their more experimental turns in recent years, this is the track for you. Especially that ridiculously muscular chug-fest towards the end of the song.

From here the rest of the record gets more expansive, but no less extreme, Barney Greenway’s signature not-quite-melodic clean vocals wail away over the slow build and release of Resentment Always Simmers. By Proxy harks back to the classic Napalm Death, before dying out on a strangled scream and fading into the absurdly funky bassline of standout track People Pie. People Pie is what Faith No More would sound like if they were far more evil. I never thought I’d hear a grindcore band bring in a gospel choir to make an already sticky chorus truly inescapable, but that’s what we get here, and it’s genius. Truly a delight.

By comparison the rest of the record is business as usual. Even now, there is no joy quite like hearing Napalm Death blast away, and they absolutely deliver here. On the straightforward tracks they still manage to shift pace and rhythmic approach frequently enough to always keep the listener off guard and engaged. On Man Bites Dogged, it’s a masterclass for every grind band that came after, before it dissolves into a droning finale. The record is over too soon as Resentment is Always Seismic (Darksky Burial) brings post-metal sensibilities and glittering synths so build a haunting crescendo into oblivion. From the sheer violence of the proceeding tracks, it provides a moment of respite in which it recapitulates some themes from Resentment Always Simmers warping them unsettlingly. I’ve never heard a band in Napalm Death’s sphere of heavy music even attempt something like this. Somehow, they’re still pushing boundaries.

Once again Napalm Death have released a great record. It does lack a bit of variety compared to other recent albums they’ve put out, but the quality is still here and it has a few standout moments as good as anything they’ve released for at least the last decade. Napalm Death are still the kings of grindcore, long may they reign.

Resentment is Always Seismic- A Final Throw of Throes is out 11th February 2022 via Century Media, and can be purchased here.