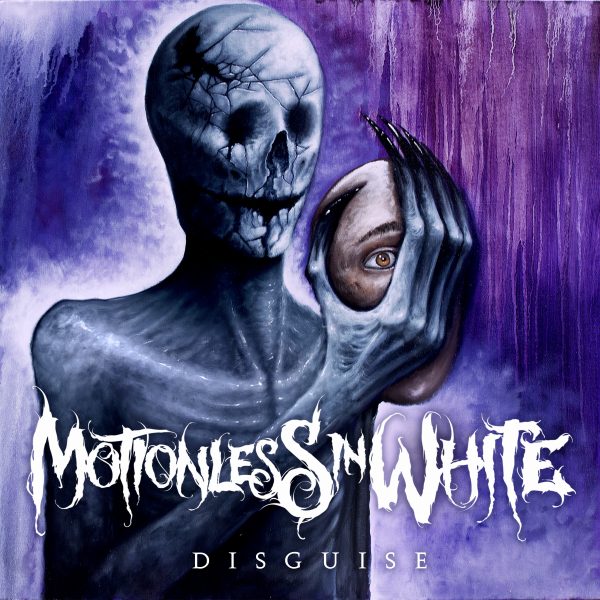 I’ll admit that I only really started paying attention to Motionless in White (MIW) when they released their third album, Reincarnate. I was never really into the emo-goth-horror vibe that they had going on, and while their imagery and lyrical tales were certainly powerful, the music had never really clicked with me until that point. So, anyone hoping for a complete panning of their fifth album, Disguise, because it ‘doesn’t sound like their old stuff’ may as well stop reading now.

That said, early fans of the band will be pleased to know that Disguise has several tracks that hark back to MIWs first couple of albums. “Undead Ahead 2: The Tale of the Midnight Ride” opens with crunching footsteps and the sound of a distressed horse, before the main riff thunders across your consciousness, supported by string sections and the kind of spooky noises made by ghosts on Scooby Doo. No one could accuse MIW of mellowing while listening to this: it’s one of the heaviest songs they’ve released, and Chris Motionless spits venom and anguish throughout. Fans of Ice Nine Kills recent horror-themed album should get on with this track very well. For those after a less sinister approach there is “Broadcasting from Beyond the Grave: Death Inc” which takes strong Rob Zombie vibes and creates a club-metal anthem for the ‘weirdos in your stereo’. Sure, the lyrics are a bit on the nose, and they say ‘f**k’ more than Corey Taylor in heat, but my inner teenager couldn’t help but get caught up in it. The heaviest trio of songs of the album is completed by “Thoughts and Prayers”, a no-nonsense pummelling that dispenses with the gothic/horror trimmings in favour of driving riffs and frantic double kick drumming, relying on harsh electronics and Chris Motionless’ grotesque delivery to keep the unsettling edge the band are known for.

Elsewhere on the album there is a comfortable and balanced mix of heavy and melodic tracks, although with a range of quality to match. The albums opening track, “Disguise” kicks off with the kind of riff that demands attention and balances a heavy sound with clean vocals perfectly. “Code” uses a similarly styled riff but takes the melodic aspect to the next level with an arena-size nu-metal chorus. The scream over the closing chords is one of the most emotionally charged moments on the album. In close second place for emotional stakes is “Another Life”, where the lyrics lament the harm caused to a significant other. Some of the lines are a little cheesy, but they are sung with conviction and that’s half the battle. Plus, they are far superior to some of the ludicrous lines uttered on the likes of “Brand New Numb” and “Legacy”, the latter of which sounds like a cast-off from recent Shinedown or Papa Roach albums. It’s cries of ‘black is the blood I will bleed’ will undoubtedly appeal to hardcore fans but the ham-fisted lyrics about ‘rising up’ with ‘thunder for a soundtrack’ are unsubtle in all the wrong ways (this isn’t Amon Amarth after all).

Disguise is probably the most well-rounded album that Motionless in White have made, covering everything from crushingly heavy tracks soaked in blood and anguish to empowering and uplifting anthems for societies outcasts. It is at these extremes that the band seem to work best, as the songs treading the middle ground are the ones that let the album down, lacking in any defining feature to make them as memorable as the rest. These are some of the best songs MIW have ever written, which makes Disguise one of their strongest albums, despite its shortcomings. It is just frustrating that it is lacking the final piece of the puzzle that will let Motionless in White make the jump to the arena sized band they seem to be on the verge of becoming.

Highlights: “Code”, “Thoughts and Prayers” and “Another Life”

Disguise is available from 7th June via Roadrunner Records and can be purchased here.