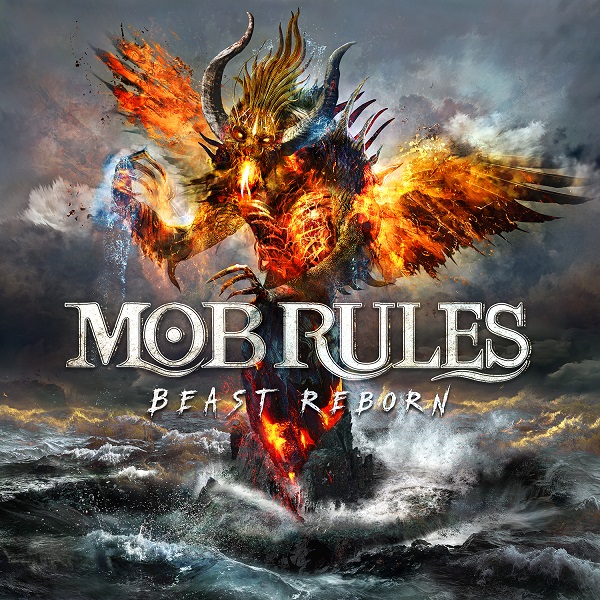 German power metal princes Mob Rules have had a steady and respectable career since their inception in 1994. Whilst they surfaced around the same time as the likes of Hammerfall, Sonata Arctica and Edguy, the German sextet never caught fire the way some of their more famous contemporaries did, instead occupying the second tier along with the likes of Freedom Call and Excalion. They have still achieved an admirable level of success though, with Beast Reborn marking their 24th year with their ninth full length album.

I’ve always identified Mob Rules as a band whose style falls definitively into the European power metal category, but it’s interesting to see how they don’t play up to a number of the tropes that many find typical of the genre. Listening through Beast Reborn, I was struck by the near absence of any double bass drumming, making any instances of its use all the more effective. The technique is common in groups where a fast tempo is a dominating factor, but Mob Rules prefer a more patient approach, with songs focussed on dense, melodic soundscapes rather than speed and riffs. They also elect to eschew soaring falsettos, another trademark of the power metal style. Klaus Dirks sticks to a comfortable mid range, choosing to let the intonation and cadence of his vocals do the work. His voice carries plenty of emotion and passion, and I’d take this sort of conviction over impressive vocal gymnastics that lack soul every time.

Beast Reborn lives and dies by the strength (or lack thereof) of the songwriting, and thankfully it’s mostly positive in that regard. I was particularly struck by how well the chorus hooks are integrated into the songs. Sometimes it’s obvious that songs are structured around building up to a catchy refrain (particularly in a genre such as this), with the rest of the track coming off as an afterthought. This isn’t the case on this album, and it’s clear that a lot of work has gone into making the music as rich and cohesive as possible. The choruses may not have as much impact because they don’t leap out as and grab you, but I think this works for the greater good, rendering every part of the songs as important as each other. The music here is memorable, but it takes a little longer for it all to sink in than it might normally do with more immediate acts.

After a brief introductory piece, the standard Euro power metal sound of lead single “Ghost of a Chance” and the more atmospheric, keyboard heavy “Shores Ahead” rev things up nicely, whetting the appetite without offering anything truly captivating. “Sinister Light” soon changes that, with its heavy, mid paced chug, wonderful dual harmonies and buoyant aura. The lush, layered vocals enhance this euphoric feel, much like Timo Kotipelto’s vocals in modern Stratovarius / Cain’s Offering material. “Traveller in Time” sets driving verses against a more pensive chorus, with the ultra catchy hooks of “Children’s Crusade”, reminiscent of Iron Maiden’s “Futureal”, offering one of the album’s highlights. “War of Currents” also channels Iron Maiden; the sparse, gradual build early in the track likely to draw parallels with “Seventh Son of a Seventh Son”. The song does move on to forge its own identity once the guitars kick in, one rich in bombastic grandeur and cinematic scope. The piano and orchestral accompaniments in the final minute are particularly wonderful, closing out a song that truly deserves to have the word ‘epic’ bestowed upon it.

There’s a slight decline in the second half of the record, but the quality is still pretty high overall. “The Explorer” has a slightly folky feel, “Revenant of the Sea” opts for a hard rocking stomp, whereas “Way Back Home” packs a punchy riff and more impressive key/guitar harmonies. “My Sobriety Mind”, is a fairly vapid piano ballad that ends the album with a relative whimper, although the explosive guitar solo and final chorus are pretty good; their effectiveness likely bolstered by the tepid five minutes that preceded them.

Mob Rules perhaps deserve better than what they have achieved in their career. The lack of a truly killer record has probably been their downfall; conversely, they have never released something that is truly awful or slips well below the standard that fans have come to expect. Beast Reborn is not a record that will change perceptions of the group, rather one that solidifies their status as one of the better groups in the power metal scene who never quite ascended to the top.

Beast Reborn is available on August 24th via SPV / Steamhammer, and can be purchased here.