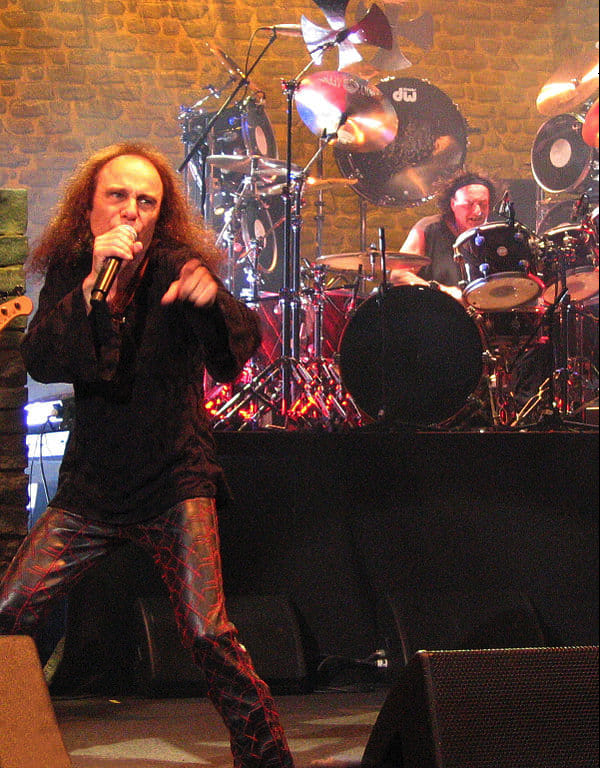 It’s hard to believe we’ve been without Ronnie James Dio for an entire decade. There’s not much I can say about him that’s already been said. His voice? His lyrics? His complete command of the stage, despite his short stature? For me personally, Ronnie’s death ten years today marked the first time that a musician that I was already listening to and looking up to had died. I’d been into Sabbath for just under a year, but had already delved a bit, coming across songs like Neon Knights and Heaven and Hell. I loved his voice, as a young teenager getting into metal for the first time. Dio’s singing was unmistakeable, powerful as a ton of bricks and chilling in all the right ways. I remember the shock to learn of his passing, showing the impact he had on me in only a few short months. His death reminds us all that as immortal and larger-than-life as rock stars seem, we’re all human. Since then, I discovered classic bands such as Dio and Rainbow (of course) and his real, extensive legacy. All metalheads worth their salt respect and love Ronnie James Dio, and at MMH Radio we put our heads together and picked a few of our all-time favourite songs that Ronnie makes an appearance on. Amy, Diane, Matthew and I wrote a bit about ten of them.

In no particular order…

An underrated epic on Side A of Mob Rules, it is testament to the brilliance of Ronnie James Dio – and indeed Sabbath – that this song isn’t often talked about. Dio’s voice is in fine form throughout, with his trademark wisdom scattered amongst the lyrics, as he warns us ‘Don’t live for pleasure, make life your treasure’. When he wails that ‘I can’t accept it anymore’, it’s hard not to feel something. Slow and brooding, this is one of Iommi’s best works, and you can hear how bands such as Iron Maiden and Metallica tried to emulate this style of grandiosity throughout the rest of the 80s.

Ronnie James Dio is in his element on Kill The King, able to reach higher notes in between the pulsating shredding from guitarist Ritchie Blackmore. Listening to it again as I write this, the balance was just right. Dio is given plenty of space to scream ’Danger, danger, the Queen’s about to kill’, referring to a game of chess. This song was used to open the live shows on many an occasion and apart from the title track, it was often the only one off the album that was played, which speaks volumes for its popularity with the band.

Dio continued to work with Blackmore and released the iconic masterpiece of Rainbow Rising in 1976, an album revered as a heavy metal classic and a key blueprint for the future birth of power metal. Opening track Tarot Woman is a magical journey from beginning to end. At six minutes long the song is a true testament to the indulgence of 70s rock. Yet what elevates it further is the sheer range and power of Dio’s voice which possesses a kind of hypnotism that even surpasses Tony Carey’s keyboards in that iconic intro build up.

In all but name Heaven & Hell was RJD’s third stint as vocalist of Black Sabbath. This excellent track is one worthy of the legacy of both Sabbath and Dio. From its clean intro that is almost like an inversion of Stairway to Heaven, to the body of the song supported by another brilliant, great Iommi riff, Dio’s voice easily matches the tone, turning on that perfect, evil inflection whenever the title is sung. Given that the track was released roughly a year before he passed, it’s astounding that Dio’s voice here was as good as anything he ever put out.

A bluesy ballad from the first Rainbow album that proved Ronnie could croon softly as well as let rip, Dio’s incredible synergy with Blackmore is proved once again. With more than a hint of the Hendrix classic Little Wing, this song is an emotional ending to the album’s Side One. Ronnie’s lyrics are bittersweet, as he wistfully sings ‘we believed we’d catch the rainbow‘ beneath understated, yet beautiful guitar licks from Ritchie that serve the song perfectly. Check out some of the amazing live videos of this song if you can – Rainbow made it sound even more epic in front of a crowd.

With its unmistakable intro, that sounds like an ‘Irish Jig’, Starstruck is probably one of the best tracks on Rainbow Rising. Dio’s vocals enter with those wondrous lyrics ‘If I’m high on a hill, she’d still been looking down at me’. I guess we have all sung along to it over the years. As Ritchie Blackmore adds sublime guitar, the song rushes along with a hook, ‘The Lady Starstruck, she’s nothing but bad luck’, that remains glorious to this day. I remember getting the album back in 1976 and watching them live on a couple of occasions, one positive thing about being of the older generation.

The powerful aura of Ronnie James Dio captivated a larger audience when he became the frontman of Ritchie Blackmore’s Rainbow. Man on the Silver Mountain was the band’s first single and solidified the essence of Dio’s performance. Religious themes carried by that instantly recognisable voice has sent a wave of shivers down the spines of a plethora of metalheads. To this day the song is a firm fan favourite and an indelible mark on Dio’s legacy, both metaphorically and literally through Man on the Silver Mountain being inscribed on Dio’s grave.

Is this the most iconic thing Blackmore did outside of Smoke on the Water? From the moment Cozy Powell’s drums introduce the song with instantly-recognisable fills, this song is a journey in every sense of the word. And who better to lead us on that journey than Ronnie James Dio himself? It takes us in and out of different emotions, telling a tale of wizards and enslavement, backed by the Munich Philharmonic Orchestra to give it a complete sense of majesty. Stargazer is an epic in every sense of the word. Needless to say, Ronnie’s powerful performance shows him at his best.

After fronting Rainbow and Black Sabbath, Dio would go on to release his debut solo album and his most iconic song to date. Holy Diver is the embodiment of heavy metal, a song that still drunkenly wails across the fields of Download Festival and beyond to this day. The track and album is deeply rooted in fantasy, allowing the listener to quite literally be transported from reality into a magical realm narrated by Dio. This is what arguably makes Ronnie James Dio so iconic and special to the metal community – he had a presence and voice that was so passionate and powerful that it’s hard to resist falling into the greatest form of escapism.

When our team made their lists of their favourite songs with a Dio performance, there was (only) one song we all agreed on. This, by default, makes this next tune MMH Radio’s best ever Ronnie James Dio track. Could it be any other…?

From Tony Iommi’s doomy intro to Geezer’s plodding bass, Ronnie sings us a song – a hell of a song. It eventually builds up in tempo and volume, controlled expertly by Bill Ward, before exploding into a closing section that incites pure, blissful euphoria. With one of Ronnie’s most iconic lines, that ‘the world is full of kings and queens, who blind your eyes and steal your dreams’, Heaven and Hell is thought-provoking, a lyrical career highlight for Dio, as well as being bloody brilliant. This song could stretch well into double figure minutes when played live, in essentially every Dio-era Sabbath setlist. When Iommi, Geezer and Vinny Appice reunited with Ronnie in 2006, they chose this song to name their new band after. It’s hard to pick a definitive Dio track, but if you were pushed, it couldn’t really be anything else, could it?

Thanks to Amy, Diane and Matthew for writing as well!