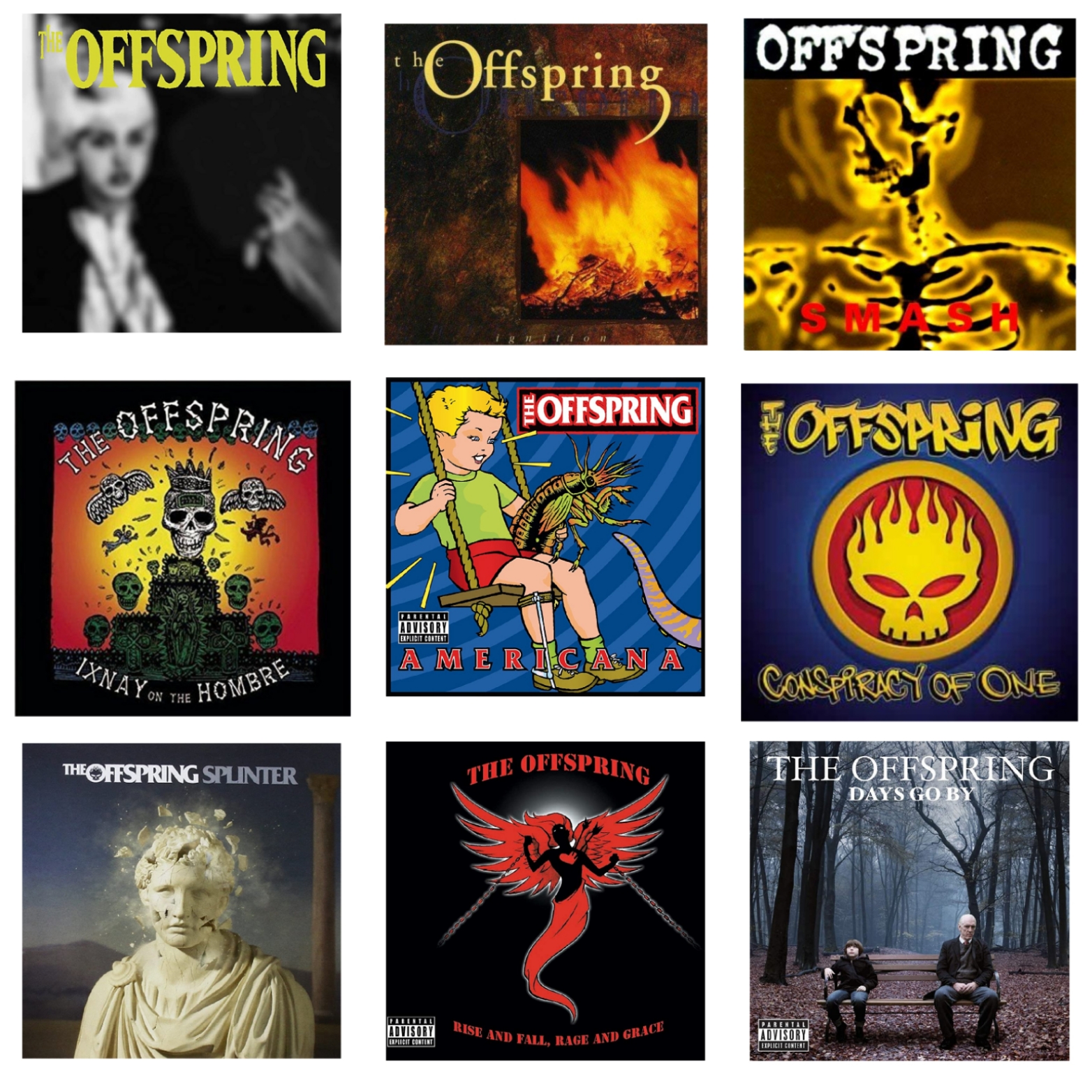 The Offspring, are they a punk band? A pop band? A pop punk band?
They have been called many things over the years, they have shone in the praise and weathered the storms and calls of sellout to still be here 35 years into their career.
We cast an eye over their 9 studio albums and placed them into an order, to find out where we placed them, read on.

9. Americana
Now this isn’t a hipster backlash or sellout accusation.
This album is bottom of the pile because it isn’t very good.
Despite the doors it opened due to the sales it generated “Pretty Fly (for a white guy)” is at best a quirky gimmick, but at it’s core it’s an annoying badly written bit of social commentary. If that was the key that opened the gate to a wonderful punk rock world inside then it could be forgiven, but it wasn’t, the majority of the rest of the album was also poor and marred by a terribly flat guitar sound and some boring songs. Yes the title track is amazing, “The Kids Aren’t Alright” was a fantastic follow up single but even if we add in the silly “Walla Walla” and light pop fun of “Why Don’t You Get a Job” we are still only at 4 decent songs from a 14 track album!

8. Days Go By
As The Offspring have matured so has their sound. Some fans have lost interest as they have drifted away from punk and dipped their toes into a little rock from time to time.
Depending on how you view this evolution will drastically effect how much you enjoy their ninth effort. For me the rock elements were welcome on Rise and Fall , but this one it missed more than it hit, has a truly ghastly gimmick single “Cruisin California”, yes I know it’s supposed to be fun, but it isn’t, and sadly the high point is the needless reworking of “Dirty Magic” from Ignition.
It’s this combination of factors that have left it sitting quite a bit adrift from the rest of the bands catalogue.

7. Conspiracy of One
This album had the unenviable task of following Americana in that whichever way they chose to roll they stood a strong chance of irking a huge part of their audience. Do they continue down the same road as Americana and lose all their core fans but keep the new followers who may be flash in the pan pop fans? Or potentially push away their new fans that have taken them to the big time and bite the hand that feeds with a punk album?
It would appear that The Offspring found a third option, and with Conspiracy they made a punk album that was clean and shiny and catchy and laden with poptastic choons. Yes choons.
This album is unapologetically brilliant.
From the confident swagger of “Come Out Swinging” through the brilliant singles “Want You Bad” and ‘Million Miles Away” before they drop some aggressive catchiness with “Damnit I Changed Again” and “Livin In Chaos” with arguably one of Dexter’s best vocal performances before the skanky ska punk swagger of “One Fine Day” leads into the furious final quarter with the atmospheric “Vultures” which is often overlooked the album is stacked with bangers. The only downside is the truly awful “Original Prankster” with Redman, which is beyond belief with its levels of tripe. It was obviously a shameless cash in lead single with aspirations of capturing the same vibes as “Pretty Fly”, except it’s somehow worse. But barring that, the album is pretty flawless.

6. Splinter
Short and direct to the point, after the pop styled and sounding vibes of Americana and the poor sales of Conspiracy, this album had the task of getting the original fans back, and it’s an amazing success.
They lead with the skanking “Hit That”, brilliant song, grabs the attention and manages to be the right side of cheeky and quirky whilst also insanely catchy.
It was a bit misleading as the majority of the album is vintage The Offspring punk, fast, furious, loaded with yeahs and whoa ohs in the choruses and most of the songs failing to get past the 3 minute mark. There was still space for skanking oddness and fun on “Spare Me The Details” and “Worst Hangover Ever” that reminded us that there’s more to The Offspring than just 3 chords!
An overlooked classic.

5. Rise and Fall, Rage and Grace
The Offsprings Load.
It’s that simple. This is the sound of a band growing up.
They are still making points with their music, but they are resisting the urge to smash you over the head with it, some of it is a little more subtle. The pace is still there in places, but the majority of the album grooves more than it bangs. “Hammerhead” “You’re Gonna Go Far Kid” are exceptional mid paced rockers, they bring some fire and punch with “Stuff Is Messed Up” , “Trust In You” and “Takes Me Nowhere” but it’s on the two slower numbers “A lot Like Me” and “Kristy Are You Doing Okay?” that highlight the changes in the band, and their growing level of confidence. The Offspring have always had an element of doing things their own way and have dabbled in ballady songs in the past, but they go full acoustic with these and no one was expecting it. For me I think they are brilliant and help to break up the album and add some light and shade. Others see sell out and cash grab. At this stage in their career I think the cash grab need is long gone and they are making the music they want, how they want, and it doesn’t get much more punk than that.

4. The Offspring
Recorded late in the 80s when the band were still in their youth, this is an album propelled by energy and enthusiasm, despite a healthy chunk of cynicism in the lyrics.
Musically it’s their most “punk” offering. The political diatribes are more international as they take aim at the conflicts the United States were in the at time.
It’s not the easiest listen, Dexter doesn’t appear to have settled into his comfortable rasp just yet and hits a few odd notes during the runtime of the album. It’s also the most abrasive, the guitars in particular sounding very harsh and aggressive, they over power almost everything else on the album, most notably the bass. This album needs reworking almost as much as “…and justice for all”!
That said, it’s still armed with some of their best tunes, “Beheaded” all about chopping off heads, “Tehran” all about the war, “Blackball” all about exclusion, it’s a great collection without a single duffer in view.

3. Ixnay On The Hombre
Having to follow Smash wasn’t going to be easy, as it really was an appropriate title for the album, this was their final album for Epitaph in Europe, their first for Columbia in the States saw them carry on as if nothing had happened, and in all honesty it’s probably the best thing they could have done, as they ducked all the pressure and made another storming album.
But with a few slight tweeks to the tried and tested Offspring formula.
The short, sharp opener was present, “Meaning Of Life”
Swaggering story telling “Me and My Old Lady”
Skanky ska punk “Don’t Pick It Up”
Hectic catchy punk fun “All I Want” and “Cool To Hate”
But they slowed down for a couple, and they proved to be both amazing and easily two of the best songs in The Offspring arsenal, “Gone Away” with its emotive lyrics and huge chorus was an obvious and wise single choice. And the penultimate song “Amazed” has a slow build leading to a huge riff coupled with Dexter’s finest vocal performance on any of their albums to my ears with a chorus the size of Russia. It seems odd to me that whenever the best bits of this band are discussed this song is always missed, it’s ridiculous, it’s a monster song.
It’s this combination of perfect songs that display so many different aspects of the bands writing styles that elevate this album to third on my list.

2. Smash
I don’t think there has ever been a more apt title for an album.
This album really was a huge smash for both Epitaph Records and The Offspring as it currently still sits as the largest selling album on an independent label.
And for good reason.
It’s a fantastic punk rock album.
Brilliant production enables the band to walk the fine line between rough, buzzing guitars and thundering drums with enough clarity to let the melodies in the vocals carry through the songs. It’s fast, it’s punchy, it’s fun in places too. It is the sound of “Nitro(Youth Energy)” as exemplified by the opener as pick slides and drums clatter in before the main riff kicks and you’re taken away for 40 minutes you’ll never forget.
Most bands with a 30 year plus career may pull off 4 or 5 classic songs across their work to support them, with “Gotta Get Away” and it’s huge groove, “Come Out and Play” with its socially conscious lyrics tied to an amazing quirky riff and “Self Esteem” with its Nirvana-esque riff and story of a chap desperate to keep his other half happy despite her treating him like a doormat. The Offspring wrote a huge chunk of their Greatest Hits in just one album. And that’s before we get to the noisy, furious punk numbers in the second half “It’ll Be A Long Time”, “Killboy Powerhead” , “So Alone”, “Not The One” and the amazing, closing title track.
Folks often write this band off as pop punk band, they really should listen to the second half of this album to see that these chaps were exactly what the punk scene needed in 1994, with this album they injected a much needed lease of life into a struggling scene.

1. Ignition
The scene setter.
This album is a flawed masterpiece. This album sets out all the ideas that the following album Smash would nail.
And yet here it is, above it as number one on my list.
Purely because it’s the one I listen to the most, and that has to be the reason any album is anyone’s favourite.
I can appreciate that Smash and Ignition are remarkably similar and that Smash is generally held in higher esteem for good reason.
It sounds better, this album has a muddier mix with more low end groove which I prefer.
The guitars are also fuzzier on this album, again less clarity, but again I prefer the rougher mix.
Dexter’s vocals sound harsher and the gang vocals sound bigger, again which I prefer.
Opening with the frantic “Session” armed with 3 chords and gang vocals ahoy they set their stall up bright and early, before you know it “Kick Him When He’s Down” and “Take It Like A Man” have changed the pace, added some groove and make the album feel heavier before it slows down for the hypnotic and insanely catchy “Dirty Magic” which tells a similar story to “Self Esteem”.
These all build up to a hectic and frantic second half where the pace goes through the roof with “Hypodermic”, “Burn It Up” and the closing 1,2 of “Nothing From Something” and “Forever and a Day”.
The lyrics in the second half are barbed with social commentary and cynicism exemplified in a scathing attack on the police during “L.A.P.D.”
It’s an utterly brilliant album that’s had to live in the shadow of Smash for far too long.

Ben Jekyll hosts Dancing With The Dead on a Saturday night from 8-10pm UK time.
Drop a request or submit a track for airplay to benjekyll@mmhradio.co.uk