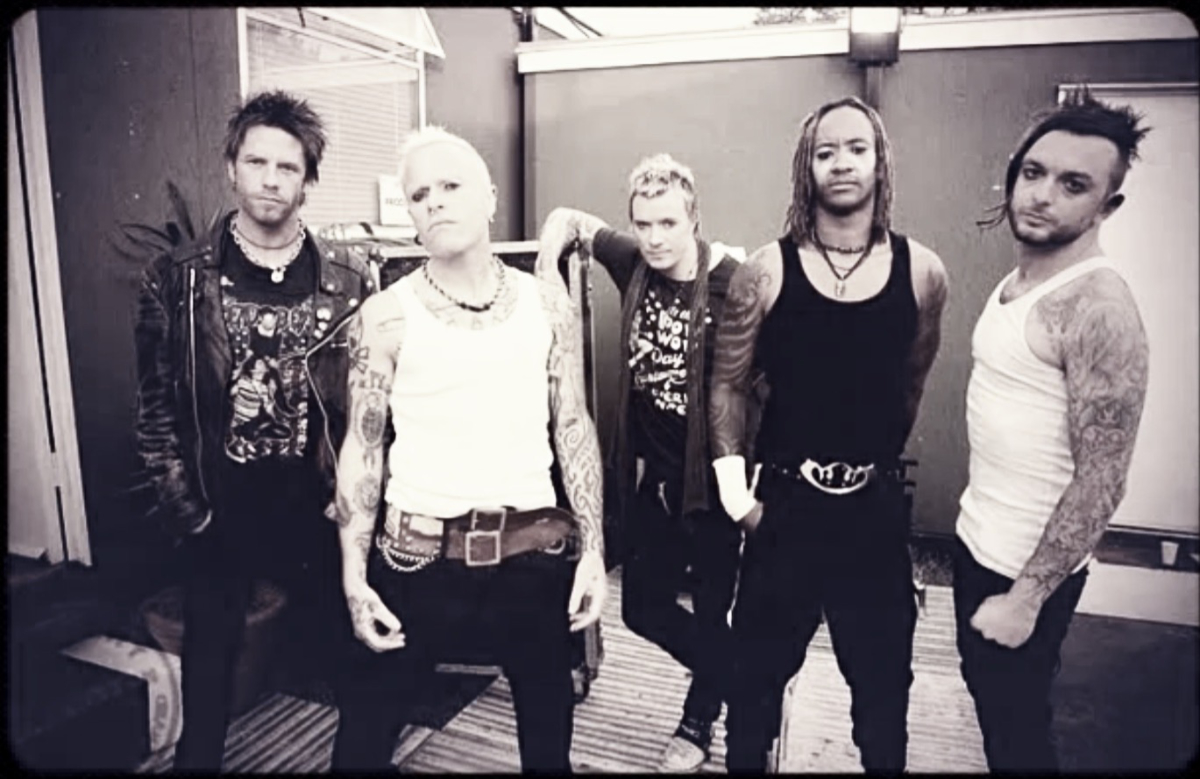 Following on from my Download Festival special of The Rock N Roll Penitentiary, of which the podcast is now available to download, Rob Holliday (who I had previously spoke to for the review I did on his band Sulpher, which you can read here) spoke to me about his experiences at Download Festival. As you may know, not only playing in Sulpher, Rob has played guitar and/or bass with Marilyn Manson, Gary Numan and The Prodigy. And it’s The Prodigy which we focus on as Rob shares his memories of the three appearances he made with the Essex electronica band.

We were all pretty chilled out upon arrival backstage, we had just found out Metallica were doin’ a surprise appearance so I myself was pretty excited about that !!!
With the Prodigy, it was always a kind of ‘ the calm before the storm ‘ situation before every show, this however did feel slightly different , there was an edginess we could kind of see it in each others eyes.

We all did our warm ups quietly in our own individual way and gearing up in the dressing room you could feel the electricity and I think all 5 of us knew it was gonna kick off (we still had Keiron Pepper, the original drummer at this time)…and it did !

From the second we got onstage it was total chaos. The volume was insane and the heat from the audience was like we were all trapped in some sort of mass steam room or what I imagine a house on fire to be like.

All I remember was feeling like I was going to pass out and watching people clambering up the tent poles inside and climbing up into the roof
It was just going off like never before.Seeing this kind of reaction from the stage was totally intense, and when the audience is going off like that it just fired us up onstage even more, it seems like some sort of audience band fight to see who can out do the other. It was very special Show

The 2009 second stage show was pretty amazing too! Once again we knew it would be chaos.
I’ve done download 4 times in total, 3 times with The Prodigy and once with Marilyn Manson and every time was absolutely mega !!!!!
Every Prodigy show is pure power and raw energy so I mean all the shows are intense in their own way.

I love slipknot and love their energy onstage too man – so for us it was a cool day getting to see those guys smash it the way they do . For me personally I had a pretty crazy and fraught show – for some reason my guitar tech had fucked up his setlist and was handing me guitars tuned for the wrong song as Liam had changed the setlist right before we went onstage, and didn’t realise till the intros to the songs were starting, I was totally confused I was losing my mind and just throwing guitars back at my tech.

He finally got handed the correct setlist, around 3 songs in, but by then I had already smashed a whole ton of my stuff lol , including a guitar that was locked inside a case and not even being used!!! lol
I mean when your up there onstage, you’re not even thinking straight … you’re in the moment and your in a totally different mindset. I remember locking eyes with the bands manager John and somehow he telepathically knew I was heading for the guitar that was up to now …. safely locked inside its velvety coffin. (aka guitar case). I guess after that many years you kind of instinctively know what some one is thinking, and what someone could potentially do… We kind of did a race towards it like an ice hockey body check about to happen I got there just before he did and got the thing out and totaled it – the look of horror on the faces of some friends and family at the side of the stage was priceless !

It was an honour to be able to play such a killer festival that has such legends as Black Sabbath and so many other bands playing, I grew up listening to all those bands man, its incredible to have shared the stage with so many amazing bands.

Promoters and agents wanna throw the best party for the audience that they can and changing things up a little with a diverse range of acts is always good I think.
The weather was horrendous and it was mentioned that the show may be called off, which was pretty shit, we pulled in and it was torrential rain and it was a total mudpit.

We had all heard talk backstage of it being called off but at no point did the band ever think it wasn’t going to happen – The Prodigy have the mentality that nothing stops a show simple as that, – and that’s the way it should be !!!

The Prodigy connect with rock and metal Audiences worldwide so we as always were so up for this show and the connection between myself, Liam, Maxim, Keith and Leo and former drummer Keiron too ….. is pretty incredible – there was just a chemistry that’s hard to find and the way that line up gelled back then was cool as fuck….And the fans can see that intensity and aggression and they know its real and they can see the emotion on that stage – they see through bullshit and fakeness in a second – The Prodigy are real and they mean it – Every last minute of it, and don’t ever dare to think anything different.

I’ve got amazing memories and that will never go away, It is a massive part of my life and a massive thrill to be part of for sure – its every kids dream in his bedroom playing guitar or bass or drums or whatever and to get to that kind of level, so its pretty much like a dream come true to be up there with an act like The Prodigy.

Anyway, the show went ahead and the pyro’s were goin’ off and it was total mud pit madness the rain was blowing in on the stage and we were all soaked with the sweat and rain
The crowd was as always incredible!

Experiences and photos shared by kind permission of Rob Holliday.