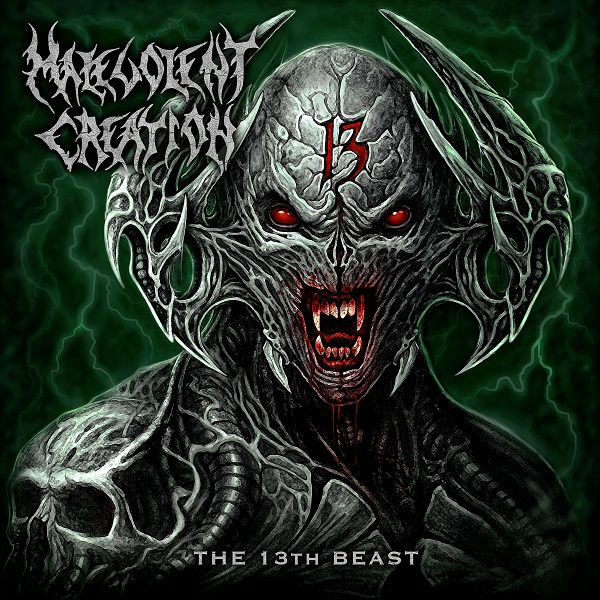 Malevolent Creation have had to suffer their share of trials and tribulations during their 30 year career, the most recent of which was a mix of the professional (the mass dissolution of the group’s line up in 2016) and personal (the death of much loved former frontman Brett Hoffman, who died of colon cancer in 2018). Phil Fasciana has been the sole individual who has powered the band through these adversities, and once again he has ensured they live to fight another day as he leads his latest charges through The 13th Beast.

The album sees the introduction of a whole new line up, but the chemistry established belies the short time the four members have been together. Right from the off the group settles into a comfortable groove and steamrolls ahead with ten slabs of uncompromising, old school death metal. Each song is a barrage of unrelenting riffery, propelled by the tight rhythm section of Josh Gibbs (bass) and Philip Cancilla (drums). The production is massive, with a crystal clear guitar tone that gives the riffs plenty of clarity whilst still maintaining the heaviness. The drums are also a dream, packing a wallop without an overly artificial triggered kick to be heard, with the low end rounded out by a weighty bass tone. It all merges together for a monolithic aural force, and Lee Wollenschlaeger does his part to match with his commendable combo of barks, bellows and grunts.

The greatest strength of The 13th Beast is also its greatest weakness. It’s a very focussed record, and sets out to consistently beat the listener into submission. This can grow tiring, with the rinse and repeat method inevitably leading to tedium as songs start to sound interchangeable as the album wears on. There are a few tracks that do stand out, but they suffer from being stuck in a sea of monotony. “Mandatory Butchery” is one of the strongest numbers, rattling along at full throttle with a savage, thrash infused bloodthirst, pausing to bask in a sadistic atmosphere in the slower interlude. This sadism is also rife in the manic frenzy of “Knife at Hand”, which is as close to anthemic as the album gets, whilst “The Beast Awakens” is pure death metal brilliance, with a procession of riffs that just refuses to let up. The shifting riff sets in “Born of Pain” do enough to pique interest, but the song runs a minute or so too long, which, in combination with the cumbersome breakdown, does it no favours. It’s not an isolated case either, with a handful of other songs also in need of a slight trim.

The 13th Beast is an admirable effort in light of the circumstances that have surrounded the group in the past few years. It’s a solid, old school death metal record with a lot of energy and masses of fantastic riffs. There’s still room for this line up to improve, but so as long as you don’t go in expecting something incredible, this will likely be a treat for your ears.

The 13th Beast is available on 18th January via Century Media Records, and can be purchased here.