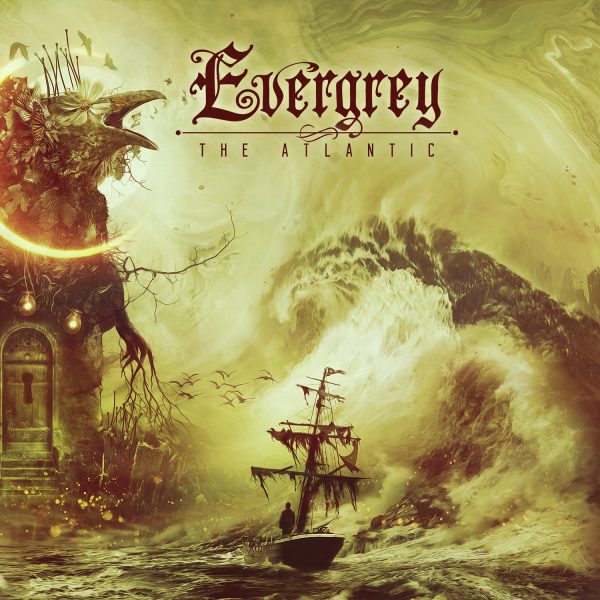 Evergrey, for those not already in the know, are one of Sweden’s most prominent progressive metal exports. Never one to conform to typical music industry confinements, they regularly release singles well over the five-minute mark, disregarding the need to pander to the supposed short attention span of the modern music fan. Their music videos are often ambitious monochromatic affairs, all slow motion and grand mountain scenery, you know the drill. Their upcoming release, The Atlantic, concludes their Hymns for the Broken trilogy: a run of albums completed by 2014s album of the same name and 2016s The Storm Within. Not that you would have any idea of that if the band didn’t tell you. Unless albums form a continuation of a specific story or musical theme then things that connect them as a set are often just notional embellishments for the die-hard fans to hunt down. Frontman Tom S. Englund says the album is “about relationships, beauty and darkness, about fortune and grief, about love, hate, despair, joy and everything connected with it”. So yes, a suitably wide net of influence that ultimately means nothing. It is the musical equivalent of a politician answering a question with a five-minute monologue that says nothing of any meaning. Yet, it is such vagueness that allows music, and specifically lyrics, to reach so many people: everyone can take a different meaning from them and so create their own personal connection. Or it could just be pretentious twaddle intended to make ambitious music reach ever more lofty heights. Again, all down to personal interpretation.

Moving onto the matter at hand. When opening track A Silent Arc kicked in I had to do a double take and check I hadn’t picked up someone like Behemoth by mistake. Such a dark and bludgeoning opening riff I was not expecting. The intensity is only let off once we reach the chorus which holds the song back with a slightly underwhelming vocal melody. This is quickly forgotten later when a climactic guitar solo enters with a searing opening couple of notes that could shift mountains. The guitars really don’t ever let up from here on in. There is a slight over-reliance on single note riffs on a couple of tracks, with the mid-tempo drag of The End of Silence and The Beacon quickly becoming tiresome. The riff to A Secret Atlantic is particularly disappointing: it takes a lot for a song with this kind of pace and energy to become monotonous, but the single note chugging does the trick. These few instances aside, when this simpler approach works it really works well, and it is the heavy grooves of songs like Weightless and Currents that show how Evergrey are making the less-is-more approach work beautifully. The thick and heavy rhythm section really seals the deal, with the djenty rhythms of This Ocean really making you want to put that subwoofer you bought for Christmas to the test.

As for the aforementioned themes of life, love, despair etc the lyrics used to convey them are just like said themes: vague and forgettable. They are delivered with emotion and conviction by Englund and yes, they sound dark, they sound despairing, they sound like they should be delivered in the driving rain from the prow of an ancient ship destined never to see shore again. So why could they not be sold to us as such? Selling your themes as about ‘the adventure of life’ is cliched and meaningless, even if it does come from a place of good intentions and a deep well of personal experience. I know that many people will disagree with this. What everyone can agree with is that the catching melodies and emotional drive of songs like Departure and Currents makes the lyrics sound damn good. It makes a great change to hear a singer who doesn’t go hell for leather for the whole album run time and it makes the moments where Englund does push himself that bit more memorable. He isn’t the most diverse of singers and is clearly comfortable in his middle range, but it has worked for Evergrey this long so why would they change now?

My overall impression of The Atlantic is that it is much like the ocean from which it takes its name. There are moments of beauty and intensity scattered throughout, but there isn’t much to distinguish one part from another. Most tracks follow a similar mid-tempo and melodic formula (ie, going for that dark yet beautifully haunting vibe) and, while this is a formula Evergrey have absolutely nailed, it does mean some songs lose a bit of heft when you have already heard similar. The songs that are good are immense, but there are some that sound like a thematic idea was stretched just that bit too far. That doesn’t make The Atlantic a bad album, it just means it never quite teeters over the edge from good to great.

The Atlantic is released on 25th January 2019 via AFM Records and can be purchased here.