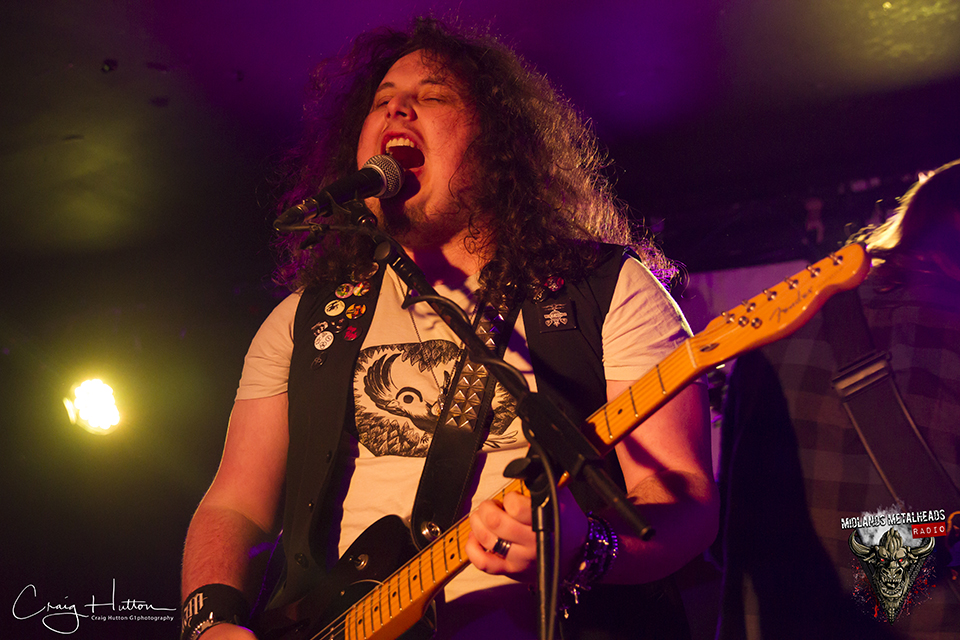 Twisted Illusion are a band looking to go from strength to strength.  Having snared a spot at Bloodstock Festival last year, it would be interesting to see where this experience and potential has led to at this point.

The gig kicked off with band Midnight Prophecy, a Liverpool based band with a classic heavy metal sound.  Now I wasn’t alive at the time, but I imagine this is what the 80’s sounded like.  The British metal guitar tones backed up by an emphatic, high-energy performance by drummer Sam Caldwell were the perfect foundation.  However, perhaps most impressive, was the strength and tone of the vocals provided by Craig Cairns, which can easily be compared to some of the greats.

The main support was provided by Sertraline, who are soon to embark on a UK and EU Tour.  While the other bands on the bill are very much reminiscent, Sertraline are bang up to date with their cool American style metal.  They clearly love a good breakdown in their songs which is bound to get younger crowds head-banging, although perhaps this wasn’t the right audience on the night.  The rhythm section were strong and tight with bassist, Hendo, often taking centre stage throughout the performance.  The guitars combined really nicely and the solo sections cut through the mix beautifully.  The vocals, provided by Lizzie, were very strong too and her personality came across in her performance.  The clean vocal was very good, however the depth and grit in the screams was highly impressive.  The transitions between clean and scream vocals could perhaps be smoother as a pause to prepare for the change to the scream vocal was often noticeable and a little work on microphone technique may also be advised, however, these are minor things which didn’t detract from what was a great performance.  I only wish their set was longer!

When Twisted Illusion came to the stage, it wasn’t very long before you realised exactly what the band are about.  The big personality of frontman Matt Jones gives an air of confidence which is not misplaced.  The mix of gritty powerful vocals in the lower range and well-controlled, softer higher range balances beautifully.  The technical ability of all the musicians is abundantly clear from the start, with the songs well-composed and flowing.  They also tick more of the classic prog boxes with various time signatures and long instrumental passages.  I suppose theres a reason, while many adjectives can be used to describe fans of rock music, prog fans can best be described as connoisseurs.  The tracks are composed to display a high level of musicianship, which is appreciated by those listening.

While recording their double album,  the rhythm section left and replacements were found, only for them to return at a later date.  However some tracks on the new album maintain the stand-in drummer and bassist.  Now most bands would ask the original musicians to learn the tracks for playing on tour, after all it makes financial sense.  However, in a fit of loyalty, all the musicians were taken on tour and sure enough, before the longest track of the set, there was a switch of personnel.  It is the first time I have encountered such an event and it gave me a new level of respect for the band.  During this twenty minute song though, the most impressive part was the vocal of main bassist Mark Wagstaff, who returned to take the lead.  His tone was soft and haunting, further enhanced by good use of delay and reverb effects which fit perfectly with the music.  The last four minutes of the track were a constant and seemingly never-ending build, which somehow managed to continue to increase in intensity and kept the audience hooked.

I was also nice to see an emotional dedication to Matt Jones’ newly discovered brothers who were in attendance for the performance.  The emotion also continued later with charity single Molly’s Smile.  New track No Compromise is likely to be a crowd favourite as it has a very classic rock feel and easy to pick up, catchy chorus.

Perhaps the only disappointing thing about the show was the time-keeping.  The support bands had relatively short sets, which allowed Twisted Illusion to have much longer on stage.  After their first big finish they played a three track encore, which is a bonus for those who really don’t want the gig to end.  However, there was time left and so they played another track.  It didn’t have the big impact of the earlier tracks so ended on a slight lull.  The above could be solved with access to the time on stage.  Adding songs earlier in the set would ensure the desired finish. That being said, the musicianship throughout was flawless.

With the emergence of prog in the 70’s, it sadly won’t be too long until the originals will be all but gone, however, fear not!  Twisted Illusion have captured the essence of prog to ensure it remains an art form you can enjoy live for the foreseeable future.