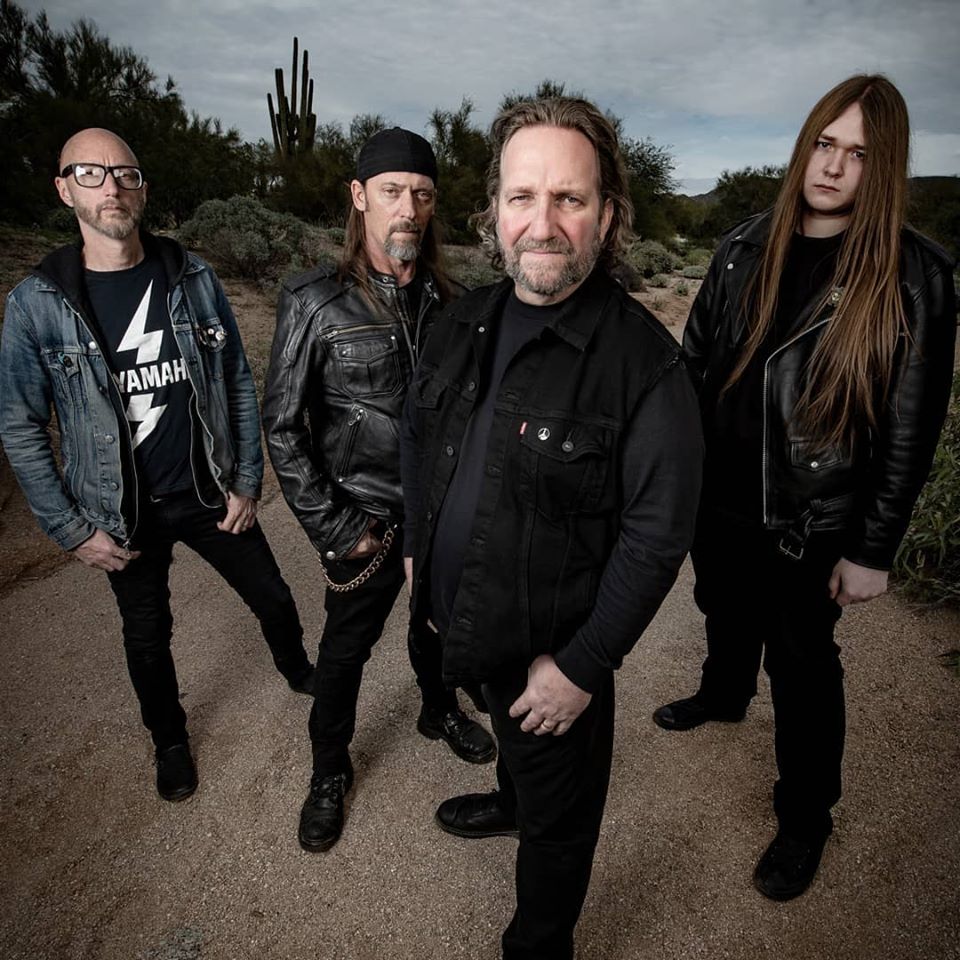 After being stuck in rush hour traffic and those heading for the Wolves match at Molyneux, for an hour, I finally get to KK’s Steelmill . Nearly 45 minutes late for my interview with Jarvis from Night Demon, (see below for the link), but he was ok, such a nice guy. After a chill in the bar for half an hour, the first band take to the stage, so let’s check them out.

Birmingham heavy metal band ERADIKATOR have been around for nearly ten years. When they first started out they were thrash metal merchants with a capital T. Recently with the new album ‘Obscura’ in mind, they have decided to widen their approach. No longer the ear drum shattering and pounding songs, that we were accustomed to. This latest twist sees Eradikator in a new light and it’s quite impressive. The change certainly works for supporting Sacred Reich tonight, who are more classic heavy metal than outright thrash themselves. A few on the set list from ‘Obscura’,  which is a concept album, a format that is making a comeback at the moment. It covers the stages of how we deal with grief and the journey it takes us on, pretty heavy and thought provoking. Watching them live, I wasn’t immersed in any journey, however I did enjoy the set. Best wishes to drummer Jon, as he didn’t look very well, hope you’re feeling better.

NIGHT DEMON are a trio from Ventura California, they’ve been going since 2011 and are, what can only be described as an American version of a NWOBHM band. Influences listed are all your usual suspects, including Maiden, Priest and Metallica. The numbers tonight are fro the 2 albums, ‘Curse Of The Damned’ from 2015 and ‘Darkness Remains’ that was released in 2017. It is a fast and well choreographed performance, bass player and vocalist Jarvis Leatherby, alongside Armand John Anthony are in perfect step with each other. They must have done this routine a thousand times and it is somewhat different from what you normally see with heavy metal bands. I like the background distortion between the songs and the way they face the amps to get even more feedback. Drummer Dusty Squires adds solid thumping to the set and is constantly head-banging away. Armand is a joy to watch, shredding at every opportunity as he races around the stage. The set is played fluently and their mascot ‘Rocky’ makes an entrance during ‘The Chalice’, a cloaked ‘skeleton’, brandishing a silver goblet. Ok the jury is out on that bit, I didn’t find him that terrifying at all ! Having toured in the US with Diamond Head and Raven numerous times, they are now keen to return to our shores, so watch this space. Quite an entertaining band.

SACRED REICH go back to 1985 would you believe and apart from a 6 year break in 2000, have been pounding the beat playing alongside every metal band you can think of. Part of that second wave of thrash that saw Testament and Death Angel rise up. The Texan’s still include original lead guitarist Wiley Arnett and Phil Rind on bass and vocals. I enjoy this type of thrash, after all these years it’s more like classic metal to me. Sacred Reich are enjoying a comeback and the new album ‘The Awakening’ is very much on par with the earlier revered ‘Ignorance & Surf Nicaragua’’, Independent’ and ‘The American Way’ albums. Of course we get a wide range from the past during the evening, but they start with ‘Divide And Conquer’ and ‘Manifest Reality’ from the new release. Dave McClain has rejoined them on drums and the lineup is completed with youngster Joey Radziwill on rhythm guitar. After ‘One Nation’ from the first album, there is more from the 90’s with ‘Love….Hate’, ‘Free’ and ‘Crimes Against Humanity’. The venue is heaving now, some very enthusiastic fans keep the party going and it’s quite a storming atmosphere.

Rind is an expert on how to interact with his audience, asking how old are you to some of them, (glad he didn’t ask me! ) and where are you from to others. No tension, very friendly and they carry on with ‘Ignorance’ another one from 1987 and ‘Salvation’ and ‘Killing Machine’ from ‘The Awakening’. Arnett has lost none of his ability to shred and belt out some fast riffs with 100% control. ‘Death Squad’ is the classic thrasher that brings this show to a finale, heads are banging and fists are in the air in unison.

I haven’t seen Sacred Reich live for over 20 years, tonight it was like traveling back in time. Still a good experience and hats off to the support bands who were both very capable.