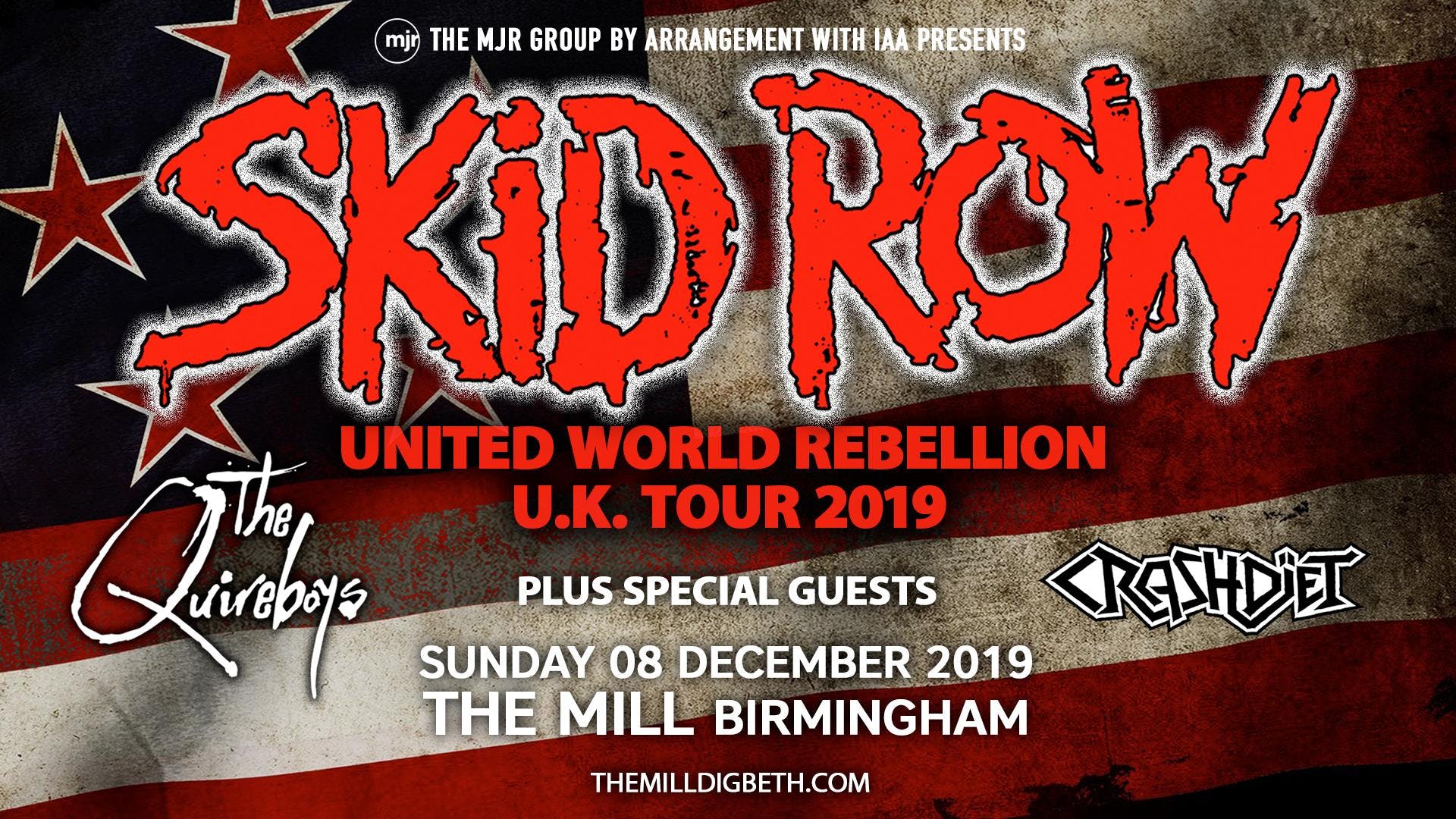 As I can’t do any of that centre ground nonsense as I have to love or really care about a band, And if I’m going to write or review a band then it has to come from within. The vibe I feel following them. The vibe of the band projected outward from the stage. The vibe felt from the fans/crowd. As a long serving “Skidster” we march on…

Sunday: A day of rest and hangovers. But this wasn’t your average Sunday. For this Sleaze infused slightly greying Glam-Goth – it was one of sheer joy.

The venue this night was The Mill, a venue I’d heard of but not visited until now. Along with my residential carers for the night (Caz Parker and Alexandra Peace) – we went into the venue. We looked around as we stepped in at what a fine smaller venue it really was. Before we knew it – the gig was already about to start.

Matt Mitchell and the Coldhearts

I admit that Matt Mitchell and the Coldhearts are a band I had not looked into until recent times (shoot me for being a twat for not doing so sooner). Before we knew it they had taken to the stage early as the venue was filling and as I scrambled to buy drinks. And what a start it was. These bad boys were really on form. Now I was already familiar with Furyon and Colour of Noise with Little Angels’ Bruce John Dickinson. I was tempted to focus and find out more. Such a tight and solid opening set. I couldn’t fault them and now I’ll have to buy the debut album.

Now the support slots felt a little too short. Immersed from the opening with a solid presence it was over before I knew it and we found our space with a good view stage right. I’ll be seeing these lads again ASAP.

Short change around times between sets and bumping into various familiar faces – the room was already in flow. Crashdiet were the next act to take to the stage. Now I had bought ‘Rest In Sleaze’ way back when upon it’s initial release and ‘The Unattractive Revolution’. I kind of swung myself away after seeing them a few years later. But that was then – this is now. There I was earlier this year after listening to ‘Rust’ and that felt more acquired to my tastes than previous offerings. The boyz took to the stage and from start to finish they had delivered a solid set – which was more like visual and audible porn. Vocalist Gabriel Cruz owned that audience for those 30 or so minutes. It was like watching a teaser on some form of adult channel after seeing some of the female fans eyes locked as he jumped from the stage to the crowd from the opening bars of ‘Reptile’ to closing on ‘Generation Wild’. On form is practically an understatement.

We then get to that point where I’m helping drunken reprobates get down stairs (you know who you are) and meeting new faces along the way. The wrapping cleared away from the first two presents of this festive orgasm where you can only edge yourself for so long. Hungry for more and a slightly warm Carlsberg in hand, I began to let go…

Now we get to The Quireboys. A band I hadn’t seen in many years but followed along the sidelines from my first taste in the early 90’s. As much as i’ve featured them and Spike’s various recordings on The Rock N’ Roll Penitentiary – it was time to take another bite live.

As the band took to the stage I felt like Augustus Gloop drinking from that chocolate river (It’s a glandular thing). I’ll be upfront – I was too busy grinning from ear to ear to take too many mental notes. It felt like I’d jumped back in my ageing years, but I had just lost myself from being immersed on how they were owning not only my eyes and ears and to the crowd from that stage. All of which was absorbed like a sponge. From the opening of their set with Hey You and There She Goes Again and This Is Rock N Roll to Sweet Mary Ann – I was bowled over. I was too enamoured with the glow that shone from the fold-backs to the keys and drums in the back to numerous “Yeeeehawwws!”. Then the obligatory “What Time Is It?” as the lads burst into 7 O’Clock.

What a fine start to a Rock N’ Roll Christmas! Seeing our headline act just off stage – where can it go from here???

Oh Say Can You Scream: The Evolution of Skid Row

Now we get to that one band that really shook my musical foundations and the natural solid transition as a youngster with a wider awakening of genres. But not just genres, but one of 3 bands of that period… Tigertailz / Enuff Z’Nuff… however at the top of that list was Skid Row. Sure enough there were others that came close for me personally but old school stories aside – this is where it happened.

And I say this as where we have to really disassociate from then and now. Yes – we really do have to go there. I’ll say this straight across the board with the deepest respect for band and the fan-base alike. Believe me – this is something that matters before I continue.

Sure we all knew, owned and wore out copies of the self titled album, Slave To The Grind, B-Side Ourselves and through to the days of Subhuman Race which was imprinted into our DNA. Subsequent releases under various line ups with Johnny Solinger taking vocals on Thickskin, Revolutions Per Minute and United World Rebellion (Pt. I & II) – the band had carried on despite additional line up changes etc. But we have to get back to the core… What made us love Skid Row initially. Skid Row was a unit and a collaboration that made it work as a 5 piece.

I have to and will say that my poster boy wasn’t Seb Bach. No… I say this with full and solid respect to him with what he delivered. Bach will always be infused in the bands history alongside the steel foundations. Those foundations are Sabo and Bolan who were there from day one. This added as there will always be a formulaic response on the scene to the band of where they were then to who they are now.

So who was my poster boy? It was Rachel Bolan. My posters of Skid Row (if my parents would let me put them up at that time) were more promo pics and shots of the band (more so Bolan) from various magazines. As a former musician respecting the whole band, Bolan just shone. Like an indiscreet flutter of teenage angst from mind, to soul and to my underwear (Yes… But we won’t go there).

I stood there and the band took to the stage. Not knowing what to expect after not seeing them for so, so long… It wasn’t long before the vibe had intensified.

Vocalist ZP Theart (who I had already admired previously with Dragonforce) belted out Makin’ A Mess and I was taken back. Scotti, Rachel, Dave and Rob played as one tight unit from the get go. The low sound levels on the Mic initially meant you had to listen very closely before it was rectified – but I was on another plain altogether. Then I had that familiar feeling… back in a day where I had no responsibilities, my old man complaining about what he classed as noise coming from my turntable as I stuck two fingers up to the world and everything else. It felt somewhat emotional yet content, too familiar. But to quote Ted Poley in a sense – “I’m Coming Home”.

Then I was enamoured watching the band play as though they were on a high at the end of their United World Rebellion Tour in the birthplace of Metal as their set erupted and elevated the room:

That hard edged street punk vibe dripped from the rafters and balcony onto a sticky mess that was everybody on the floor. There was a dude at the side of me singing his head off, two ladies to my rear (Cheeky) on another level and the crowd were screaming.

And then we got to ‘I Remember You’. ZP started with the first two lines then something clicked and it hit me like a ton of bricks. I welled up… like I was in a “WTF dude” moment. Something that has only happened to me one time before at a Queen + Paul Rodgers gig. That wasn’t a nostalgic vibe. That was what I had experienced there and then (Thanks boys). Hoping my guyliner had not ran I pulled myself together.

I sang along to the point of a dry and sore throat from the start of the set and moved back from the MMH team and cavorted with friends as I continued to watch from a distance. A “Chug A Beer” contest between Snake and Spike on stage and some equally huge shared love between them – the band then played on…

Scotti smiling from left to right. Dave almost semi glued to the left of the stage (but content), Rob firmly behind the skins, ZP screaming and seeing a mass of hair in flow and Rachel doing what he has done since time began: A band really knocking it out of the park. There was an element of pure joy on that stage as well as the crowd. End of the tour, end of the year, end of the decade.

Bladder full and a possible golden explosion imminent – I didn’t want to move through any part of it as the band closed their set. And as we all know where Park Avenue leads to… we saw them close on Youth Gone Wild with giant balloons being bounced from every corner of the room.

And even with a smile raised even as I type this a few days later – Mr Theart stating new material was coming soon… Was it all worth it? Without a fucking doubt! Can I wait? No I fucking can’t!!!! Bring it on!!!!

For me – Skid Row really, really nailed it.

**Huge thanks to all bands – but especially Rachel Bolan, Caz Parker, Alexandra Peace and also Miss Richards for making it a night to remember**

The Quireboys – This Is Rock And Roll