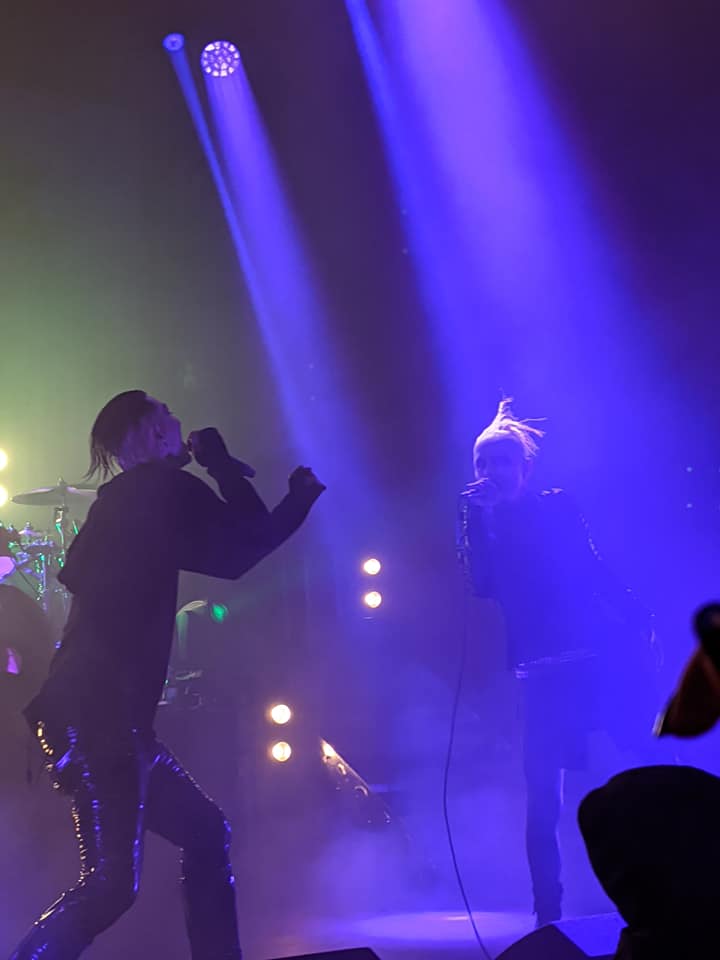 With three days left of the “Disguise” Tour, I had been waiting impatiently for the 12th to come around. I was pretty excited to see this gothic metalcore band return to Kentish Town for a night of ruckus. It had been five years since Motionless In White had graced the O2 Forum with their presence, and each time I’d seen them live before it was nothing short of energetic. So what did 2019 bring us?

It feels like there’s just constant cheering from the get-go. Chris adorns the same shiny pants I’ve seen him wear several tours prior, its smells of sweat, and the elbows of the pit are ready – I’m home! There is a street lamp on each side of the stage, and the general lighting creates a really nice mood. The purple and yellow colour choices remind me of “Creatures”.

Ex-Ice Nine Kills member Justin Morrow joins Motionless In White for the first time touring as their bassist. From the moment he is on stage I really like how much he fits in with the band’s aesthetic, blood down his face and luminous green hair. He puts on a bit of a persona too, making a few twitchy moves and pulling faces. Yep, you got this down to a t!

A huge highlight for me was their performance of “Final Dictvm”. This song is a scarce one, so you’re lucky to catch it live if you do. The icing on the cake was Tim Skold taking centre stage with Chris Motionless, and seeing the duo perform it together. For reference, catch our heading image to see the sweet serenade I managed to catch from the crowd. It’s really a match made in Hell, and an opportunity well played.

“What should we play next?” Chris opens up for suggestions, kind of knowing what the answer was going to be. The crowd erupts with “Another Life”. “Good because if I have to play Abigail one more time on this tour…”. The audacity.
This is the second highlight for me. Again, it’s not a song usually played live. But it is one of their strongest songs on the Disguise album. Having said that, how could they not inject that track in there after the immense response they received from the recently released music video? After a mere six days the video had received over 1 million views on YouTube. The crowd went absolutely wild, and sang every single word.

Encore time. Fans scream as each member makes their way back to the stage, getting into position to play one final song. “Eternally Yours” . It has now become a signature thing at every gig for Chris Motionless to throw roses into the crowd during this track. Cue the doves! Confetti cannons eradicate any chance I have of being able to see a hand wave in front of my face, but it’s worth it for that last shower of love.

Overall, a great gig. I enjoy watching MIW play live because there is always energy and there are always props. Even the smaller, simple things help to create an atmosphere. Relying on your talent alone to immerse a crowd isn’t always the strongest performance when you’ve been playing gigs for 10+ years. No one just goes to see the guy stand in one spot singing for 2-3 hours. It’s all about the way the whole experience makes you feel, from fighting to catch that pick or turning your phone light on to help illuminate the entire venue – people go to feel a sense of belonging and inspiration. That is something that Motionless In White always create.

My only gripe for this tour was that the set list seemed very light in comparison to their past performances. There were more songs that could be sung along to, and the heaviest track of the night was “Devil’s Night”. I’m always left a little woebegone when “Immaculate Misconception” doesn’t make an appearance. But at least on the plus side Chris let it slip that MIW will be back in Summer 2020 (cough, was that a maybe?).