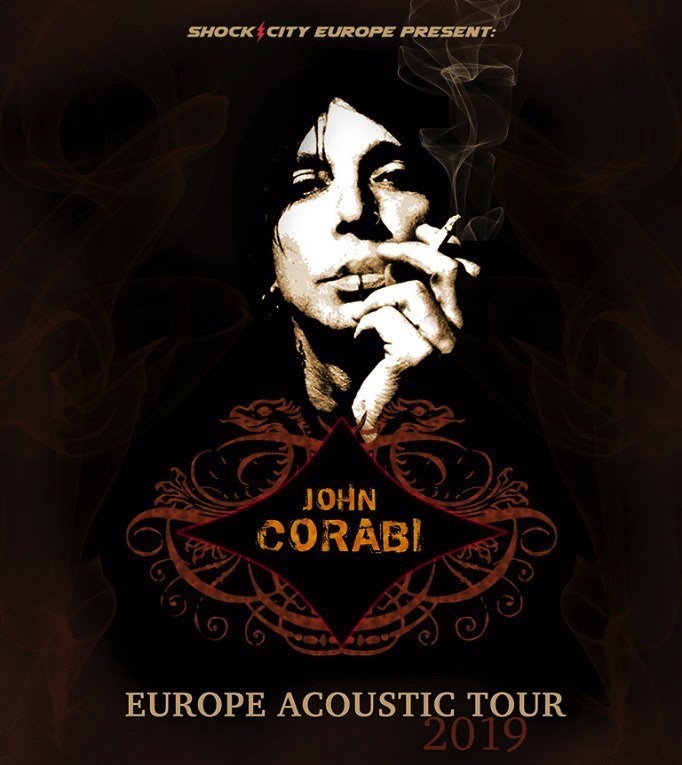 It isn’t just anyone that I will brave the rush hour traffic on the M42, in the pouring rain for. But the promise of seeing the ex Motley Crue vocalist, performing a solo acoustic show, was too much to resist. Two hours it took to get to the QUEENS HALL , however I was still early and able to grab a drink in a local micro pub, before heading to the CREW BAR and the venue upstairs. I do recommend this place, very friendly and a decent size stage and bar.

With no support tonight, JOHN CORABI took to the stage around 8.30pm, amid cheers from the many that stood around the room. I honestly didn’t know what to expect from the Philadelphia born rock star, how is this going to pan out I wondered? However, no need to be concerned, Mr Corabi is a true professional and after a warm welcome and introduction he plays ‘Love ( I Don’t Need It Anymore )’ from his days in ‘Union’ alongside former Kiss man Bruce Kulick. After one of his original writings ‘If I Never Get To Say Goodbye’, it is beginning to dawn on me what an excellent guitar player he is, I mean we all know how great he can sing, but he handles the 6 string, semi acoustic like a master.

A little nostalgia during a cover of Creedence Clearwater’s ‘Who’ll Stop The Rain’ very apt for tonight and JC is in total control. Of course we are entertained in-between every song with tales of his past exploits and career to date. Making us laugh with his stories about Aerosmith, a love for Steven Tyler and his impression of the vocalist, which is hysterical, this all leads into ‘Seasons Of Winter’. A few from the Dead Daisies, which John fronted until just recently, ‘Dead And Gone’ from the 2018 album Burn It Down, then ‘With You And I’ and ‘Something I Said’ both from the Revolucíon album of 2015. Loads more memories shared about his time with Motley Crue as he then leads us into a sing along with their classic ‘Hooligans Holiday’. Then most beautiful serenade of ‘Drive’ by the Cars, just awesome. Loads more banter and thank you’s before he ends on ‘Man in The Moon’ an early Scream song, who John was with from 1989 to 1992.

Talking to fellow attendees after the show, the feeling is mutual, what a brilliant evenings entertainment. John Corabi, you nailed it, as the saying goes. Unless you live in Ireland, there is little chance of catching him on this tour, as he is in mainland Europe, before he returns to play Dublin 20th and Belfast 21st December. However check out the website HERE on how to purchase the solo albums.

If I Never Get To Say Goodbye – Corabi

Dead And Gone – The Dead Daisies

With You And I – The Dead Daisies

Something I Said  – The Dead Daisies

Man In The Moon  – The Scream

Special Thanks to Rob Duncan for his generosity.