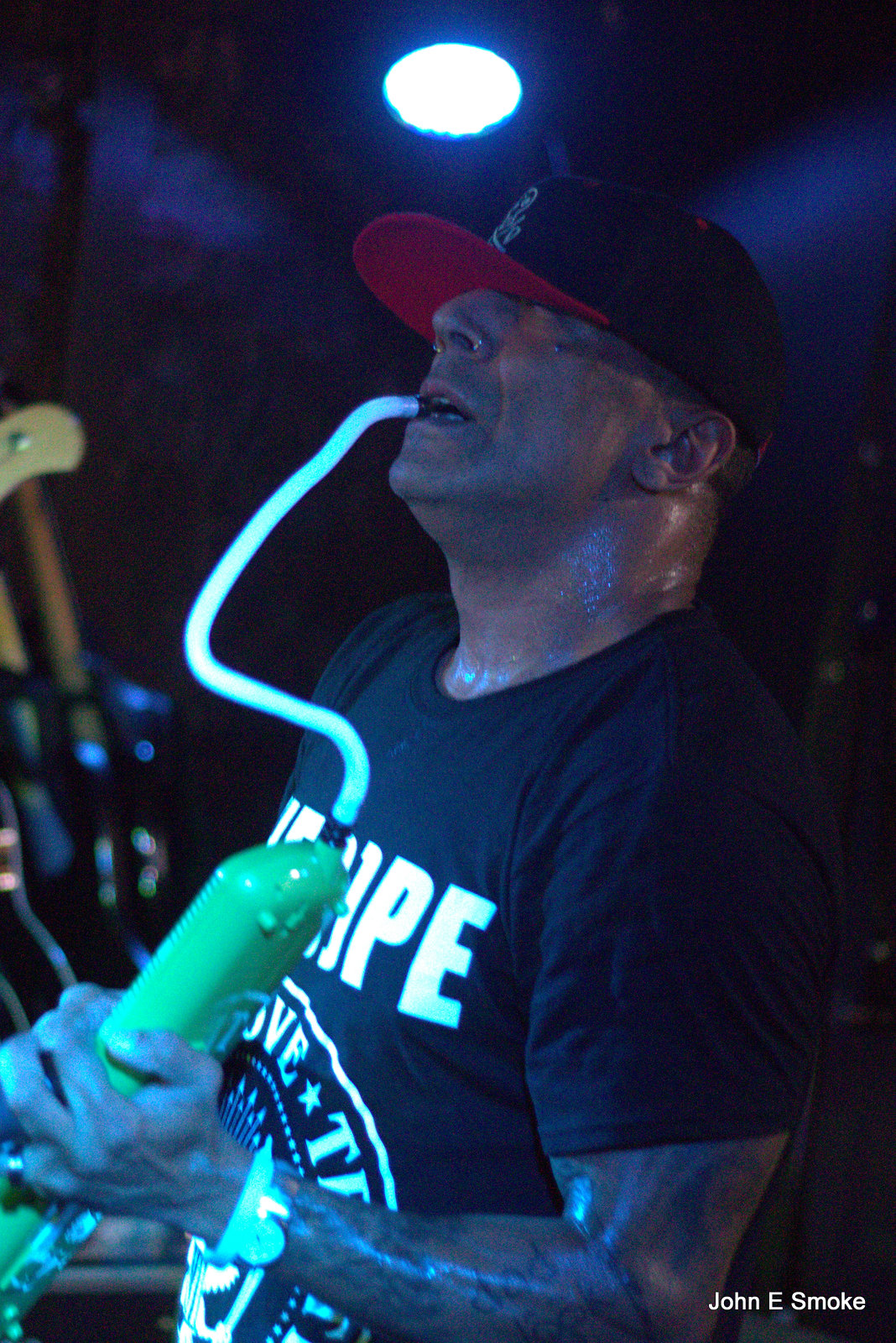 A mere two years ago Stafford was a black hole on the music map of the UK. Not even a black hole, at least black holes suck in light, all Stafford sucked in was betting shops and new houses for commuters who work in better places. Then the unlikely happened, a man by the name of Neil Simons had a vision that Stafford could support a music venue that bands from outside Stafford and even beyond the UK would want to play. The Cellar Bar opened and succeeded, proving to be a launchpad for the venue for tonight’s gig, Red Rum, which tonight plays host to the much respected Californian crew (hed)p.e.

There is more though, three bands more, as tonight’s bill is a packed one. First up are local heroes THOSE SNAKES. Now, there is a danger that I may be a little biased as half of the band are friends of mine. Neutrality mode engage! For the uninitiated, these four very metal guys ply an interesting blend of old school thrash riffs, low and heavy stoner vibes and a hint of something more progressive. They aren’t just a local band though, the wider world should take note. Their material is interesting, tool-esque bass flourishes and subtle fretwork break up the otherwise heavy slow/fast band dynamic.

Second band to hit Red Rum’s small but perfectly formed stage are London’s BLACK ORCHID EMPIRE. Probably the least ‘heavy’ band on the bill, this three some still engage the crowd with their take on alternative and melodic rock. This threesome are extremely comfortable in their own skin, delivering a polished and confident set of well composed alt-rock songs. The press often draws comparisons with Foo Fighters and QOTSA. I can’t really hear this, and I’m no expert on this style of rock but to my ears Black Orchid Empire are more progressive in sound, like early Muse without the histrionics, a hint of A Perfect Circle and not unlike fellow Brits ESO (formerly Esoterica). A fine showing for a band flying the flag for solid British rock music.

When CONVEYER take to the stage, things gather a certain intensity, largely (but not entirely) due to the energy of the frontman who prowls the dance floor in front of the stage like a barely caged dangerous animal. This Wisconsin hardcore mob take no prisoners tonight with a furious set that is intense almost through its entirety, only allowing the audience to catch breath during a few more melodious sections, before blasting out their muscular mayhem once more. Bringing to mind the angrier sound of At The Drive-In and the clout of Converge, Conveyer were impressive tonight.

Hed PE, or (hed) Planet Earth, or even (həd) p.e., were often lumped in with the nu-metal crowd, not the most comfortable fit, but many hear tonight will have given themselves sore necks to some of the band’s more well known tracks from that era. In truth though, Hed PE never went away, releasing a steady stream of albums and EPs, with their tenth full length ‘Forever’ landing in 2016. This isn’t an exercise in nostalgia, this is a gig that is rammed to the rafters with fans both new and old who have come to see a unique band that continue to have something to say, and we’re all ears.

They don’t hold back at all, starting the set with some of their best known material, albeit with a slightly more reggae feel which is great to hear. ‘Killing Time’ proves as popular as ever, with front man Jared playing some wicked melodica. Bob Marley cuts ‘One Love’ and ‘Buffalo Soldier’ and then thrown in the mix with ‘Let’s Ride’ before further classics are thrown to the eager crowd. Highlights are ‘Backout’, ‘Raise Hell’, ‘The Meadow’ and the ever classic ‘Bartender’ during which Jared asks the barkeep for our best local ale, not sure what he got was local though. Chug it he did though at the insistent request of the crowd. Jared is a charming and engaging front person, humorous and personable. His personality I think is a huge part of the Hed PE experience and tonight he had the audience in the palm of his hands. He may now be the only original member of the band, but his team tonight are a tight unit, and seemingly a family, all giving their heat and soul. My only criticism really is that as far as I could tell all the material was culled from their first six albums, and there is some great material on the more recent albums too that would have been nice to hear. However, I still left the venue buzzing, as did pretty much everyone else.