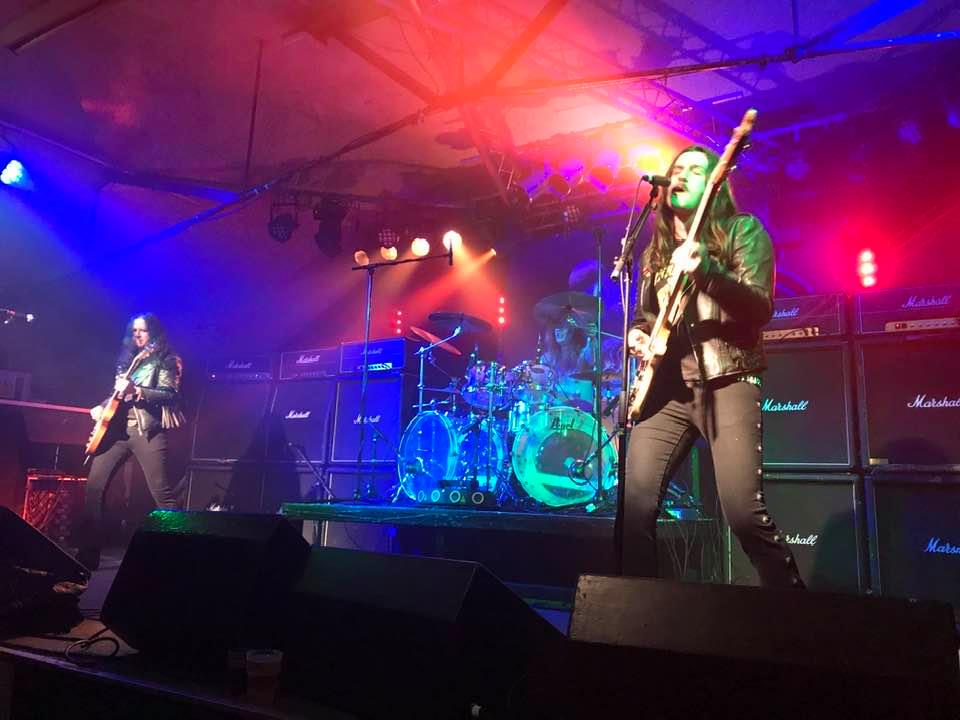 A trip up to The ROBIN 2 on a Thursday night, to see three bands, well why not ! Ok the room wasn’t heaving, but a fair crowd joined me to watch some serious heavy metal.

First support comes from THE MIGHTY WRAITH, a Birmingham / West Midlands outfit that have been knocking about a few years now. An appearance at Bloodstock in 2015 saw them gain a major foothold. Fronted by the captivating Matt Gore who, dressed in black with studded gauntlets, provides an unrelenting barrage of unsuppressed vocals. With just a short set of 30 minutes, they are straight in with ‘Conviction’ and ‘Dragonheart’ from the latter titled 2017 EP. It’s all in the fast paced Maiden and Priest style of things, with the guitars tightly knit. In fact they cover Maidens ’Number Of The Beast’ for their third choice of song. The last two are from the Outcast EP, ‘Omniscience’ is a track of substance, pretty epic in proportion. It has some striking guitar riffing too. ‘Outcast’ is another with the Maiden feel, strong and steady rhythm from the band with the vocals hard hitting and somewhat dominating. With a new bass player tonight, they did exceedingly well, definitely a band worth watching. See them at the Breaking bands festival in May, or visit the Facebook page for more information HERE.

After a brief intermission, SEVERN UK take to the stage. Much in demand, this 4 man crew from the Wolverhampton area, seem to be appearing on a lot of festival and gig lists recently. I haven’t heard them before, so when they start playing ‘The Pacifist’ with it’s mean and ugly guitar, I am surprised with the melodic vocals that follow. The same with ‘Bleeding To Survive’ thrash guitar and mellow harmonies, very much like how Stone Sour often turn it about. The track ‘Love To Let You Down’ does refrain from the harshness a little, as it does consist of some strident drumming, but it’s more of a simpler rock song. Severn UK, do have a unique approach though and it’s refreshing to hear so much emphasis on the lyrics and singing with the thrash undercurrent. The excellent ’Dissident’ and the grunge based ‘Face Down’, with its Alice in Chains take, complete the performance. They have only been together a couple of years, however they have some  interesting ideas and it will be good to watch how they progress.

Headliners ASOMVEL go back to the early 90’s when bassist and vocalist Jay Jay Winter formed the band with his friend, guitarist Lenny Robinson. In true metal style they stormed their way through the decades, with a liking to Motorhead and Metallica. When Jay Jay was tragically killed in a road accident, Lenny decided to carry on with Asomvel and these days Ralph, Winters nephew, has stepped into his uncles boots. Ralph is undeniably a ringer for the late Lemmy, he unashamedly wears black studded jeans with a bullet belt slung on his hip and even throws his head back on occasion, just like Mr Kilmister.

The first half of the set is a complete run through of Worldshaker, the recent album and Asomvel’s third to date. With Marshalls stacked high, the three piece just race through the numbers, with unrelenting and unstoppable pace. Ralph storms about the stage, brandishing his bass and throwing out gravel laden vocals. ‘Paybacks A Bitch’ has a distinctly smoother stance and there are some awesome licks from Robinson. Drummer Jani Pasanen is a marvel to watch, he never lets up either. ‘Reap The Whirlwind’ has some more classic sticks from Pasanen and ‘Every Dog Has Its Day’ is delivered even faster than the others. Incredible guitar on this one, winding up and down, gives the number some subtle groove. ‘The Nightmare Ain’t Over’ is the last off Worldshaker’, then we go back to 2009 for ‘Kamikaze’ and ’Stone Cold Stare’ with a chorus we can join in with. In between there are a couple from Knuckle Duster, of which ‘Cash Whore’ is performed with effortless speed.

It isn’t until the penultimate song ‘How the Mighty fall’ that we get a major change in tempo, it’s slower, has a hook and is a cruise rather than race. With the classic ‘Full Moon Dog’ ending the show, this has been a trip back to classic speed-metal heaven. Seventeen songs in just under an hour, there was no time to even catch your breath.

Yes, many argue that Asomvel are too like Motorhead to be taken seriously and maybe that has prevented them from becoming major household names. But these guys play all over the world, are held in respect by countless fans and are out there, delivering the goods. There is enough space in the music world for Asomvel and tonight they proved it.