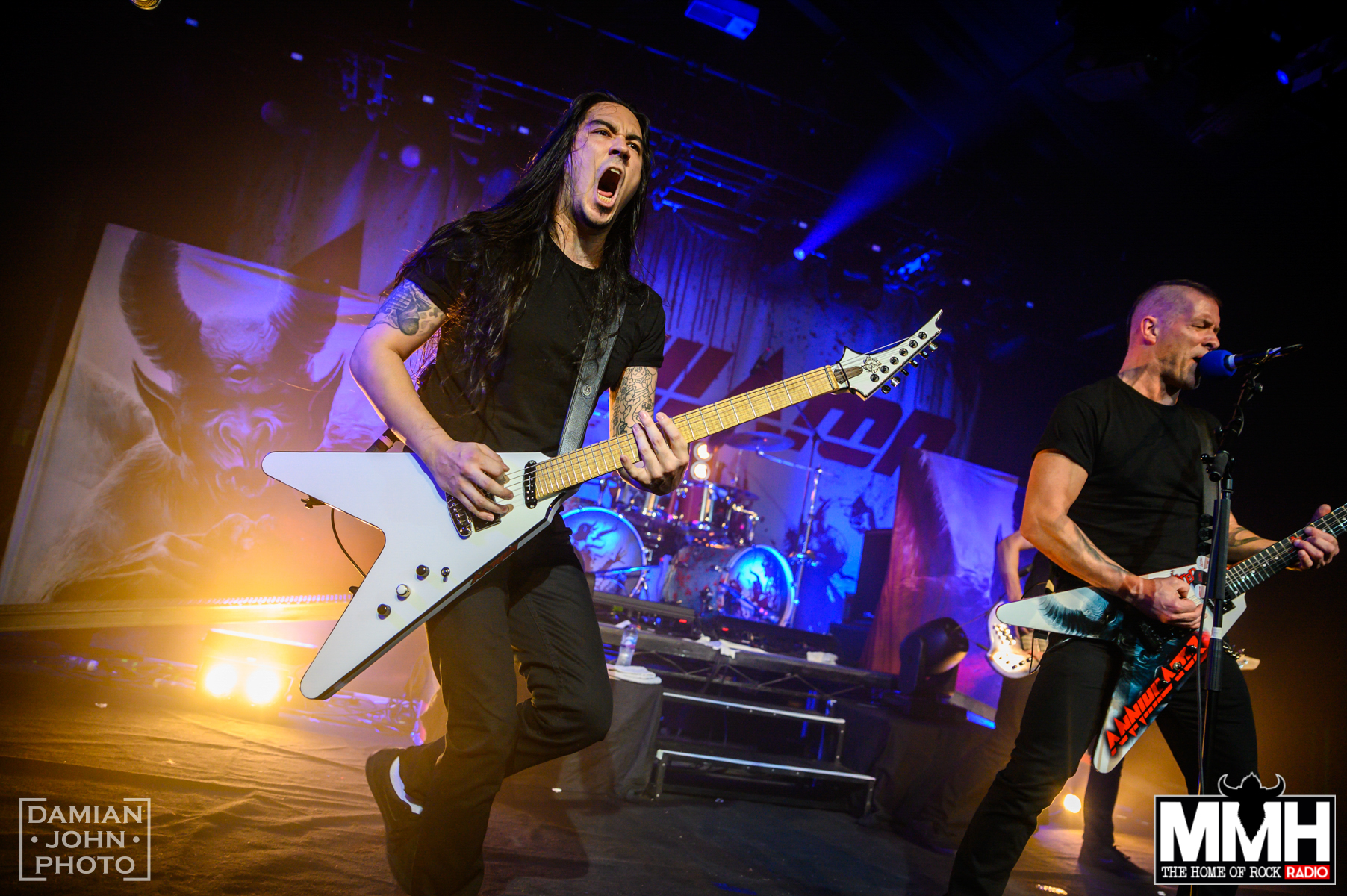 Only my third visit to KK’s, I’m getting to like it, but it’s cold in here tonight. Even KK himself, standing near the back of the room, has his sheepskin on over his leather jacket. Doors opened at 7pm and with no excuse other than running late, I am really gutted to have missed the opening band ELYREAN. When I arrived around 7.45pm they had already left the stage, so apologies guys, but it’s a great excuse to trek out and see you next time. I did take a look at the Facebook page and listened to a few tracks. Thrash with melody from the Cannock band, who are due to release their debut EP ‘Blacken The Sun’ in December.

Main support is from Californians ARCHER NATION, who are three young guys with miles of attitude. It’s not the first time they have toured with Annihilator and they are diverse enough to have supported Queensryche as well. Plenty from the album that came out in February, ‘Beneath The Dream’ tonight, this is heavy metal with hints of thrash and stacks of melodic vocals. The combination makes them fascinating to watch, Dylan Rose on Guitar can shred like no tomorrow and sings with the essence of Bruce Dickinson and James Hetfield. That is where they lie, between the power of Metallica and the dynamics of Iron Maiden. Five string bass from David De Silva adds balance to the guitar work, as they head-bang and swirl around the stage. With Keyhan Moini on drums keeping it tight, they are definitely ones to watch. I didn’t know what to expect tonight, but yes sound, I really liked them.

Headliners ANNILIHLATOR are their nations finest thrash merchants, although today only Jeff Waters remains from the original band. There are over 30 past members, as Jeff often uses different musicians for touring. Formed in 1984 they have sold over 3 million albums, from their 16 strong back catalogue. Often hailed as members of that elite squad, the ‘2nd Wave of Thrash Metal’ that includes Sacred Reich and Sepultura, this band are rock royalty. Not rammed tonight here in Wolverhampton, but a decent crowd and a lot of dedicated fans. They enter with ‘Betrayed’ from 2010, it is a perfect starter, rapid, thumping and altogether monstrous. The atmosphere grows darker and intense as we go back to 1994 for ‘King Of The Hill’, vocalist/ Guitarist Jeff is joined by Aaron Homma to dual on the 6 strings, unrelenting, punishing, you know the drill.

One of my favourites is ’No Way Out’ from the 2013 album ‘Feast’ so glad this was on the set list, angry vocals, an incredible riff and a slower middle that sucks you in. Going to the back of the stage to change guitars after nearly every song and re-appearing to some back tracking, adds to the ambiance, we wait in anticipation for whatever comes next. Having such a massive list of studio albums, there is an abundance of numbers to choose from, we are subjected to ’Set The World On Fire’ which, despite being from 1993 is just as raw and radical tonight. After some instrumental genius, ’Schizos ( We Are Never Alone) parts 1 & 2’ comes out of the cupboard, they haven’t played that in years, this is sheer joy, the barrier is just about holding up. Rich Hinks beckons the crowd to start clapping, he’s a natural and more mobile than your average bass player.

After a stunning drum solo from the Italian Fabio Alessandrini, who I doubt even his mother, was born in 1984, we are back to 1993 again for the suggestive titled ‘Knight Jumps Queen’ which is probably one of those with a commercial chorus, that Waters tries to avoid with the later albums. If you haven’t heard the last album ’For The Demented’ then just pay attention to ’Twisted Lobotomy’ which is heavier than other tracks, but still keeps the momentum going in KK’s. There is a 17th album due in 2020, ‘Ballistic, Sadisitic’ and we get a preview off it with ‘Psycho Ward’. Not giving too much away, it’s well received and proves that Annihilator continue to write turbulent music. After ‘Phantasmagoria’ there is an brief gasp of breath before the encore. Made up of classic ’89 songs ‘Burns Like A Buzzsaw Blade’, Welcome To Your Death – WTYD’, the beautifully contrived, Crystal Ann’ and finally ‘Alison Hell’ it’s a furious ride, right to the end, the fan base down the front are loving this. Annihilator, despite the changes over the years, showed us tonight that quality is timeless.