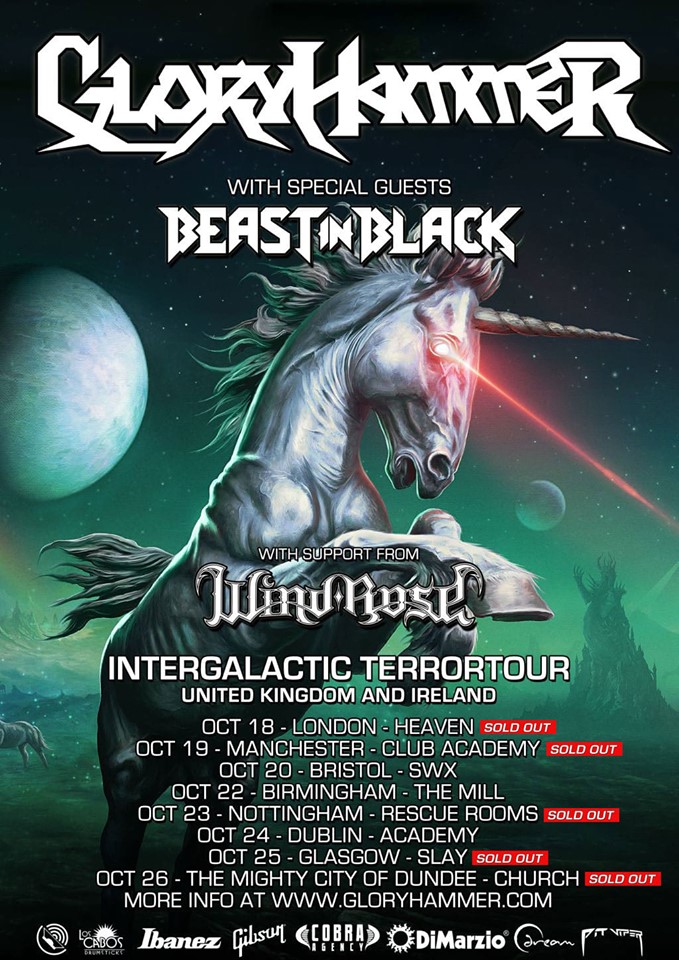 Despite forming in 2010, tonight is Gloryhammer’s debut in Birmingham, bringing their eclectic and always completely ridiculous set of inter galactic battles and hammer wielding to the humble venue of The Mill in Digbeth. It’s a small venue yet a brilliant one for creating such an old school night filled with three assorted sets of power metal.

Due to a complication with door timings, the doors open just as Wind Rose begin playing. Although unfortunate for those at the back of the queue, the audience files in quickly to witness a set that merges folk and power metal together, unified by the rather niche inspiration of dwarves, particularly those created by Tolkien. This goes beyond lyrical topics as the bearded band are practically layered with long fur coats with frontman Francesco Cavalieri sporting some impressive armour-esque shoulder pads that would ensure ultimate protection in late night Digbeth. With a small set of thirty minutes, the Italian dwarves blast through an enthusiastic selection of material that sets the party tone of the night perfectly. This vibe is best summed up through the performance of Diggy Diggy Hole, originally a Minecraft meme and now revitalised as a full-blown power metal production by a band fully dedicated to dwarves. Its another reminder that anything in metal is considered a worthy song topic and no other genre does this better than power metal. Wind Rose conclude their set with the ever popular To Erebor, the song that helped propel them into notoriety with millions of views on YouTube. Live, its simply fantastic with the combination of the anthem like deep vocals and heavy chugging guitars summoning the desire to ride into the deepest depths of Middle Earth. With resounding applause, particularly from one short bearded individual bedecked in a long fur coat, Wind Rose walk off stage assured that they’ve not only pleased diehard fans but have gained some worthy converts to the dwarf cause.

As Beast in Black’s banner tentatively rises, the sheer force of cheers is surprising whilst misleading some individuals into thinking that the band is about to arrive on stage. It’s a key part of the whole of Beast in Black’s set, whether it’s the frequent chants of the bands name between songs or a screech from one audience member to do a full headline tour. People simply adore Beast in Black. Aesthetically there’s nothing revolutionary about the band, whether it’s the knock off Judas Priest attires or the classic gothic style coat that looks as though it’s been brought from the Halloween section of a costume store. Musically the band clearly borrows from their fashion inspiration of Judas Priest and bands of the 80s era. However, critiques aside, Beast in Black have clearly mastered the art of infectiously catchy song writing with the frequent welcome addition of synths to perfect that cheesy edge. The chorus of Sweet True Lies would not be out of place in any of Bon Jovi’s back catalogue and its an effect that has the vast majority of the audience singing along. The sheer energy of the band is admirable, as is the unashamed flashing of frequent goofy grins. This joyful persona is reciprocated across the audience, particularly with two men at the front dancing freely and imitating the bands synchronised moves. This mass of happiness practically explodes when Beast in Black transition into their hit Blind and Frozen, a piece that perfectly demonstrates the impressive balance frontman Yannis Papadopoulos has perfected between angelic femininity and Rob Halford fuelled screams. Its perhaps a nod to founding guitarist Anton Kabanen’s former band Battle Beast and the similar display of vocal diversity in Out of Control. It’s clear that the whole band is talented in their own right and by the end of the set it’s no longer a mystery as to why Beast in Black have such a dedicated fan base.

There’s no dramatic entrance for Gloryhammer. Instead, a life size cut out of Tom Jones is placed on the stage in front of the microphone whilst Delilah plays through the speakers. In full. No explanation is required. After all, Gloryhammer is the brain child of Alestorm frontman Christopher Bowes whose recent antics have included hauling a giant rubber duck across the world purely to be sat on the stage at each show.

As Tom Jones is dragged backstage, Gloryhammer are greeted with shrieks and applause as they open with the epic The Siege of Dunkeld (In Hoots We Trust). Green armour clad Angus  McFife XIII (aka frontman Thomas Winkler) is the perfect dichotomy of an empowering figure who’s inherently ridiculous. His voice does not disappoint in the live set up, ranging from highs and lows all whilst maintaining a dramatic atmosphere and presence. Half way through the opener the evil wizard Zargothrax appears to a chorus of resounding boos that would put any pantomime to shame. Originally the role of Christopher Bowes, Zargothrax is played by touring member Michael Barber who could pass as the Alestorm frontman. Although, admittedly, this is aided by lurking at the back of the stage with his face obscured by a mysterious black hood.

Gloryhammer immediately transitions into the self-titled “laser powered, goblin smasher” Gloryhammer with much hammer wielding and chasing of a small man in a goblin costume, likely an unfortunate member of the road crew. It’s immensely entertaining with the song itself being one of their best tracks for pure heavy metal riffs whilst inciting desires to go forth and whack an unsuspecting goblin. Legend of the Astral Hammer quickly follows as the celebrated hammer takes an intergalactic form with a rousing chorus melody. It’s easy to forget throughout their set that the Mill is a small venue as the sheer power of a Gloryhammer chorus sung by power metal crazed fans sounds nothing short of huge.

There’s at least one song in the set that focuses on each of the characters within the band. One of the most beloved is the Astral Demigod of Unst. Or simply The Hootsman. Or even more simply the bassist James Cartwright. Through the performance of The Hollywood Hootsman, the audience celebrate his existence in the only appropriate way through mass unified shouting of “Hoots!”, continuing beyond the song itself and sounding like a parliament of delirious owls.

On the topic of hoots, Hootsforce is absolutely fantastic live. Its ability to make the audience feel some strange form of patriotism for a fictional galactic military is true testament to Gloryhammer’s song writing abilities and enthusiastic stage presence. This is immediately followed by the encore with the equally brilliant Rise of the Chaos Wizards and a true Gloryhammer original – The Unicorn Invasion of Dundee.

With one final screech of the mouthful of the final song title, there’s a mass of cheesy grins circulating amongst the audience and band alike. Before leaving the stage, Gloryhammer gather together where its announced that the Hootman’s is to become king from protecting the alternate universe of Scotland against Zargothrax. The goblin scuttles back onto the stage and proceeds to present the Astral Demigod of Unst with a golden crown. Its all rather surreal. But in the best way possible.

There is absolutely no doubt that Gloryhammer are brilliant at what they do. Its obvious that the aesthetics and lyrical content is completely ludicrous but by no means are they a parody band. Their ability to creatively link their stories and characters together in a live set up is simply brilliant and the songs themselves are even more epic live. It would be interesting to see Gloryhammer play on a larger scale to see what level of bombastic power they could reach through more effects and greater sound systems. However, there’s a distinct charm to them playing small venues such as the Mill where unicorns, evil wizards, space submarines and hammers are let loose in such a humble setting.