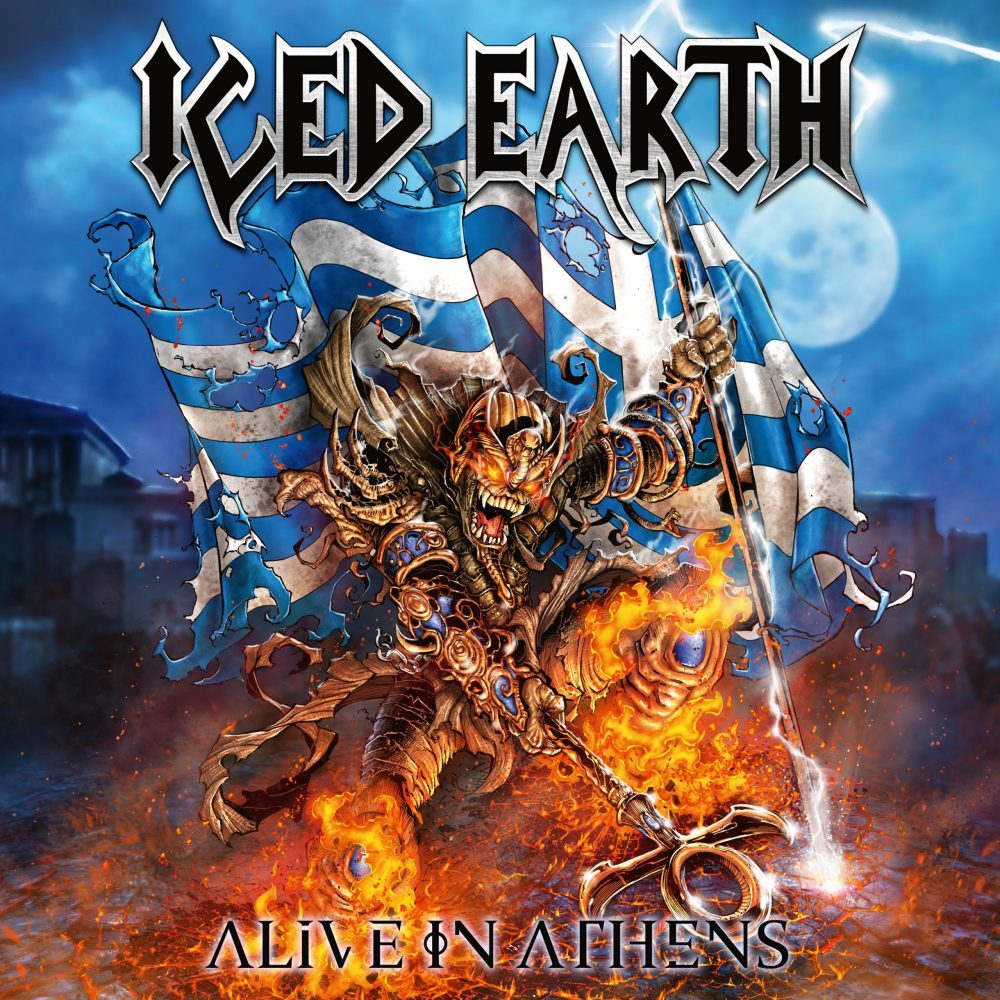 Iced Earth made heavy metal history. The band was formed in 1984 by guitarist and songwriter Jon Schaffer and drummer Greg Seymour, first named as The Rose, then in 1988 changed its name to Iced Earth. Since the release of their self-titled debut in 1990, Iced Earth’s unique blend of heavy, progressive, power and speed metal with touch of opera has won the hearts of many fans of heavy music.

In January 1999 band was performing in Athens. This amazing show was one of the greatest concerts ever performed by Iced Earth and one of the most important in the history of heavy metal. It was recorded and in July same year released as a 2CD, 3CD and picture LP set. The recording quickly gained a warm and positive response from critics and Iced Earth fans. No surprise that it was called a one of the greatest heavy metal live albums of all time. To celebrate its huge success and 20th anniversary, band released a vinyl version including five 180gram LPs, a 12-page LP-sized booklet with liner notes by Jon Schaffer and Matt Barlow, as well as Hakos Pervanidis (Metal Hammer Greece) who also contributed additional visual content and 60x60cm poster.

Alive in Athens 20th Anniversary Edition opens with crowd cheering and screaming the name of the band, you can really feel the excitement, energy and pure happiness of the floor. And I’m not even surprised, they’re about to see Iced Earth, one of the greatest heavy metal bands, performing a legendary show. The sound is absolutely perfect, heavy, clean and clear. It is a pure pleasure to listen to. The Outstanding voice of very talented Matthew Barlow caresses ears and proves amazing vocal skills. He really plays the first fiddle in the whole show with his powerful display of skills and fine interaction with crowd. Jon Schaffer’s rhythm guitar is just insane, precise and almighty. Larry Tarnowski showed his great potential with his lead guitar. Both rhythm and lead guitar combined sound absolutely divine. Bass guitar played by James MacDonough adds a huge depth and expands the sound. Its thundering sound defines the overall perception. Rick Risberg supported the band with his keyboards adding an extra hint of melodiousness. And of course, don’t forget about Brent Smedley smashing drums and improvising being a big cherry on top! Personally, I believe it was the best line up of Iced Earth ever and it is a big shame that it was changed later for different reasons.

The first track opening the show is Burning Times and with just the very first seconds you know it’s going to be an amazing experience. The track list of Alive in Athens 20th Anniversary Edition is the ultimate best of Iced Earth. They chose their most signature tracks and performed them far better than anyone could possibly imagine. Interaction with the crowd is beyond great. Fans are singing along with Matthew Barlow and responding well to anything he says or does. This fantastic energy is felt through the whole concert. It’s what made this show so great. Next song Vengance is Mine really warmed the crowd up. Live performance of Pure Evil is just incredible and bares Barlow’s infinite vocal talent. Another precious moment is Melancholy (Holy Martyr). It’s my very favourite of Iced Earth song. It just has everything a perfect track should have – lovely lyrics with a great meaning behind them, powerful vocals giving a listener strong chills and this is well balanced heaviness with ballad-like sounding of guitars and drums. Travel in Stygian is another amazing highlight of this release. A little surprise with added Colors track that was missing in the original issue. It closes the 3rd vinyl but worry not, there’s 7 more to go. Among the next pieces, there’s more great gems. They all are, but just to name a few: Blessed Are You, powerful Violate, beloved Watching Over Me, Stormrider, Prophecy preluded by crowd shouting ‘We want more!’ and loud cheer as first notes were played, Stand Alone, A Question of Heaven and as always Iced Earth ending the show. The crowd sang some parts of Dark Saga and Dante’s Inferno instead of vocalist and it sounds absolutely incredible. The cheering was going on for a long time after the show ended. That is a type of support every band can dream of.

It was a nice experience to listen to this legendary show once again. Best live performance backed with the best crowd ever. I bet that everyone listening to Alive in Athens 20th Anniversary Edition could imagine themselves by the stage having the greatest time of their lives watching Iced Earth presenting their ultimate best. The bonus of Colors track, nice booklet and a poster are a lovely addition from the band. For fans of Iced Earth and vinyl maniacs it is a must have.

Highlights: Pure Evil, Melancholy, Travel in Stygian, Watching over Me, A Question of Heaven, Dark Saga

Alive in Athens 20th Anniversary Edition is available from 6th December 2019 via Century Media Records/Sony Music and can be purchased here.